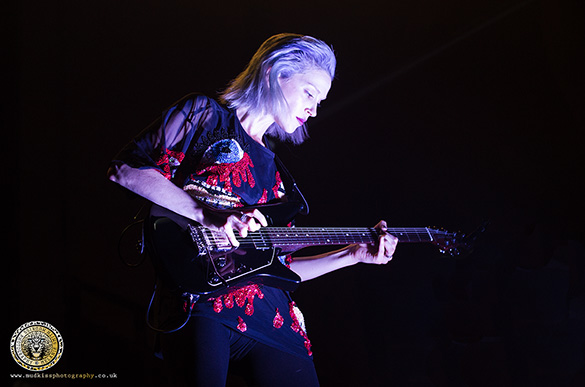 Photo of St. Vincent above (and all others on this page) © Melanie Smith

St Vincent charges into new territory with her latest show, inventive and confident and with the sonic curveballs to divide opinion.

Manchester’s Albert Hall is a great setting to see St. Vincent perform. A former church/bomb shelter/backdrop to Most Haunted and re-launched as a music venue with little in the way of refurbishment to detract from its ornate charm. It set the atmosphere of reverie amongst the crowd, complementing the sound of St. Vincent cascading from the altar.

Annie Clark has developed a confident stride to her performance since the inception of her onstage moniker, no doubt bolstered by universal acclaim and an impressively consistent musical output. This year’s tour began after a gruelling schedule of rehearsals which incorporate choreography and theatrical elements to the show much like those seen with her old collaborator David Byrne.

At times the lack of spontaneity seems stifling for a musician as unpredictable as Clark but on the whole, the rigorously rehearsed set augments the material from her latest self titled and self proclaimed “party record to play at a funeral.” 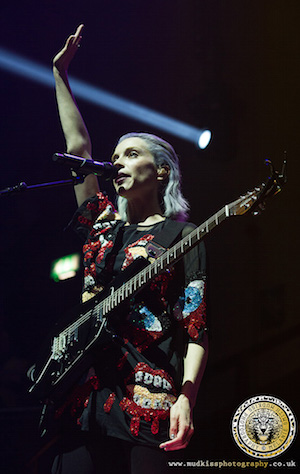 I was first introduced and blown away by St. Vincent after seeing a video of Marrow which reminded me of Zappa’s King Kong when the brass section kicked in. Tonight, the stage is set for four, without the horns of previous incarnations, but despite the omission, the stripped back band deftly manage to fill the room with the avant pop intrigue of her earlier creations.

Opening with Rattlesnake, the set mainly delves into the latest album which is probably Clark’s most accessible work; aided by her ear for melody and chanteuse-like delivery. Judging from the crowd, it appeals to literary snobs, hedonistic yobs and everyone in between. For all the hyperbole and death rattles sounding in the music press about the death of guitar music, St. Vincent is leading the charge into new territory and bringing fresh ears with her.

A lot of new music – not just ‘guitar music’ – has become bloated and stuck in a cycle of its own outdated image and St. Vincent isn’t afraid to incorporate new sounds to shape her vision. When she does choose to play the guitar she is never superfluous, prefering creativity over onanism; a multi-instrumentalist with verve and imagination, schooled in the musical canon of history and creating something unique with it.

Still, by the end of the gig some of the crowd had started to leave. Maybe they had been hoodwinked by her catchier singles?

Regardless, St. Vincent could be a huge pop star if she was that way inclined. Instead, she teases her audience with subversion and sonic curveballs and will no doubt remain independently minded when it comes to her music. Such dedication may not please everyone but her stubbornness is ballsy and refreshing, and will ensure her longevity in an otherwise throwaway culture of dumbed down crowd pleasing and malleable trend followers.