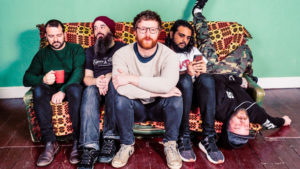 Louder Than War’s Ioan Humphreys gets a first watch of the brilliant new video from The St.Pierre Snake Invasion.

I first heard of The St.Pierre Snake Invasion (TSPSI) in 2013. I had just come off the bumper cars (I’m Welsh alright!) in the always brilliant Y Not festival and someone (in retrospect it might have been Damien Sayell (Vocals)) pressed a paper flyer into my hand and said, “Our band is playing the Giant Squid Stage today. Come and see us!”. I enthusiastically said “Yes we will!” knowing we probably wouldn’t get around to seeing them. But I honestly have never forgotten that encounter for several reasons. Firstly, it shows the lengths that bands have to go to get seen and heard. Secondly, the name of the band was outrageously long and must have referred to something weird. Thirdly, he was so bloody friendly and polite! It just felt nice? Finally, I still have the flyer to this day.

Fast forward six years and the closest I’ve got to listening to, let alone reviewing TSPSI is The Plainviews’ EP that I reviewed here. This EP featured TSPSI’s Damien Sayell, alongside Adam ‘Dev’ Devonshire and Jon Beavis from IDLES and was an absolute banger. The possibilities were endless with this combination, and the reception the release had was universally positive.

Ok, back to TSPSI and June 21st 2019 sees the release of their brand new album ‘Caprice Enchanté’. And ahead of its release is the first single ‘Casanovacaine’ was given its world premier on Sunday 7th April, on the Radio 1 Rock Show. ‘Casanovacaine’ is an immediate caustic noisy assault on the senses. A throbbing bass that runs throughout the track is complimented by the almost spoken word vocals over the top of this chaotic, yet measured 2.22. It’s a blink and you’ll miss it slice of a fast and infectious all out barrage of bass and guitar driven noise. Yet it still manages to straddle the fine line between ‘noise for noise sake’ and a nuanced balance of blistering riffs and pounding beats. It’s just an absolutely brilliant track and I can’t wait to hear the full album from TSPSI. Absolutely brutal as fuck stuff.