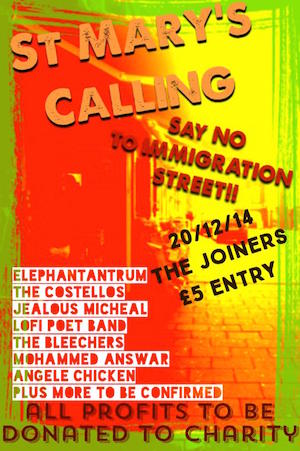 Another insidious show by the makers of Benefits Street has been filmed in Ged Babey’s knocking ground, Southampton, this time with the intent of fuelling hatred towards immigrants. Our man talks to one of the organisers of a protest gig about the show, Paul McGeachie and Marco from the Lo-Fi Poet band.

Even if you didn’t watch it, you must have heard about a TV series called Benefits Street. The makers of it, Love Productions, have made a follow up called Immigration Street and the location they’ve chosen is Derby Road in the St Marys district of Southampton. Opposition to the filming made the local and national media and now Southampton’s musicians want to make their opinions known at a Pro-Diversity gig at the Joiners in St Marys.

I could say that in a way I’m a migrant worker. I came to Southampton in 1984 to find work. Met and married a local girl and stayed. I have met people from all over the world here. People who have their origins in Asia, the Caribbean, Eastern Europe, Scotland, Wales, Ireland… I am from Wiltshire only 20 miles down the road, but, at first, I was treated as an outsider. I was a “carrot-cruncher” but I just took the piss back and pretty soon I was accepted…

Southampton was not the Promised Land, but it’s alright. It’s not a cultural oasis and it has produced good and bad as far as the Arts is concerned. For every Benny Hill there’s a Ken Russell. For every Craig David there’s a Band of Skulls, Delays, Men They Couldn’t Hang and there is a huge, thriving, diverse local music scene covering every genre. A lot of the cities small venues are in St Marys. In the early 80s it was the West Indian Club which was the only venue who would let the local punk co-operative put on gigs at their venue. One of Southampton’s few gay clubs was in St Marys, as were various co-operative run book-shops, cafes and grocers. Derby Road is probably also remembered as being Southamptons Red Light area. (If Channel 4 had made a documentary in the early Eighties it would have been most likely been called Prostitution Street.)

Nowadays Derby Road and St Marys in general is much like any community close to a city centre, cheap lettings  and a population whose ethic origins range from Afro-Caribean, Asian and Chinese (who settled here in the 50s, 60s or 70s and are third, fourth generation UK citizens now) to Eastern European migrants, although they  predominantly live on the other side of Southampton in the Shirley area. It’s not a cosmopolitan utopia but it’s a pretty chilled out area compared to some in other parts of the UK.

Paul McGeachie (who I know as singer with a band called August Riots) is organiser of a No To Immigration Street multi-band gig at the Joiners in St Marys St. I asked him why he personally felt he had to do something in opposition to the programme:

“I feel it’s an attack on my city and an area of the city that I care for very much. I used to work as a labourer for a housing association down on St Mary’s road some years back and played more gigs than I can remember at places like The Joiners, Lennons and The Dorchester, so the area has big place in my heart.

“It’s a real community, much like where I grew up in Shirley Warren. People talk about our identity being taken away, but I believe it’s in these areas that it’s actually being maintained. It feels like Love Productions are holding a sledge hammer over one of our most thriving communities all in the name of entertainment.

“From the group’s perspective; I think as musicians we understand that the importance of influence from other cultures in the evolution of music and can therefore recognise that same importance in the evolution of our society. We felt we had to do something about this and thanks to the support of The Academy of Music and Sound we were given the opportunity to do something about it.”

But isn’t there the danger that you are just adding to the pre-publicity for the programme?

“Yeah that’s always a danger and with things like this you can be dammed if you do and dammed if you don’t. For me though, I’d rather be dammed for doing something than for not doing something. We can’t let people come down to our city, kick a few hornets’ nests, jumping back into their vans leaving us to deal with the consequences; not without putting up a good fight anyway.”

You’re probably too young to remember when Channel 4 started but it was a bold radical ‘alternative’ at first, but now it seems to have gone down to the level of the Daily Mail with programmes like this.

“In my opinion, I think it’s more down to the power of some of the production company’s than Channel 4. I’ve always liked Channel 4. They’ve put out some great documentaries in the past and I used to feel their News programmes were much more balanced than the other channels.

“Now Benefit Streets success was down to it’s to ability to divide, creating mass hysteria on social media with vile comments being made about some of the people that appeared on the programme, some suggesting they should be gassed. Can we really believe they will not engage in the same divisive tactics when it comes to editing and releasing Immigration Street when it was such a winning formula for them?

“I think we also need to question whether there is political motivation behind this series. Is it a coincidence that such a divisive TV programme based on a subject that people have been brainwashed through a media led deluge of hate, fear and misinformation into thinking it’s the only policy worth considering when casting their vote next year? Especially when you take into account the fact that Rupert Murdoch, who is no stranger to trying to influence the outcome of a so-called democratic election, earlier this year purchased a 70% share in Love Productions?”

Marco  from the Lo-Fi Poet Band spent his teenage years living in St Marys and has been back there for the past five years. It’s where his band have rehearsed for a decade.

I find the whole idea insulting. Blame all the countries problems on the poorest in society. The title itself is totally misleading as the Asian communties are now third of fouth generation. I went to junior school with the kids of people who have worked hard and paid taxes all their lives! I’m fearful that they will paint the area as some kinda drug infested no-go hell hole when infact there has only been one shooting in the last five years. Let’s be honest now, Southampton is a port so there will always be drugs. There is just as much drugs action in other parts of the city though.

As for  personal safety, unless you are involved in crime then I’d say its much safer than being in the city centre on a Saturday night.

Marco told me about how vulnerable working girls and addicts with learning difficulties were among the people allegedly approached by the programme makers.

There is a wide range of bands The Lo-Fi Poet Band, Elephantantrum, Accrington Stanley, the Costellos, Jack Jowson, Jealous Michael, Angele Chicken,  Mohammed Ansar and others playing at the Joiners on Saturday 20th December to show a united front against the programme. All profits from the gig will go to local charities. It’s a serious issue but it’s nearly Christmas so it will be one of those multi-band gigs which will have a party vibe to it so if you can, come along.

I chanced upon this video on You-tube, which is a very cool short film indeed made by a media studies student giving his personal impression of Derby Rd after living there. (I have asked Sean FitzGerald if I could include this here, and not had a reply so hope he does not mind. His film paints a far more accurate picture of the Road than Love Productions series will I imagine.)

As well as the gig there is another planned protest on 31st January 2015 by Southampton Communities Alliance (a coalition of local residents, community groups and trade union activists campaigning to promote positive messages on migration in and around Southampton.) They  have  asked  Channel 4 to cancel the commissioned programme  stating that:

“Whilst we respect and support the media’s right to freedom of expression and value its importance in an open society, we believe that the interests of the community and the greater public interest will be not served by the screening of this programme. We do not think that the programme will add to the debate on migration. The majority of people living in Southampton’s Derby Road where filming has taken place have been there for generations, regardless of their ethnic origins. They do not want to be branded as “immigrants” with the associated risk of attracting extremists and potentially violent reactions if the series is aired.

“We are therefore calling upon Channel 4 to respect the wishes of the community by abandoning the screening of this programme and by leaving local people to live their lives without this unwanted, unwarranted and damaging intrusion.”