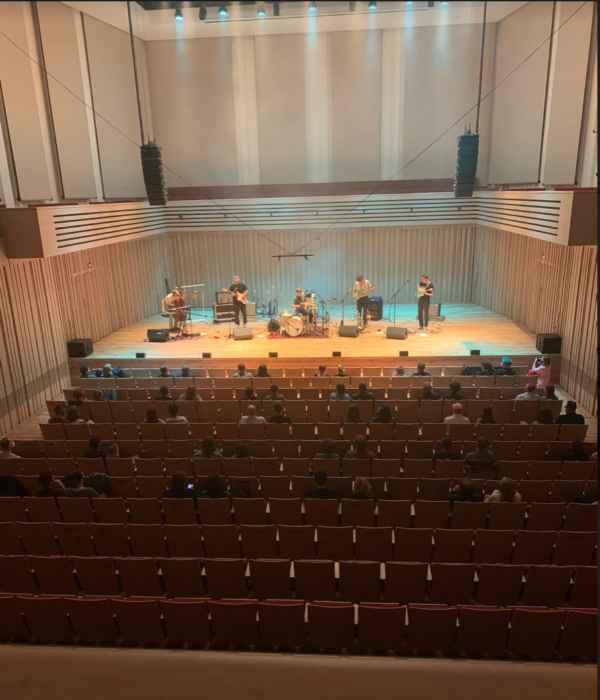 There are so many colliding ideas, shapes and textures on stage as the five-piece Squid wrap their 8 tentacles and two arms around their cubist pop manifesto and create an addictive urgent music as they wrap their pulpoid, jelloid mass around their thrilling rush of ideas that fills the room with their dark cephalopod ink.

The venue may be at maximum capacity which in the Covid times means sparse clutches of people twitching in seats to the eclectic electric beat. Despite this the band are on fire defying pandemics and social distancing.  Just hitting top 5 with their debut album , Bright Green Field, Squid are a glorious reminder that despite these plague times we are truly in a golden musical era. How the fuck can music this inventive, left field, bruisingly brilliant and bursting at the seams with life and ideas and also thrillingly daring and twitchingly compulsive hit the mainstream! It’s a win!

As a veteran of these musical wars from the eighties (many of Squid’s distant relatives are documented in my book about the eighties underground Death To Trad Rock) I remember half-full pubs and a confusion whereas Squid have proven that this life-affirming music is for everyone and that’s a victory.

They have added new textures and levels of sophistication to the sound – there are more guitars peddles than the bands of yore that add textures and sounds to the mix. There are dub effects, weird phasing and a deeply thought out deconstruction of the electricity and it’s highly effective.

Before the gig there was the hum of expectation. The warm evening gently caressing our wan lockdown faces we mingled outside the Stoller Hall. What is this gig thing that we are about to enter? I may have been to a few shows in the murky half-life months of this year but some people look like they have only just emerged from the plague hibernation as they enter the beautiful all seated hall by Manchester Victoria station and sit in socially distanced bundles spread out across the room.

It must be strange playing a gig like this but Squid are more than capable of conjuring up a world to get lost in and for the next hour the band, who are celebrating a recent top 5 album, state a case for being one of the most inventive outfits in the UK.

It’s a stunning show that is restless in its ambition and perfect in its execution. These are the children of the revolution who grew up with their parents’ record collections, then their own thrift store curiosities before working in second-hand record stores becoming completely imbued with music as they formed in Brighton. This cultural mush mash sees bizarre and thrilling reference points pop up all over the place. Their melange of post-punk, prog rock, free jazz, post-rock, skronk and even a hint of new wave pop are updated for the moment we are in.

This is the coolest trick that Squid pull off – this is no retro show – somehow they still have the future urgency of the post-punk period. They still sound and feel urgent. Pamphlets is scratchy agit funk, bringing a no wave urgency and twitching first album XTC intensity and is chock full of hooky guitar lines and bug eyes ‘I’m Bugged’ vocal intensity. G.S.K. deals a lolloping bass-driven cowbell groove and an added hooky weird guitar line.

One moment they are the Brighton Godspeed! You Black Emporer with the cello bringing sombre dark sky thinking mood to the jam they are kicking out, the next it’s the sparse post-punk take on English folk of the genius XTC of Mummer and their excavation of the sonic archaeology of old England. The next it’s the mood swings off 65 Days Of Static before they zip through Zappa and have a Beef in their hearts for the great Captain. There is even a hint of the curious genius of Hugh Cornwall’s guitar lines and eccentric vocal delivery especially with singing drummer Ollie Judge who somehow barks his way through the songs sharing the vocals with his compadres and nailing the metronomic beats.

This is no day out in the hipster museum though. This is music of the moment. They are of THIS time and their intense and thrilling perforce mirrors it.

They hold their cranky and brilliant record collection rock together with the shackles and discipline of krautrock – the glue that binds together so much left field music in our times. What was once esoteric long hair German underground music that was solely for a small clutch off magic mushroom hippies to share with teenage punks like your author has now become its own mainstream. The structure and structure of the hypnotic form creates a base to play around with and buy to Squid play.  And boy do Squid play! They bring a joy to the music, a restlessness to their chronicles and a thrill to their music.

Tonight is a celebration of the imagination and the Squid squad are the champions of the form.