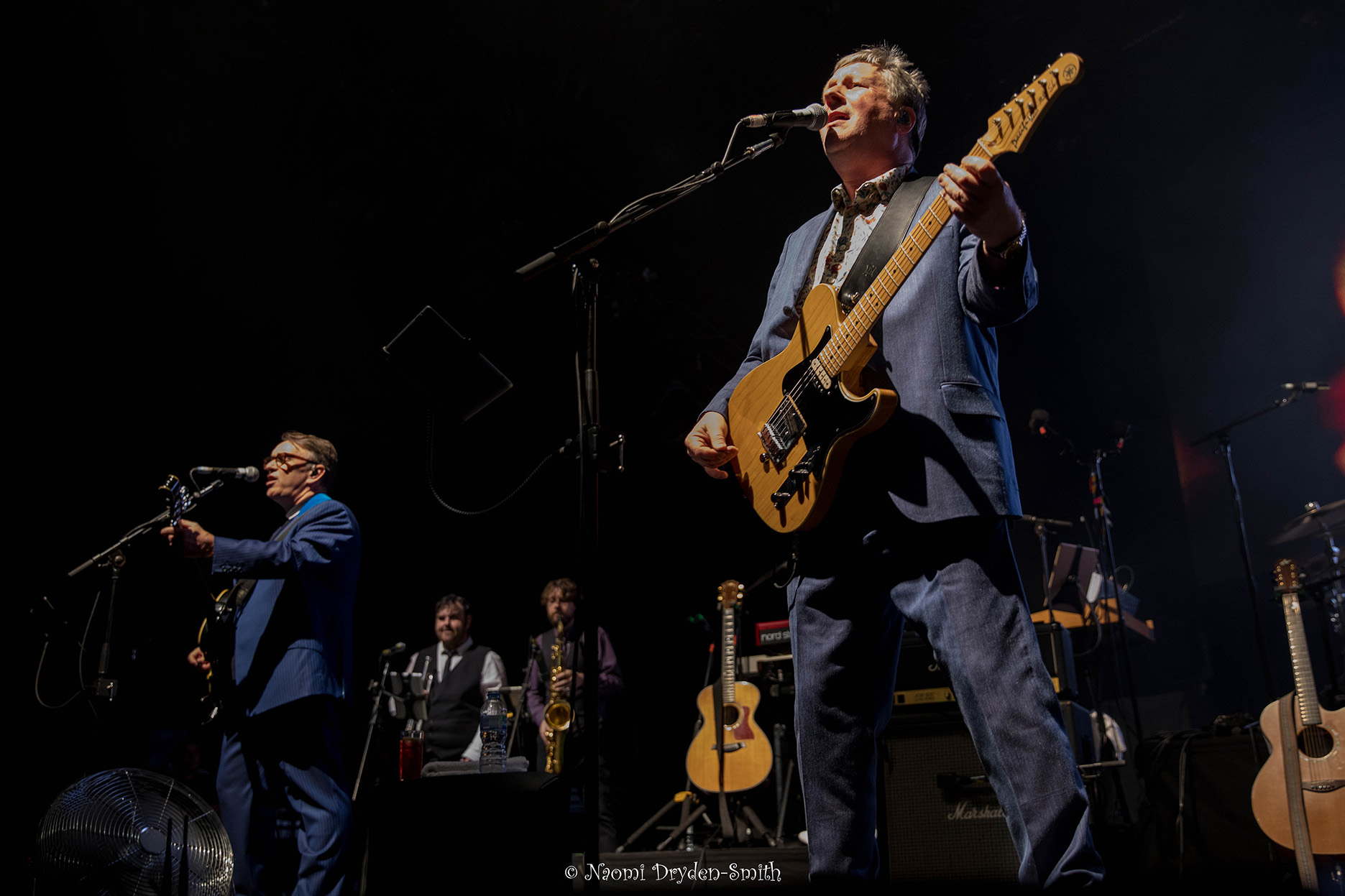 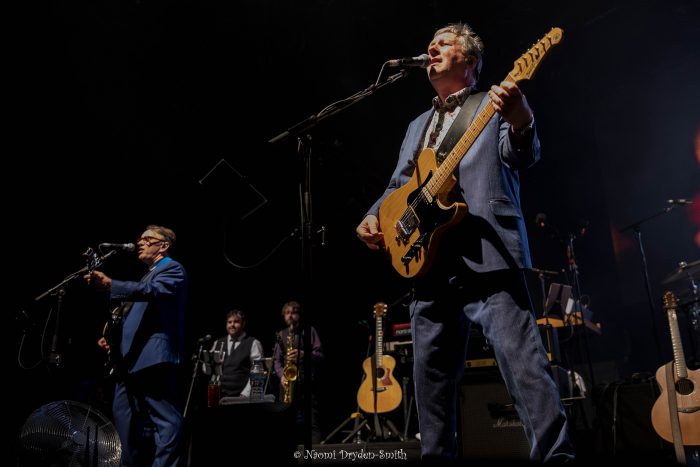 Indigo at the O2, London

Squeeze play a blinder at the first of two London dates on their Join The Dots tour, featuring material from brand new album “The Knowledge” – Naomi Dryden-Smith reports

I was first introduced to Squeeze in the mid 80s when I bunked off school with some friends to go on an illicit pub adventure in someone’s knackered Beetle to the Tickled Trout in Wye, and Take Me I’m Yours came on the stereo. I remember it particularly because of the bouncy suspension – I was genuinely worried we’d break the car. Hearing Goodbye Girl on the way back led to a speedy trip to Our Price to snatch up the Singles album and Cool For Cats, I was that taken with the tunes and the poetry.

Fast-forward to tonight and the O2 is heaving with Mickey Flanagan fans spilling out of the bars waiting to go into the main arena. Contrastingly, Indigo feels calm and dignified – the majority of Squeeze fans here are 50 plus and the opposite of frantic. (Got to say here, this has to be one of the best of the smaller sized London venues, the sound is fantastic.) Nine Below Zero is the perfect choice of support – another South London band prevalent in the late 70s/early 80s, the two bands have worked closely together on recordings and collaborations. Nine Below Zero’s roots are more bluesy, but both bands share a similar gritty Dennis Waterman/The Sweeney atmosphere as The Jam, Elvis Costello and The Who. Lead singer Dennis Greaves even looks like a cross between Waterman and Mike Reid of the 80s, in his mod trench coat. The absolute highlight of their set is their finale 11 Plus 11, as featured on The Young Ones back in the day. 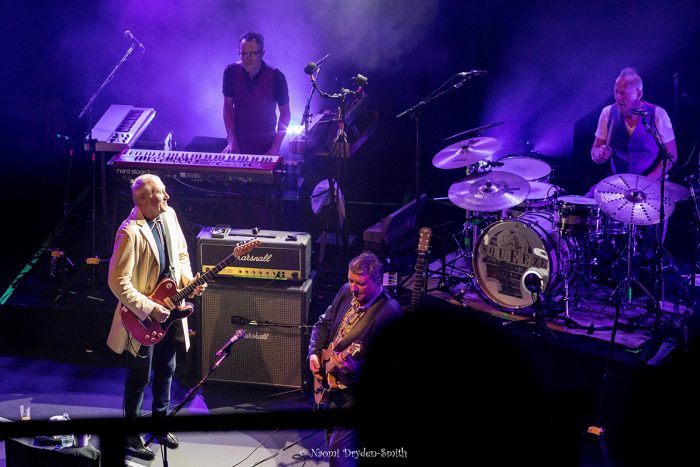 LTW’s Craig Chaligne has recently reviewed Squeeze’s latest album, The Knowledge (). The new material is just as good live, continuing Glenn Tilbrook and Chris Difford’s tradition of making poignant social comment by blending mundane and ordinary sights, sounds and smells with romance and pathos, framed in catchy tunes and brilliant poetry. It’s the same quintessential stark and honest Britishness as captured by Victoria Wood’s writing, Alan Bennett’s plays and Martin Parr’s photographs – almost every song is a proud, grimy, rainy day, tea-cosy look through a window at every day working-class life, especially in the 50s-70s era – at “sunlight on the lino”: from the nostalgia of the folky Patchouli and the sadder, dreamy Departure Lounge, the political comment of A&E, and Albatross which they dedicate to vinyl collectors, through to erectile dysfunction in Please Be Upstanding.

It’s easy to see their storytelling influence on bands like Pulp and Arctic Monkeys, whilst equally clear is the steer they were given by the Beatles and the Kinks. The film projected during 2015’s Nirvana brings their observation pop into a more current arena, featuring Tilbrook and Difford as an elderly couple in an empty marriage, Difford in a platinum wig and Tilbrook looking the spit of Alan Bennett, not speaking but communicating on their iPads. It’s very much in line with the tragedy of Labelled With Love, which literally brings a lump to the throat. Similarly, Is That Love features a film of a busker dancing (and being ignored) in a typical English high street, with Vision Express, Boots and EE shops as backdrop.

The entire show is unarguably great. Tilbrook tells us “Needless to say, it’s good to be back in South London”. The new songs are enthusiastically received and deserve many more listens. Tilbrook presides, his voice as accurate and distinctive as ever, his guitar playing outstanding, particularly his solo on Cool For Cats whilst Difford in his Fred Perry shirt brings a touch of Elvis Costello to the vocal. Cradle to the Grave has been jazzed up, with every single band member singing – the camaraderie is clear and contagious. Take Me I’m Yours has a touch of Gogol Bordello gypsy-punk to it, the whole band out front with an accordion and drum. Tempted sees ladies in the balcony, so far constrained by their seats, rushing down to the front to do some proper dancing. Greaves is back on stage for a rowdy Slap And Tickle, and the night ends with Take Me I’m Yours and Black Coffee In Bed. Tilbrook says “We feel so lucky and blessed to be here”, and the feeling is mutual. Quite literally bought the t-shirt. 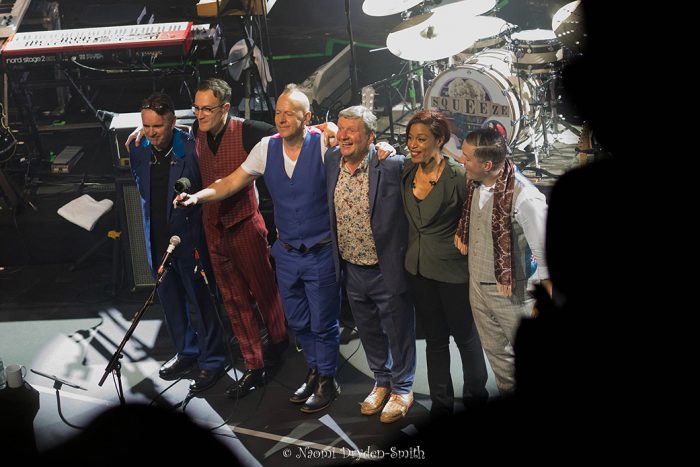 Leaving the O2, the place is again heaving – the Mickey Flanagans in one direction, and in the other a swathe of people arriving for fancy dress parties – a very early and particularly gruesome Hallowe’en party, and the other something apparently requiring Liederhosen. Just another Saturday night in London, no-one bats an eyelid. There’s almost a Squeeze lyric in there somewhere.

Nile Marr : interview about his new EP and a musician’s life

Nile Marr : interview about his new EP and a musician’s...