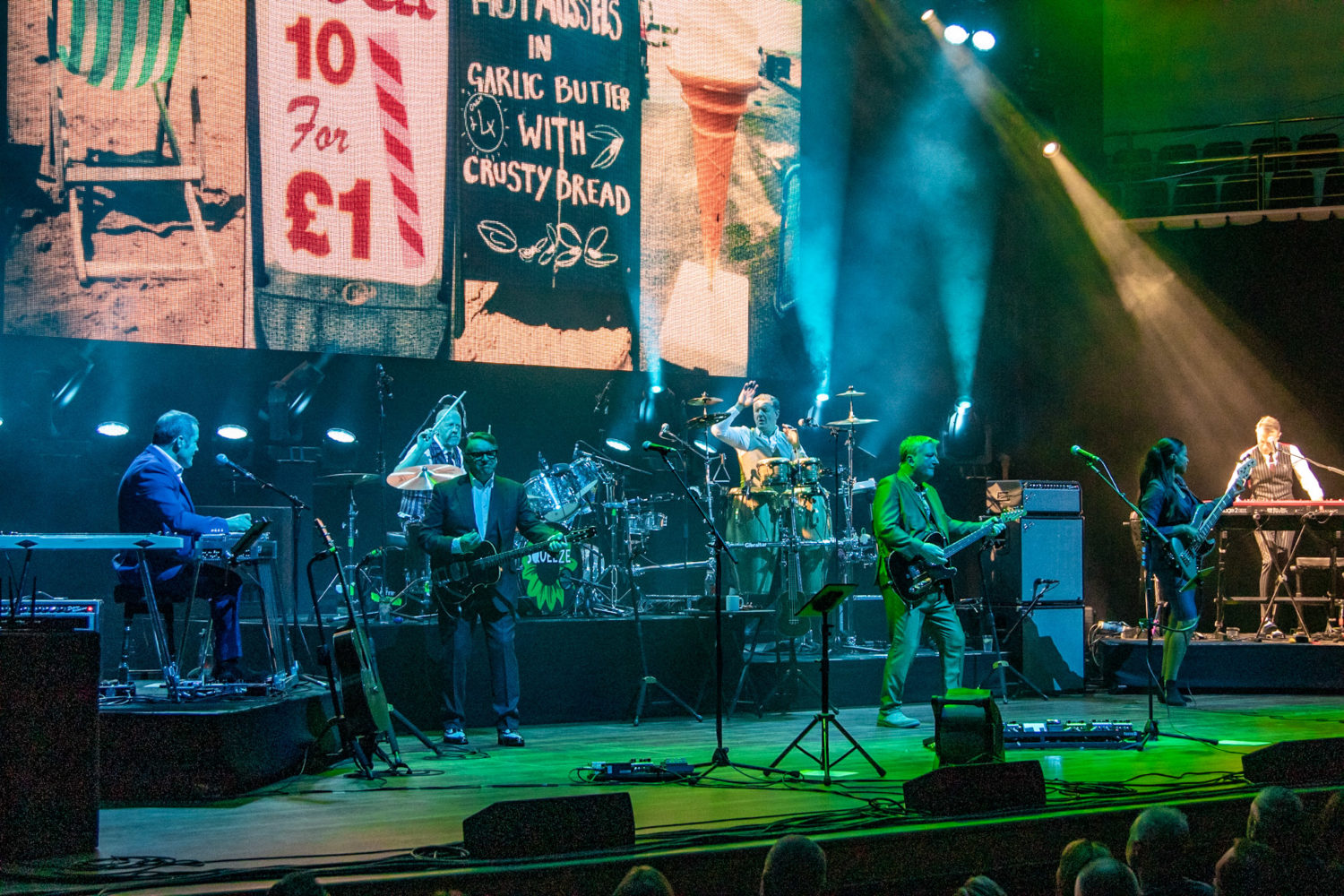 With a double bill of Heaven 17 and headliners Squeeze playing Nottingham’s Royal Concert Hall, Squeeze celebrating the 45 year Difford and Tilbrook collaboration, the venue is about to be shaken to its foundations from two of the 80’s music scene prime movers. Matt Mead reviews for Louder Than War.

Heaven 17 glide on stage to perform their own brand of sturdy electric pop. Lead singer Glenn Gregory with that distinctive Cheshire cat grin, slightly less hair than in his 80’s prime delivers a vocal with grace and passion to the masses in attendance. With two backing vocalist, plus two keyboardists including ex Human League Martyn Ware, in full glitter suit jacket, the stage was set for the show to begin.

Their set is distinctly made up of mostly old material, the band doing their best to get the crowd up and on their feet, Gregory noting the movers and groovers on the upper balconies for rocking the lofty levels of the venue. Fascist Groove Thing, Come Live With Me are welcomed with cheerful glee. Slightly surprisingly a reworked cover of The Righteous Brothers You’ve Lost That Loving Feeling also features, Gregory and Ware stroking each other’s bald heads for effect. Temptation is the curtain closer, finally, the whole crowd arise helping Gregory deliver the well-known vocal, he exclaims Nottingham was the best crowd they’ve played to on the tour so far. Fair play. 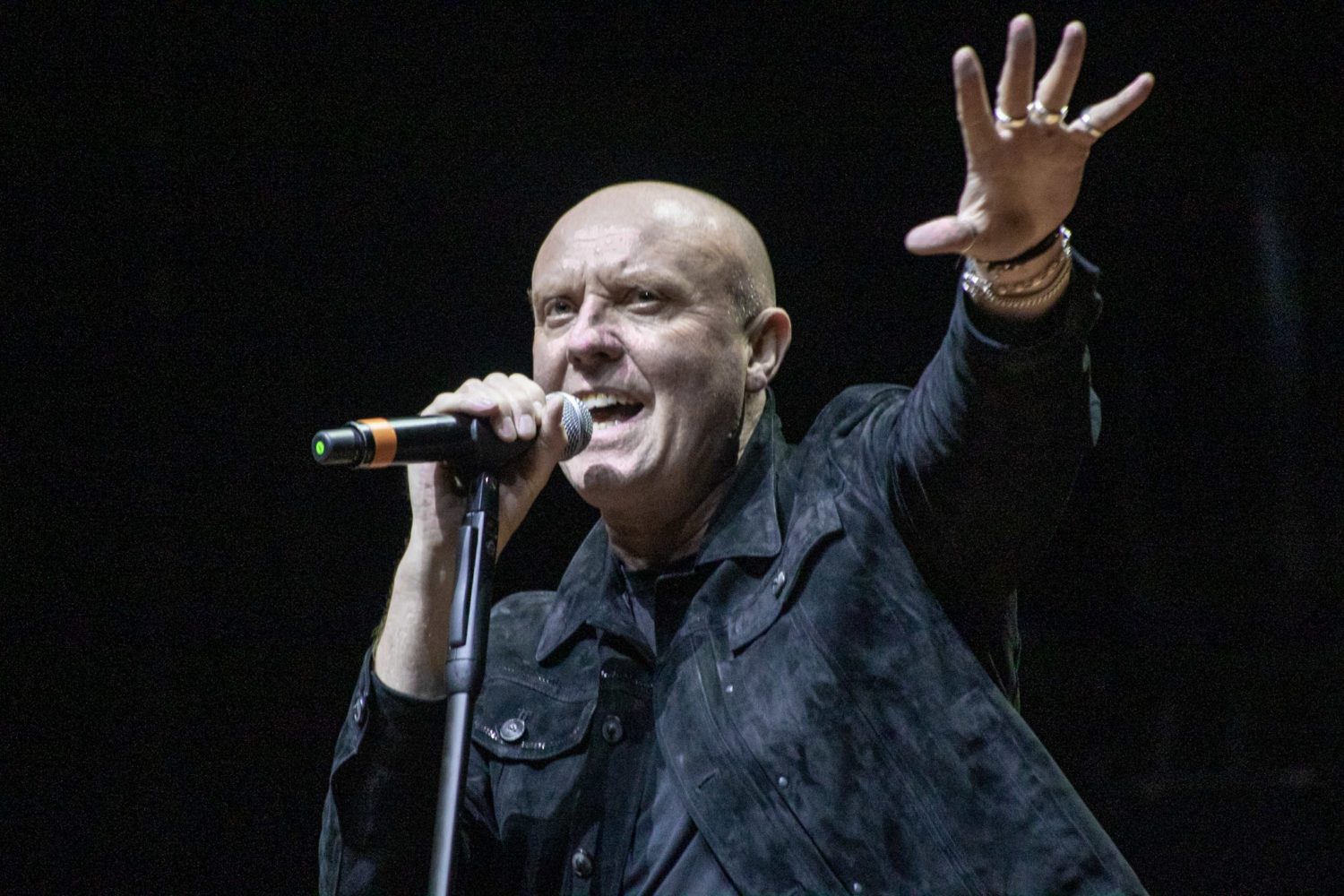 Chris Difford and Glenn Tilbrook come across as your everyday sort of people on the street, the sort that you can relate to, not entertainers so full of themselves that they daren’t look down on the crowd, far from it, you get the feeling if they could they’d be a part of the crowd enjoying the comradery of the audience and spectacle on show, which is part of their universal appeal.

Each member of the band runs onto the stage as the video wall at the back of the stage introduces each member via an ice cream van. This version of Squeeze features ex Paul Weller bassist Yolanda Charles, the wild former Death In Vegas drummer Simon Hanson, Stephen Large on keys with drainpipe trousers, percussionist Steve Smith and multi guitarist Melvin Duffy, The band are a match for any outfit on the current circuit

Footprints kicks things off with the band setting a frenetic pace, Hourglass keeps up the marathon with the breathless quick-fire chorus before Pulling Muscles (from the Shell) tones down the acceleration making sure everyone can take a breather. Up The Junction, Mumbo Jumbo and Please Be Upstanding are received with massive cheers, the old and new material mixing well with each other.

In Quintessence slows things right down with all the band leaving the stage bar Difford and Tilbrook who take to some busking on stage. Hearing them both in this sparse setting is grace personified, each filling the cavernous venue with their lungs and chords echoing into each corner with emotion and originality seeping from the tips of their fingers to the edge of their tongues. Labelled With Love is wonderfully laid out, the acoustic duo go slap bang into a full band shebang which wakes everyone up for the finale.

There’s an acapella version of Tempted by the Fruit of Another, sending images of the band’s old photos shooting across the video screen with original Squeeze members Jools Holland and Gilson Lavis making their own appearances. There’s the obligatory Cool For Cats, Difford informing the throngs that the well-known single was in the charts this time 40 years ago, the song has aged well with a silky full head of hair, purring for more milk as the band slink into Goodbye Girl. The encore features the final frenetic song of the evening Black Coffee In Bed taking the band into the stratosphere with each member getting further aplomb from Tilbrook before the curtain comes down on a wonderful performance.

No doubt in the 45 years since these men first took to the stage as Squeeze they have refined and toned out their performance to entertaining effect. The on-stage almost northern soul shuffling’s of Difford might not have changed, the remarkably outstanding vocal talents of Gilford haven’t changed one bit and their songwriting talents never fail to keep their fans entertained until the cows come home.

Nigel King can be found via his own website.