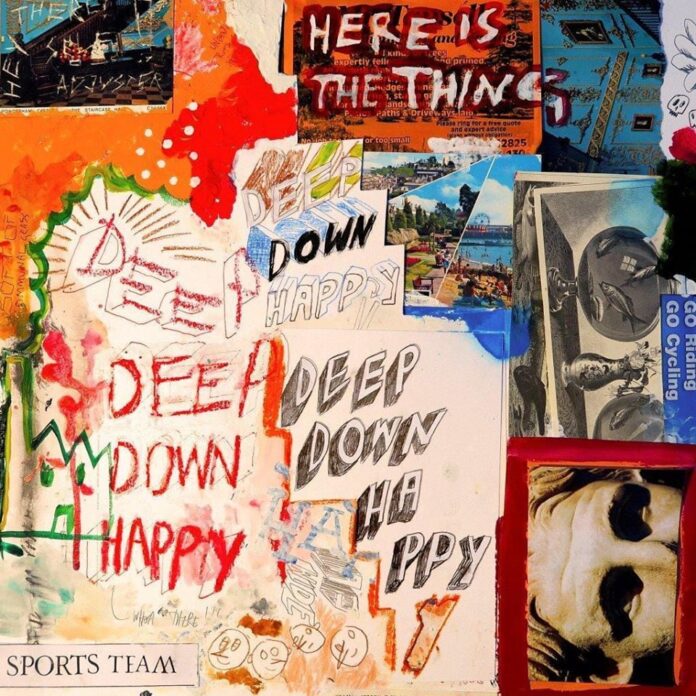 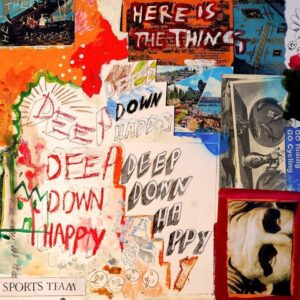 Sports Team have been one of the busiest bands on the live circuit recently and have just released their debut album during a period of our lives when no one is going out. Keith Goldhanger reviews Deep Down Happy.

For those of us who have recently realised that bits of our soul are still glued to the floor inside London’s Shacklewell Arms, Old Blue Last, Sebright Arms or Moth Club (We’re not listing them all) the rise of this six piece band has been a journey that we imagine many other bands in existence this decade can (and often will) only dream of.

Having met at Cambridge University the band members eventually agreed to decamp to London and not only live together but spend most of their leisure time playing music together, writing songs and turning up anywhere that would let them play.

We first met them in January 2018 as they departed a busy Shacklewell Arms stage where conversation actually began with us asking them what their band was called. Within three minutes we were invited to their house in Harlesden (we declined) but caught up with them a few days later at The Old Blue Last which is when it became apparent there was a lot to take in here and cherish. Not just the raucous and mischievous sight of front man Alex Rice taking charge of the room and taking about ten seconds to become the centre of attention but also the glorious sight of a man we were already describing as the coolest man in rock music that day (and still today) Ben Mack, the Ron Mael (or the ‘Anti-Bez’ as someone else said) of UK Indie music. Alex is the kind front man you just know couldn’t really be anything other than a front man of a band, the kind of man that engages any crowd in front of him before, during and after each live show. As great as Alburn or Cocker, with lyrics that are crammed so tightly into each song you find yourself going back five minutes later to remind yourselves what he’s said again. Here’s an album that actually complements the live shows we’ve seen so far whilst many other bands tackle these things the other way around.

And a pretty great album too.

Fast forward a couple of years from that first introduction and the band just got better and better with every release. With their own distinctive sound Sports Team are telling us stories that might take a while to digest in one go and as these were released to the public the gigs (in London at least) got bigger and bigger and their time spent in tour vans became longer.

Selling out the 1100 capacity Scala, (and being bollocked by security whist climbing onto a PA speaker) followed by The Electric Ballroom, Kentish Town Forum, mainland Europe and America everything seemed rosy for the band and then the next thing you know…..the world as we know it comes to a grinding halt and during the longest period of closing time we’ve ever known (when an album launch party may have been the greatest knees up ever) we have to make do with trawling through Twitter on its week of release wondering if Lady Gaga would eventually pip these people to the number one album position (she does).

Sports Team seem have released their greatest hits album as a debut until you realise the omissions of Beverley Rose, Margate, Get Along and M25 to mention four great songs they have previously released. These tracks not on the album will also be an absolute treat for those looking for more music by the band once this debut long player has been digested.

Lander starts off like a stolen car crashing into a brick wall before the foot goes down through the floor at high speed and out onto the motorway. It’s an opener that begins with the voice of songwriter/guitarist Rob Knaggs. The pace remains constant and exciting, the tunes are all compelling and all potential singles. Guitars sweep in and glide away discreetly and at times you can almost hear late 80’s US hardcore seeping out of these verses joined together by melodic choruses that smell of English University Indy disco dance floors that have been the backing tracks of many happy hours of supping and spilling cheap lager over the past few decades.

This is the sound of six people all living together, writing, rehearsing and touring together. Never going home because home is where the tour van is or where the amps are plugged in, all ready for them to go through their magnificent songs over and over again ready for the night they invite all their mates and their mates mates into a room to let go and add to youthful memories that nothing but a long period indoors without being able to go out could take away (it won’t). Sports Team are a band with still more ambition and intentions to keep climbing that mountain and so far, succeeding to climb higher. We live in times when we do still believe these days will return and we can find ourselves four deep at the bar again and once that does happen then Sports Team and their many friends and fans will have an awful lot of catching up to do

This is an album that’s as exciting as The Strokes debut album ‘Is this it’  and full of songs as special as those on Sparks ‘Kimono My House’- its full of English sarcasm, wit and indie dance floor anthems, its allows the listener to be part of this adventure the band are currently on and it’s an album those of us who have shared venue space with already will cherish and remember for decades. 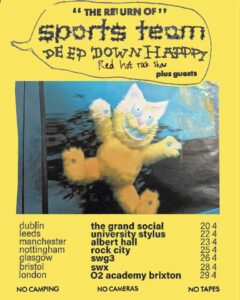