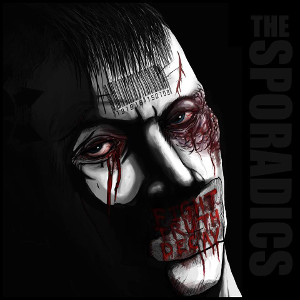 Louder Than War’s Nathan Brown took an invitation to jump on The Sporadics’ bus down to crusty festival ska-punk town.

For the sake of openness I have to declare an interest up front: I’ve played gigs alongside The Sporadics, DJ’d with them, and they played their first gig through my PA and bass rig.  I’ve known most of them for a fair old time.  So this presents me with a problem: a good review looks like nepotism whereas anything else will cause some awkwardness next time I bump into them.  Either way I would feel dirty so, reader, you will just have to trust me on this one, no punches pulled but also no false praise!

The Sporadics (or “Sparrow Dicks” as the landlord of one pub amusingly mis-spelled it on the chalkboard outside!) have been around for about five years and worked hard to carve themselves out a space on the crusty festival circuit, their music falling into that ska-punk-dub category beloved of punk rockers, the last remaining travellers and the megastoned hippies, maaaan, alike.

A key characteristic of The Sporadics’ sound is the guitar, which borrows heavily from that of Inner Terrestrials axe man, Jay.  The combination of bare finger skanky upstrokes counter balanced by heavy riffing does sound familiar but with a few rocking lead licks and riffs Andy – one sickeningly talented instrumentalist – makes it his own.  Still, if you’re gonna be compared to anyone, make it the best, eh?  He is backed up by loping basslines from Dave “Bimble” and drummer Pete completes the rhythm, providing a canvas on which singer Shaun can paint his observations.

There is a fine history of borrowing, pastiche, paying homage, parody and outright plagiarism through original Jamaican ska and reggae culture and, less well documented, in the world of punk rock too (I offer thee the Clashified ending of SLF’s “Crap on the Radio” as an example) so take it as observation, not judgement, that I notice similarities between The Sporadics and others in the ska-punk genre – it’s part of the art form, innit?  It’s there in the delivery of the line “There’s a war in Northern Ireland”, instantly recognisable to fans of The AK47s, in a couple of tunes that owe much to AOS3 and Culture Shock, maybe a bit of Back To The Planet in the basslines, and particularly noticeable in the poem at the close of the CD which is delivered in the same rhythmic style of poetry used by RDF front man Chris Bowsher.

Whilst they are up for a good time, The Sporadics are more than just hedonistic festival dance music.  They have a serious message, in the spirit of anarcho-punk that educated them, but delivered to a bouncy beat.  The implication of the CD title is that if toothpaste fights tooth decay, The Sporadics Fight Truth Decay. They sing about the state of the economy for those at the bottom (Debt Crisis, Tear Down The Law, Broken Britain), the apathy of the British public – and I would say their complicity in their own predicament (Itchy Dub, VAT) and Orwell’s 1984 fiction prediction turned reality, constant war (Conflict).  It doesn’t take a great amount of analysis to realise that most of these are a product of, or function of, capitalism.

The Sporadics’ overall message is perhaps best demonstrated in standout track Here is the Schnews “If you’re not pissed off….you’re not paying attention”. Taking its name from the long running Brighton free activist newsheet which called it a day last year, this song also serves as a reminder that there is still hope! It ain’t all doom and gloom though – in lighter moments they celebrate festivals, deploy comedy vocals to represent the views of the establishment (think Terry Jones of Monty Python) and take the piss out of the “Used to be a punk” brigade with the great punchline: “You ain’t no punk, you never were”.

The band bunkered down with Matt and Steve of Made of Ale mobile studio to create this offering and it is also released on Matt’s Pumpkin Records label.  It’s a great recording with a great bouncy feel to it, but I do have a gripe.  Having seen these fellas many a time, I feel that there are a couple of moments where this recording doesn’t capture singer Westbourne Sean’s full potential – missing the gravel and shout in the delivery that sits alongside the sing.  If you’re new to the band you won’t notice it: one of the perils of your reviewer knowing your product!  I know from experience that capturing the vocals in the studio environment can sometimes be the most difficult part of the process.  There is no crowd to bounce off (Sean is a consumate front man, evidenced by the live clip that opens the CD) and you can’t do your usual jigging around that gives you the energy ‘cos studio engineers and moving microphones are not a good combo. 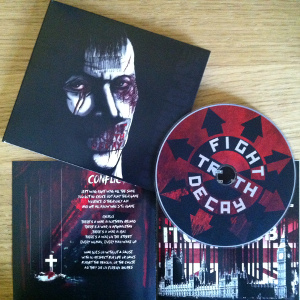 The booklet and CD digipack are set off with some excellent artwork by the band’s collaborator and friend (and all round nice geezer) Neale, each song getting its own dedicated page and image – most of them actual paintings, set off by the centre-piece: a photo from 1988 of a traveller bus emblazoned with the slogan “Fight Truth Decay” which gives the CD its name.

If you haven’t yet got the gist of where this lot are coming from and whether or not they are your cup of tea there’s probably very little I can add, but you could do worse than catch The Sporadics at Dirty Weekend festival in September.  Another project involving Matt from Pumpkin.