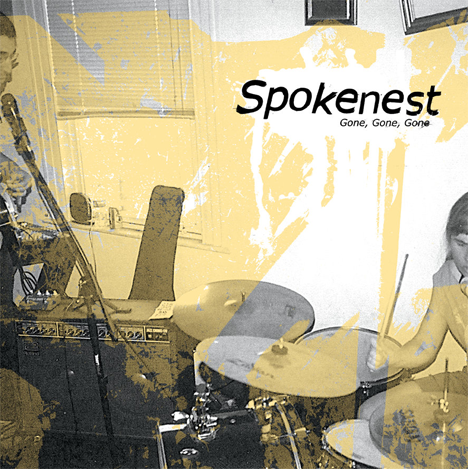 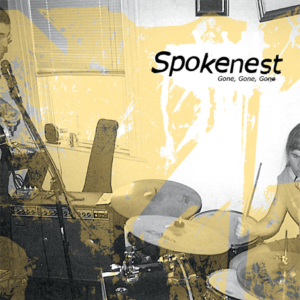 A joyous slop-punk classic drops from LA’s Spokenest and Glenn Airey is here with grateful ears to pick it up.

Spokenest are a guitarist called Daryl (a he) and a drummer called Adrian (a she). They were two-thirds of Los Angeles ‘slop punk’ outfit God Equals Genocide until they got married and decided to make music on their own. Listening to Gone, Gone, Gone, you have to say they’ve done the right thing. On both counts, I’m sure.

The sound is loaded and crunchy, with Adrian’s kick-drum compensating for the absence of a bass guitar so thoroughly that if you play this loudly enough through headphones, as I’m doing right now, it fair makes your heart bounce off your rib cage – as it did mine, just now.

The duo’s hollering, exuberant vocals are shared and swapped to thrilling effect; the drums canter like a thoroughbred, and Daryl’s skittering guitar ricochets around with just enough bottom-end to hold hands with hardcore, but is primarily tense, discordant and wiry like all the best post-punk.

Ten of the twelve song titles consist of a single word, suggesting there may be some kind of Californian syllable drought, and indeed such economy is key to the whole enterprise: no distracting effects, no unnecessary instrumentation – the songs are melodic and energetic enough to get by quite happily as they are. And when those sparring voices collide like a pair of particles down at CERN, the explosions really are something special and joyous. ‘Whisper’ is just one track that will have you bellowing along with the chorus, if you can stand still long enough to catch your breath.

Elsewhere, the lyrics tend to reiterate the enduring punk rock themes of engagement, empowerment and independence: all attributes which are demonstrated time and again on this consistently enjoyable, tune-packed album.

Spokenest rock, in a cool, non-macho way that couldn’t be more at home in a garage if it was a ten-year old Pirelli calendar. Get a little taste of them on Bandcamp, or indeed Drunken Sailor Records, where you might understandably be tempted to grab the physical LP while you’re there (before they’re all gone, gone, gone) especially as it comes on nice swirly black and see-thru vinyl. I promise you’ll still be playing it this time next year and beyond.

As well as the various links above, you can find Spokenest on Facebook here