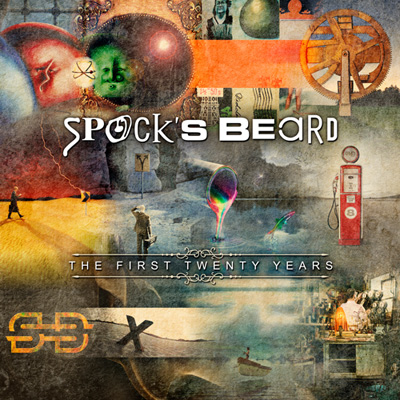 Spock’s Beard: The First Twenty Years (Inside Out)

Indeed it is a  package which gathers together some of the best tracks of their entire career – none of this  relying on the chart success of any latter years while ignoring their fledgling efforts type of thing which the big name bands often come up with. However, the problem remains in deciding what to include which would best represent the band over twenty years, several line up changes and songs which can last from 5 to more than 20 minutes.

Founder member and bassist Dave Meros has said that it’s taken a lot of  back-and-forth between everyone involved, but they managed  come up with a song list which they believe represents each album and era of the band quite well. Not only that, but all the tracks have also been re-mastered by long-term collaborator Rich Mouser, and the DVD portion of the release will include rare footage of the band in the 90’s, featuring vintage live performances from Progfest ’97 as well as the band rehearsing and recording “The Kindness of Strangers” album.

The real USP however is  a brand new, 20-minute (yippee!!)  track titled ‘Falling For Forever’ that features every member of Spock’s Beard past and present, including Neal Morse (who also wrote the track), former drummer/singer Nick D’Virgilio & current vocalist Ted Leonard.

Of the new song, former singer, writer and main man Neal Morse has said: “It was a lot of fun writing for the Spock’s gang including Ted and Nick’s voices… I definitely had them all in my mind… and I think the end result is really, really cool. Al is killing it on guitar, Dave’s bass tone will take the paint off your walls, Ryo is ripping on the keys as usual, and both Jimmy and Nick trade off drum solos toward the end of the song! Ted sings the choruses, Nick sings the middle section, and I sing the verses. It’s truly a team effort. The SB fans are going to love it!”  And if that’s not wetting the pants, it will certainly be whetting the appetite and for some will be worth the price of admission alone.

Disc 1 contains songs from the Neal Morse period of the band before he went in search of his higher calling. While ‘Wind At My Back’ shows clearly the direction in which he was travelling with its inspirational chorus and onward Christian soldiers march rhythm. It’s hard to beat  the wonderfully cinematic opening of ‘At The End Of The Day’, arguably as good a song as they have done (although some might argue that the ending of ‘The Great Nothing’ – a twenty odd minute piece from the same ‘V’ album is as good as it gets). ‘June’ also showcases the acoustic songwriting strength that the band had/have and that’s it’s not all about grand overblown gestures.  On disc 2 you’ll get a couple of openers from the slightly less  acclaimed ‘Feel Euphoria’/’Octane’ period countered with a couple of songs of more epic proportions  – ‘Jaws Of Heaven’ and ‘Waiting For Me’ from the last Nick/first Ted eras.  It is indeed a veritable feast of proggy goodness which despite coming hot on the heels of the release of their ‘Oblivion Particle’ album has enough about it for the fans, obsessive or casual, not to dismiss.

Although they are now viewed as influences on younger prog bands, by their own admission, they too are a product of what’s gone before (see the LTW interview here). ‘The First Twenty Years’ simply goes to prove  just how important Spock’s Beard have been to progressive rock since their formation in 1992, and how consistently excellent they remain to this day.

Spock’s Beard can be found  online at :www.spocksbeard.com. They are also on Facebook and tweet as @SpocksB.

Words  by Mike Ainscoe. You can find more of Mike’s writing on Louder Than War at his author’s archive and his website is www.michaelainscoephotography.co.uk