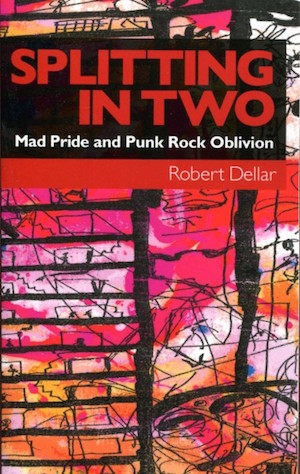 Robert Dellar traces his journey from his childhood in a working class area of Watford, through Sussex University and the London squatting community to the murky waters of mental health.

In this book, the pioneering work of Robert Dellar in his time at Hackney Hospital is of special importance. As well as setting up a patient’s council and advocacy department until the hospital’s closure in the mid 90s, he organised some lively gigs which he describes here in colourful detail. His journey then continues to Southwark MIND (the first user run MIND group) and on to Mad Pride an organisation who, through the gigs they put on, linked mental health with rock and roll. With his friend Peter Shaughnessy they also turned mental health demonstrations into theatre.

The title of this book is also the title of a song by punk legends Alternative TV who make several appearances in the book as do Nikki Sudden and two survivor punk bands, The Ceramic Hobs and Rudimentary Peni. Lesser known but equally talented artists like Dave Russell and the Astronauts also make a number of appearances, as does Ronnie Corbett, who turns out to be a decent chap. While Mad Pride is associated with punk rock, a number of folk musicians and poets also participated in their gigs.

Some parts of this book deal with grim topics and plenty of tragedy is described. But a sense of humour runs through it, and much compassion is shown. A little anarchy is also at play, with the titles of some chapters lifted from punk and new wave songs.

This period was especially important to Robert, who produced many fanzines as well as the Southwark MIND newsletter, which was always an inspiring read. There are some harsh realities in Splitting In Two. Some little known capitalist scandals are exposed such as the exploitations carried out by the drug companies and charities like SANE (Schizophrenia a National Emergency) who, whilst appearing to be respectable, did a lot to demonise people with the illness. Dellar also exposes the realities of life for people living with schizophrenia – a life of heavy medication, stigma and locked wards.

Despite all this, the book is an enjoyable and entertaining read. Robert’s journey has been an uphill struggle and the book highlights both his vulnerabilities and his strengths. But there have been proud achievements along the way, an example being the SANE demonstration which Mad Pride organised in 1999 at which Marjorie Wallace came out to face her public. I have a lot of respect for the good work that Robert Dellar has done over the years.

Extracts from and more information about Splitting In Two: Mad Pride and Punk Rock Oblivion by Robert Dellar can be found here.

All words by Frank Bangay, find his Louder The War archive here.