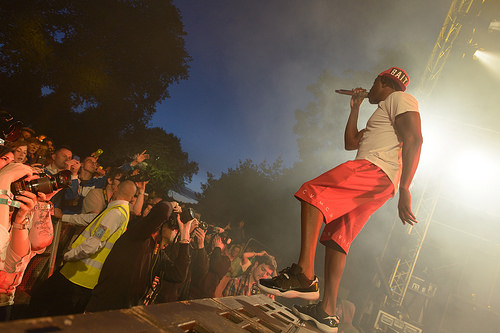 Split Festival may have been away for a year, but with a new venue, beautiful weather and an awesome lineup. Louder Than War’s Lee Hammond is truly blown away by the first day in Mowbray Park.

We arrive in the middle of the afternoon at the beautiful Mowbray Park, set in the centre of Sunderland. It’s not very often that we get to go to a festival set in such lush surroundings nor in the centre of a city, this does has its advantages as we find out later. However, Saturday is blazing, it’s a glorious day for it, if only we could have weather like this at every festival.

We quickly make our way through the festival site, to find the third stage where we find Darlington residents Goy Boy Mcilroy. These guys provide us with a great way to start the day with their hefty blues-rock. The third stage maybe the smallest but the noise of these guys can be heard throughout the site, it feels like they’ve turned everything up to eleven. The band seem in particularly high spirits today, in turn translating this into a scintillating performance.

Split Festival offset the main stage against the second and third stages so there is always something going on. As Goy Boy Mcilroy leave the stage the main stage lights up, Sunderland’s latest export The Lake Poets makes an appearance. Fresh from a tour with the wonderful Smoke Fairies, Martin Longstaff has brought his troop of brilliant musicians. A huge crowd amasses as he breaks into some of his beautiful tracks, including Rain and lead track from his debut EP, Honest Hearts.

There is a particular touching version of City by the Sea, its quite clear that Longstaff loves the city that he is so glad to call home. He seems somewhat overwhelmed by the turn out at today’s set, but it is particularly well deserved. It’ll not be long before he’s headlining festivals like this.

In a complete change of pace we make our first forays in to the dark second stage, we wander down to the front to be greeted by London’s Bleech. A powerhouse of indie rock, these guys are loud yet not overpowering. Brilliantly formed indie rock, they have bags of swagger and attitude but they have the music to back this up. Yet another band with a big future on the horizon, it’s a recurring theme and one we really do like.

Next up though is the North East sensations that are Smoove and Turrell, these guys have travelled the world and are funk and soul legends in the making. Another band overwhelmed by the awesome crowds that are now filling the park. They bring their own brand of funk and soul with tracks like Beggarman and Lay it On Me.

This is just what Split needs to take it up a notch, the suns beating down and everyone’s in high spirits. Now those who were relaxing are up and dancing and clapping along. Whilst they’re not what we would immediately go for, they’re a perfect festival band there’s something for everyone, this is seen throughout the crowd as kids dance with their parents and grandparents.

With the pace firmly picked up we head back over to the second stage to catch Newcastle’s fathers of post punk, Punishment of Luxury. Split has this brilliant knack of attracting not only great up and coming acts but also some phenomenal acts from the past. Previously they’ve had Leatherface, today Punishment of Luxury fill this space albeit rather angrily but what an addition to the lineup.

They open up with Puppet Life and lead singer Brian Bond has a hugely daunting stage presence. Made all that more daunting by his proclamation that they have a MESSAGE, before breaking into The Message. Today almost seems to good to be true with every artist we’re blown away that bit more, at which point we decide to take a break from the constant aural assault and head out into the city.

Feeling refreshed we head back to catch the second half of Simon and Oscar’s set, playing classic Ocean Colour Scene acoustic tracks. We can’t help but lie back on the luscious green grass and soak in the sounds. Huge singalongs ensue for tracks like North Atlantic Drift and set closer The Day We Caught The Train.

We have to rally ourselves though and once again make our way back over to the second stage. Tom Vek isn’t perhaps as exciting as we’d anticipated, his set seems somewhat flat and his stage patter lacks any sense of humour. The few tracks that we catch seem somewhat lacklustre; we can hear the third stage in the distance.

Making a move for the third stage we see that it’s billowing with people from entrance. Inside we discover another local band in the form of Hyde & Beast, with a second album Keep Moving released just over a week ago. Its no wonder the band are floating on air, we make our way into the sweaty mêlée to find the guys blasting through tracks like Keep Moving and You Will Be Lonely. We’re completely blown away, we leave the tent soaked through despite the heat. They’re on fire and we’re still yet to see tonight’s main stage headliner.

However, its not long before the lights go down and Split Festival welcomes Dizzee Rascal. He bursts on to the stage in his own inimitable style, opening up with Here 2 China, before getting in stuck into old favourite Fix Up Look Sharp. We bounce along with the hordes of people, Dizzee is truly a master when it comes to getting a crowd going. Jus’ A Rascal and Sirens follow in quick succession before he turns on the lasers.

He lights up the entire park and the surrounding area as far as the eye can see truly a set to behold. It caps a day which couldn’t have been any better, amazing weather and so many phenomenal acts. This is only day one and we still have so many bands to see and Split Festival has already overly exceeded our expectations.

All words and photos by Lee Hammond. You can check out more work by Lee by visiting his Louder Than War Author’s Archive here.