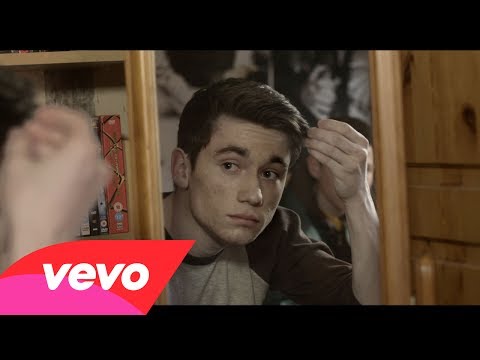 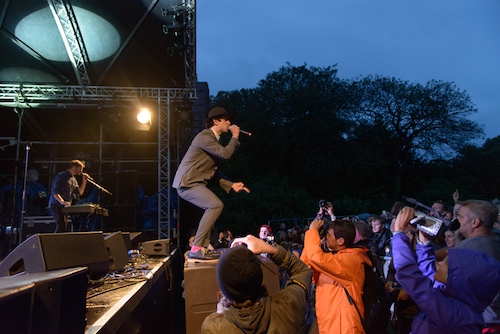 Despite the arrival of an unwelcome act in the form of hurricane Bertha, Split Festival proves that it is a force to be reckoned with. This surely has to be their best year yet, Louder Than War’s Lee Hammond enjoys every second – despite the persistent rain. (See Lee’s review of day one here.)

Could today be any further from yesterday? In all fairness we had anticipated and planned for the arrival of the unexpected on today’s bill – the tail-end of hurricane Bertha. So as the rain poured, the festival was more than prepared for this with ponchos on sale at the gate and some of the more vulnerable areas had been sufficiently covered.

A little bit of rain wasn’t going to dampen our spirits as we soldier on, the only thing which did go some way to dampening our spirits was missing local post rock behemoths Young Liar. As we walked around the outskirts of the park we could hear them all the way and they sounded as fierce as ever and should you ever get the opportunity to see them we thoroughly recommend you do.

Instead though, our first set of the day comes from locals Iceni, these guys have a slightly stranger take on pop music. Genius is exactly that and it helps us forget the rain that seems to be steadily getting heavier. All the while we’re getting our groove on with Iceni, their super powerful vocals are a sight to behold and they close out with a cover of Patty Smith’s hit Gloria which can’t help but go down superbly.

Now Iceni have set us up for the way we take our opportunity to sample some food in the city centre, before heading back in to catch one of the organisers. Barry Hyde of The Futureheads takes to the stage to play songs from his debut solo album, something of a slight departure away from his work with The Futureheads. The stand out track this afternoon though is My Sugar, a heartfelt jaunt about that one person who saps all of your energy.

Next up for us is another Sunderland native, Field Music’s David Brewis brings his solo project School of Language to Mowbray Park. With a new album Old Fears. Before they’ve even taken to the stage the band set up their own kit in their Field Music Productions overalls. Kicking the set off with tracks from debut album Sea From Shore, David continues to play the amazing Dress Up from the new album.

The reaction to tracks from the new album is particularly positive and we’re blown away. The Sunderland party continues though with Sunderland’s number one sons and indie pop darlings Frankie and The Heartstrings. Taking to the main stage Frankie is clad in his ‘Sunderland’ trousers, as he bounces around the stage. They have a plethora of awesome tracks that they regale this huge audience with.

Photograph goes down incredibly well, but there is an obvious highlight for this home crowd and that’s the ever-brilliant Hunger. They also play tracks from their new album, these go down particularly well all things considered. Despite the driving rain this is a triumphant hometown show for these guys that also own a record shop just along the street from today’s venue.

Next up is one of the acts of the weekend for us, Glasgow boys The Twilight Sad. Announcing as they take to the stage that they will be playing the now classic Fourteen Autumns and Fifteen Winters in full for the last time in the UK. As this hadn’t previously been announced it fills us with excitement, as we’d been unable to see them when they toured this earlier in the year.

Lead singer James is by far and a-long-way the most impassioned lead singer in indie music, he writhes around the stage the passion in his delivery is completely undeniable. Walking For Two Hours is particularly powerful and such an awesome track, the band keeps us pinned to the barrier at the front of the tent throughout their set. Mesmerised by the band and in complete awe, they cement themselves at the top of our list for the best set of the weekend.

We leave the tent completely blown away, unfortunately the next act on the main stage don’t fill us with such adoration. The rain is driving now and The Cribs have taken to the main stage. I’ll hold my hands up, I’m not a Cribs fan, but the earlier work is by far their best and they play Hey Scenesters which is a track that soundtracked my university days.

We make our way back to the second stage for the last time, where Super Furry Animals legend Gruff Rhys is about to take to the stage. This evening Gruff is presenting his new album American Interior, the story of a man named John Evans. Kicking off with lead track American Interior, Gruff charts John Evans’ journey across America with the aid of projector.

You’d be forgiven for thinking you were at a comedy show this evening; each track has a hilarious story to match. Walk Into the Wilderness is a favourite for us tonight, Gruff is a brilliant storyteller and we can’t help but praise his amazing stagecraft. His lyrics both heartfelt and deep, yet they retain an element of humour at times, so, despite the poor weather, our spirits have never dropped.

Leaving the second stage for the final time we see the main stage lighting up and the rain seems to have held off, if only for a short while, as local superstars Maximo Park take to the stage. Opening with the first track off the latest album Give Get Take, the whole crowd are up and bouncing and we’re right alongside them. We’re right down the front as front man Paul Smith shakes and shimmies around the stage goading the crowd whipping them up into frenzy.

The band tear through tracks like The National Health from the album of the same name, the passion of Maximo Park is never in doubt. So forceful and so brilliant in the same breathe. Leave This Island from Too Much Information is undoubtedly the highlight off of the bands new album. However, it’s the older tracks, which still garner the biggest crowd reaction.

Graffiti and Going Missing are obvious hits with the crowd, but a Maximo Park set wouldn’t be a Maximo Park set without Apply Some Pressure. The crowd becomes a mess of bodies flinging themselves around as the band power on through this triumphant set. They close out on one of their classic tracks, Girls Who Play Guitars, topping off a phenomenal set to end the weekend.

We must congratulate Split Festival, they came back after a fallow year with a bigger stronger and better lineup than ever before. We cannot praise them enough, despite the weather doing its best to ruin the second day, we didn’t see one person who wasn’t having a great time. Thank you so much for such a pleasant festival experience unlike most others.

All words and photos by Lee Hammond. You can check out more work by Lee by visiting his Louder Than War author’s archive here.