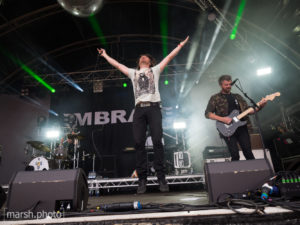 Nottingham. Home to Robin Hood, Nottingham Castle, Nottingham Forest, Notts County, The Panthers, the River Trent, Shane Meadows, Sue Pollard, Alvin Lee, Torvill and Dean, Jake Bugg, Little Barrie, Sleaford Mods and, of course, Batman’s residence, Wollaton Hall. It was the latter that the 10th anniversary of The Splendour Festival was held at for the 10th successive year. With acts such as Madness, Pet Shop Boys, The Specials and James having all played the festival in previous years, this year was no different in pulling in the stellar acts such as The Charlatans, The Stranglers and main stage headliner Paloma Faith. Matt Mead attended the festival to check out the birthday celebrations. All pics by Chris Marsh.

The Splendour festival is the biggest summer music festival in the Midlands. As previously mentioned, the big names have been the main draw for fans, and as I arrived on the site the organisation and the family friendly felicities on site were of the highest order. Fairground rides, Little Splendours area for those young rockets, fringe entertainment and a comedy stage all made for a great day out in the caped crusaders back garden. 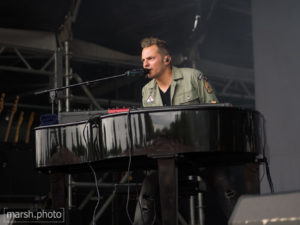 Toploader were the first band of the day for me on the Confetti Stage, taking my mind back to their days of being one of the darlings of Chris Evans on TFI Friday. They make a decent racket, slimmed down to a 3 piece now, but none the less pack an exciting noise, playing crowd favourites Dancing in the Moonlight and Achilles Heel. Singer Joseph Washbourn, although long gone are the Roger Daltrey curly locks, still holds a note well enough to sound like the indie kids’ Steve Winwood. 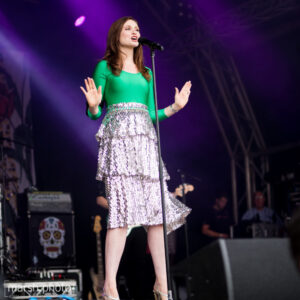 Over on the main stage Sophie Ellis Bexter showed her best Saturday Night Fever disco moves. Dressed in bright green leotard and silver glittery skirt, a real crowd favourite with everyone up and dancing for her well known hits, Murder on the Dancefloor and cover of Modjo Lady. I was slightly disappointed we didn’t see a guest appearance from her Mum, former Blue Peter presenter Janet Ellis. Oh well, the hunt goes on for that Blue Peter badge.

Next up on the Main Stage and for me the Main Stage crowd pleasers of the day, the lovable Bjorn Again. You know the drill, 4 ABBA look-alikes dressed in ABBA 70’s gear drilling all the ABBA hits on point. With the forthcoming ABBA film Mamma Mia! Here We Go Again fresh in everyone’s minds you can only guess the reaction they got. Small children, hooded teenagers to your 40 + years were all up and at it to Bjorn Again. The main field was a sea of arms in the air, can-can dancing and Dad dancing. If the real ABBA do decide to Wollaton Hall I fear an epidemic of epic Dad dancing would grip the county of Nottinghamshire. There, you have been warned! 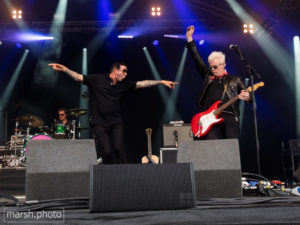 80’s soul diva Marc Almond took to the stage following Bjorn Again. How can you follow such a crowd pleaser as Bjorn Again? By whacking out 80’s belters like Somethings Gotta Hold of My Heart and Tainted Love, that’s how. The crowd might not have embraced all of Marc’s songs as much as the Swedish 4 some, but Marc defo beat them 2-0 on shear solo energy alone. Backed by a full band, plus a guitarist that was the spitting image of Billy Duffy of The Cult, and 3 backing singers, Marc showed his vocal energy in impressive fashion, leaving no prisoners in his path.

Back over to the Confetti Stage indie darlings Embrace entered the ring to go ten rounds of anthemic indie raspers. Lead singer Danny McNamara entering the stage like a returning boxer holding his belt, arms in the air, urging the crowd for a reaction which they duly gave repeatedly as they hit the knockout blows with fan fave All You Good Good People. 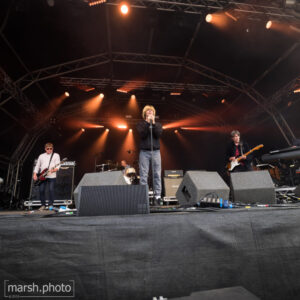 Having played the Splendour festival previously and after hot footing it back to the UK from Spain from playing Benichissum festival, The Charlatans graced the main stage with their familiar Hammond organ tones. Leading singer Tim Burgess wearing a Ross, Racheal, Phoebe etc.. Friends sweatshirt. Is there a message there? Who knows, who cares when The Charlatans are around playing legendary anthems from their vast back catalogue. I last saw The Charlatans back in 1994 at the now deceased Phoenix Festival. Have the band lost any of their brilliance and energy. Nope. Still reaching the stars, which might be a fitting tribute to their former keyboard player Rob Collins, who lost his life in a motorcar accident 22 years over this past weekend. The band indeed did Rob’s great legacy justice holding no prisoners with Just When You’re Thinking Things Over, Come Home Baby and Sproston Green emphatically greeted by the vast crowd now building for the headline acts of the weekend. 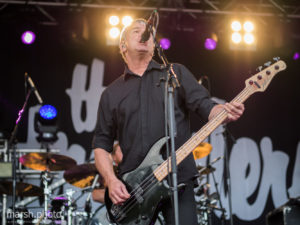 Back over on the Confetti Stage headliners The Stranglers confronted their baying crowd of delirious fans with the new wave/punk anthems they have played around the world and back since the late 70’s. Throughout the day there was a noticeable bevy of middle aged fans in Stranglers t-shirts, therefore upon The Stranglers entering the stage the aforementioned fans lit the touch paper. Centre stage there was a mosh pit of sorts, including 60 year old crowd surfers, known to the band, which gave everyone a good laugh. Founding member Jean-Jacques ‘JJ’ Burnel is one of the best players out there. Playing like a man possessed, looking for any victim that dares not move to this dense and pounding rubbery bass lines, he plays like the best out there, aka John Entwhistle, Bruce Foxton, fingers all over the bass, playing every bass line possible. Peaches, Golden Brown and Nice ‘n’ Sleazy delighted the crowd, even if some of the biggest applause was for those brave crowd surfers. 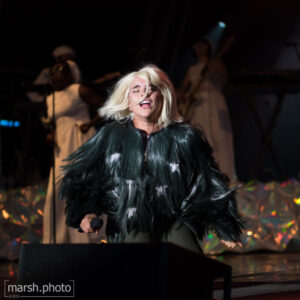 Last act of the day was main stage headliner Paloma Faith. Greeting the young screaming crowd with a stage covered in tinsel, her stage act carries on where the likes of Shirley Bassey, Dame Edna Everage and the aforementioned Sue Pollard have trodden before. Splendour festival’s birthday was shared by Paloma who was serenaded by her band and the audience during her entertaining set. Her band make a decent soul-full noise with the sort of showmanship you might expect from such a mainstream headliner. Kicking off her silver platform shoes to dance, she got the packed crowd up and at it with hits such as Picking Up The Pieces, Changing and Crybaby from her number one album The Architect finishing off her energetic set with a glitter ball filled performance of Only Love Can Hurt Like This.

All in all a thoroughly enjoyable, entertaining and well-oiled machine of a day, plus what a stunning way to celebrate anyone’s birthday. If the festival can change the date of the festival to somewhere in the middle of March I would gladly share my birthday with it in 2019. Cheers Snottingham!

Chris Marsh can be found via his Facebook page.

All word by Matt Mead. You can find further articles by Matt at the Louder Than War author archive pages.