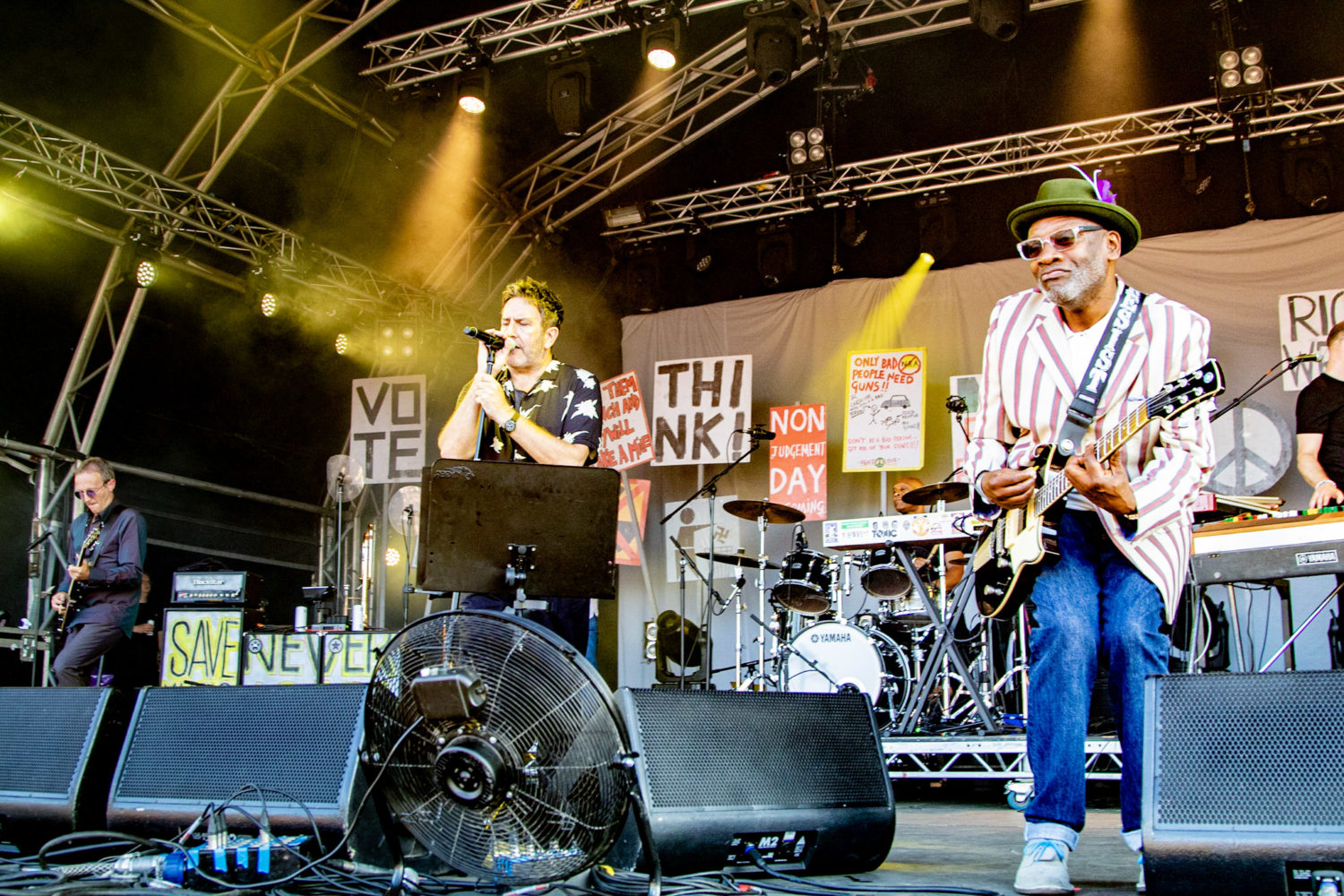 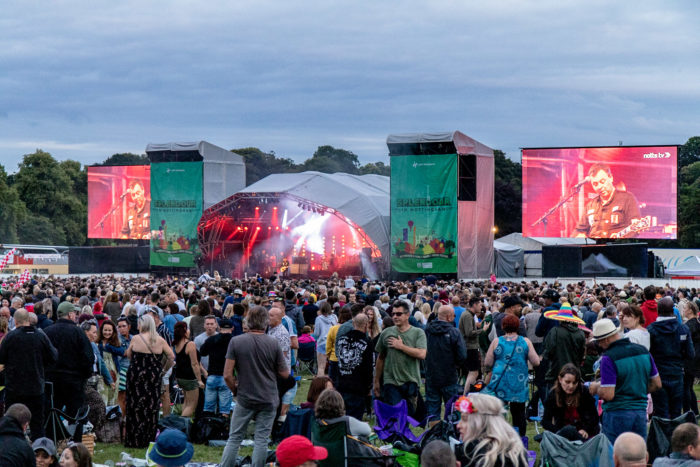 Splendour Festival returned for another year, attracting internationally known acts and local entertainment. Situated amongst the idyllic Wollaton Hall grounds in the heart of Nottingham, Matt Mead soaked up the atmosphere to review for Louder Than War.

After last year’s 10th anniversary celebrations, The Stranglers and The Charlatans being the pick of the performers, this year was to be no different in grandeur with a stream of high profile bands booked. The first in my earshot were The Rifles. With their distinct indie / mod / rock set bursting onto the tea time crowd who leave their ice creams to take a dive into passionate singles Peace and Quiet and Local Boy.

Anyone with a liking for solid guitar pop rock in the same vein as The Undertones with a sprinkling of Iggy Pop would dig well known Northern Ireland rockers Ash. Lead singer Tim Wheeler lights up the stage with a spring in his white trainer steps. Encouraging crowd participation bassist Mark Hamilton and drummer Rick McMurry waste no time with assisting in the carnage. The throngs need little encouragement for some jovial goings on when the likes of Girl From Mars, Shining Light and Burn Baby Burn are blasting into their eardrums. 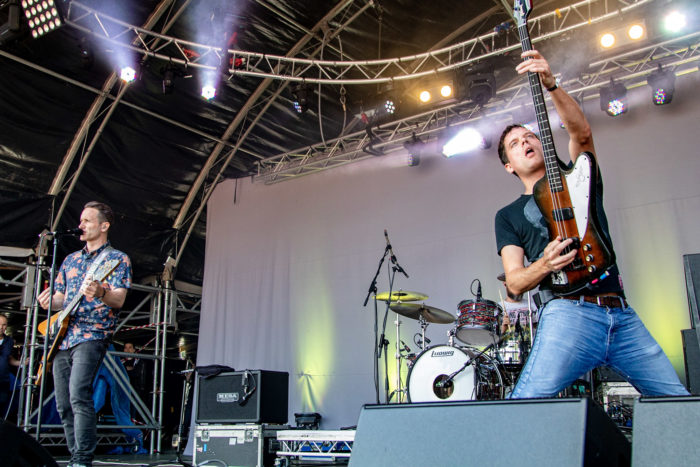 The giant frame of Rag ‘n’ Bone Man is next up on the mainstage. His image is the same as 80s wrestler Giant Haystacks. Thankfully he isn’t about to bounce the living daylights out of his opponent, or maybe that could become a side show in the future. Delivering a heartfelt set that lacks that genuine soul or killer punch of a dynamite soul singer, surprisingly he attracts one of the biggest crowds of the weekend, here’s hoping in the years to come he finds his mojo to counteract my words.

Back on the Confetti Stage 80s legend Roland Gift has a holy look about him dressed all in white. He delivers a vocal that’s seen a number of years exercise which has peaked at just the right time. A Spritely smooth set featuring Fine Young Cannibals hits She Drives Me Crazy and Suspicious Minds get the impassioned treatment they deserve mesmerising the punters into some northern soul shuffling.

This is the 2nd time The Specials have visited the festival having headlined in 2015. Their line-up has changed slightly since then with Steve Cradock (Paul Weller/Ocean Colour Scene) on lead guitar and Kenrick Rowe replacing John Bradbury (RIP) on the drum stool joining mainstay original members vocalist Terry Hall, rhythm guitarist/vocals Lynval Golding and bouncing bassist Horace Panter.

The band go straight in for the kill as they tread the floorboards with their distinctive ska / organ / horn section sounds delivering that fatal blow to the throngs. Mixing in with the old tunes is new material from their recent number 1 album Encore. Hall has that steadfast dead pan look throughout the set as expected, even when all hell breaks loose when Too Much Too Young and Gangsters are roared out on the masses. 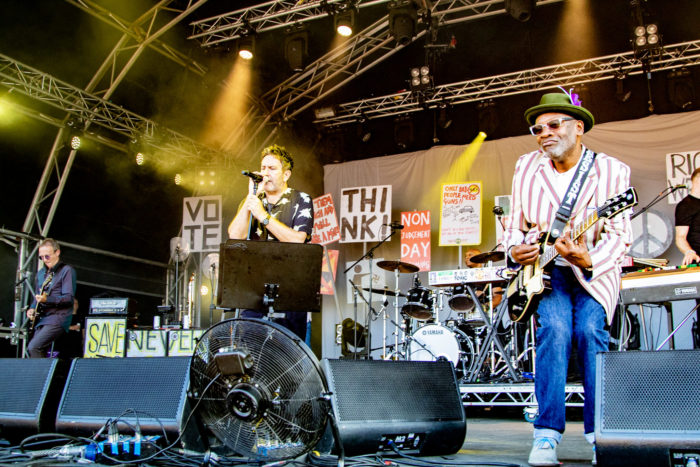 Melanie, Natalie, Nicole and Shaznay otherwise known as power pop quartet All Saints bringing some of their sassy soul in the form of pin point dance routines and those well-known 90s chart breakers to the 2nd stage as it’s headliners. If you’re looking for the indie version of The Spice Girls then walk this way. Ice cool tracks Pure Shores and Never Ever have a welcome place amongst the revellers.

I first saw main stage headliners Manic Street Preachers in February 1991 at a free gig in the small room of the old Nottingham Polytechnic. Around this time they had exploded onto the music scene with their White Riot sounding Motown Junk single whilst wearing tight white jeans plus The Clash like spray painted tops. Their set on that night was bereft of fiery frenetic punk 3 minute guitar bass and drums 1, 2, 3, 4 count in numbers. All 4 members (including Richey Edwards) po-going around like lunatics, the crowd riding high on the speakers at the front of the stage, a truly exhilarating night.

Tonight is a completely different larger setting, with almost 30 years difference the band have aged well. James Dean Bradfield – the Nottingham Forest loving Welshman, is comfortable in his adopted home town, guitar beside his waistline – he’s as iconic as his namesake. Nicky Wire might not be wearing white Dunlop trainers any longer but he is still the diva of the original trio, mixing Paul Simonon low bass playing with Dame Edna Everage eye liner. Sean Moore is as solid as ever behind his kit, pounding out his distinctive beats without fanfare, he is more your Kenny Jones than Keith Moon. 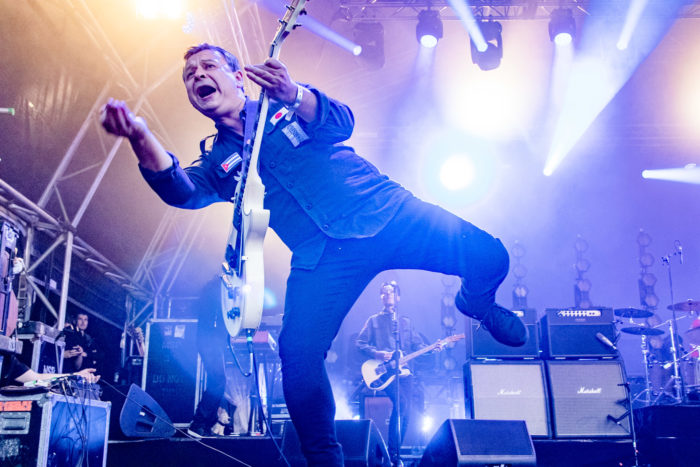 The band stick to what’s best in a setting like this, they play the hits. Motorcycle Emptiness, Australia plus 90s smash A Design For Life drift away into the night sky. There’s a Guns ‘n’ Roses cover thrown in for good measure leaving the midlands folk in no doubt that tonight they have witnessed one of the best Welsh wonders of the modern era, wall to wall hits light the touch paper with the 1000s in attendance.

And with that the festival has yet again treated the multitudes to some fabulous bands with a good concoction of pop, rock and ska. Let’s be hoping 2020 can serve up another delicious plate of high ranking leisure pleasers.