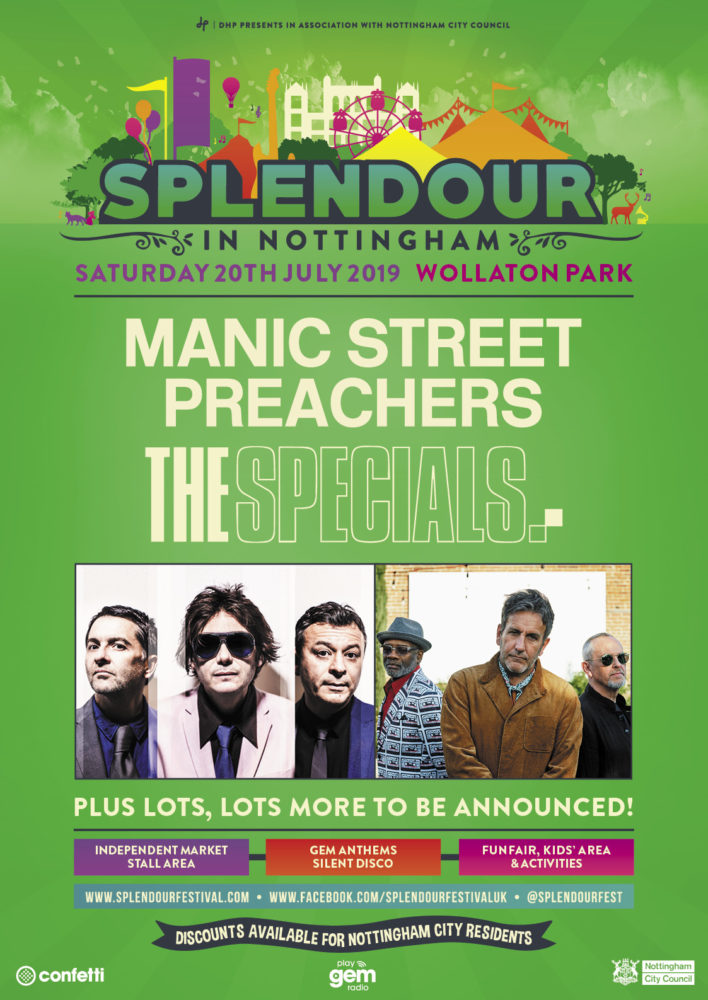 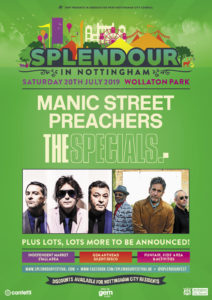 Manic Street Preachers and The Specials have been revealed as Splendour headliners. The annual festival held at Wollaton Park, Nottingham, the home of Batman, this year takes place on Saturday 20th July 2019.

‘Manic Street Preachers and The Specials will headline this year’s Splendour, Saturday 20 July 2019. The two bands have an outstanding back catalogue with more than 20 combined UK top 10 hits, including If You Tolerate This Your Children Will Be Next and The Masses Against The Classes from Manic Street Preachers and Too Much Too Young and the legendary Ghost Town from The Specials.’

Manic Street Preachers were in high demand by Splendour fans, bagging the top spot of who they’d like to see at the festival in a survey conducted by the organisers, DHP Family. The band consists of cousins James Dean Bradfield on lead vocals and lead guitar, Sean Moore on drums and Nicky Wire on bass.

Throughout the band’s illustrious career they headlined several festivals including Reading and Leeds, Glastonbury, T in the Park, and V Festival and gained a host of music accolades including 11 NME Awards, eight Q Awards and four BRIT Awards. As well as their Triple Platinum album This Is My Truth Tell Me Yours, the band have had 13 UK top 10 albums, including Everything Must Go and their latest album Resistance Is Futile. This will be the band’s first Nottingham appearance since their 2007 Rock City show.

The Specials are one of the most electrifying, influential and important bands of all time and return to Splendour hot on the heels of a special 40th anniversary tour celebrating their formation and the two-tone label. Formed in Coventry in 1977, the trend-starting ska revival band hit the British music scene hard. In the UK their debut single Gangsters shot to number six and every subsequent single was a top 10 hit, including two number one hits – Too Much Too Young and the much loved Ghost Town, which won Single of the Year 1981 in NME, Melody Maker and Sounds.

Manic Street Preachers and The Specials are the first of over 40 acts announced to perform at Nottinghamshire’s biggest outdoor music event at Wollaton Park, with many more artists, comedians and entertainers to be revealed in the coming months.

Councillor Dave Trimble, Portfolio Holder for Leisure and Localities at Nottingham City Council said: “Splendour has been a part of Nottingham’s events calendar for over 10 years now, which is a real testament to its popularity with both locals and visitors alike. This year’s festival promises to be another great day out for all the family and, once again, City residents can enjoy £10 off adult tickets.”

With lots happening all over the park aside from the three music stages, including comedy in the courtyard, a kids’ area and entertainers out and about in the crowd, the festival is a fantastic day out for all the family.

Tickets can be purchased from splendourfestival.com or in person from the Nottingham Tourism Centre. To claim Nottingham City resident discount, a copy of your council tax bill is required.