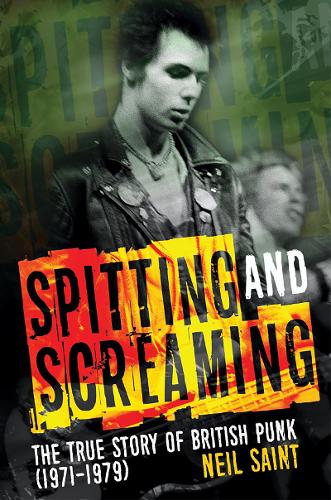 New author Neil Saint – of Retropopic Radio fame – takes a look at some of the many strands that helped shape the punk scene of the ’70s. It’s been done before, by writers like Jon Savage, John Robb and Clinton Heylin among others, but there’s always something new to be found. So did Punk burst out fully formed in the ’76 London heatwave, birthed by the entrepreneurial genius of Malcolm Maclaren, or had the Yanks had it all along? Or maybe that’s too simplistic?

The book’s structure is straightforward, working as a kind of potted history of punk stepping back from the break-out years of 76 & 77 to examine some of the roots and forerunners of punk. The first chapter introduces the main players – or those willing to talk and still alive – before taking a look at the London pub rock scene of 1971-75, before moving to the key years of 76-78, and rounding up with the “afterburn of punk” in 1979, before rounding things off with an epilogue and a very brief tribute to Malcolm Maclaren.

The chapters are made up of interview quotes edited together. After a while the book settles into a pattern, springing into life whenever Vic Godard, John Perry, Gaye Advert and Wilko Johnson are talking with their experience, insight and humour. There are some intriguing contributions from UA records’ Andrew Lauder and Charlie Harper – I was always a bit dismissive of the second wave of UK punk groups, but he comes across as committed to the cause as anyone in the book.

There are a few rather random US contributors, along with a couple of non-musical folks who don’t add a lot to the narrative. A few pages listing the interviewees with a bit of background and info on what they’re doing now would’ve been helpful.

For the most part, the book adheres to the Sex Pistols/Clash/Damned holy trinity as the embodiment of punk. There’s some examination of the US punk scene (and a bit of padding about the history of the word), but very much based around the now famous New York punk clubs. There’s always been debate about Who Came First or was it more a case of the UK and US scenes evolving separately at the same time, but I’m not sure it’s resolved here.

The earlier part of the book succeeds in capturing and describing the grimy grey London of the early and mid-70s. Everything was pretty ramshackle but compared to now, life was relatively cheap, there were lots of pubs and clubs for live music, and – pre-gentrification – no shortage of affordable flats or squats. It’d become evident that there was a growing vacuum with big name groups playing less & less often, and the presence of a younger audience who wanted to move on from their big brothers’ 60’s heroes. Again, this didn’t happen by accident, and some of the book’s best material concerns pioneers like Dave “Stiff Records” Robinson who’d cut their teeth in the heyday of the US rock scene, as tour manager for no less than Jimi Hendrix. Initially, there was a strong US/Little Feat-wannabe feel about the pub bands like Brinsley Schwarz, Eggs over Easy & Bees Make Honey, but Ducks Deluxe brought in a tougher edge and from there it was only a short hop to link up with the sounds coming from the city’s eastern outskirts in the form of Dr Feelgood & Eddie and the Hot Rods.

Stiff Records showed that the major labels didn’t have a divine right to monopolise what people heard or could buy, and paved the way for the explosion of DIY labels that followed, especially after the Buzzcocks groundbreaking Spiral Scratch ep. John Perry is particularly informative on the ins and outs of a vibrant and accelerating gig scene, and the significance of groups like the Heartbreakers, older and with a background in R’n’B that didn’t exclude anything done the day before yesterday. Whereas the “year zero” outlook of many UK punks quickly lead to a dead end, the Heartbreakers – for all their sloppy junky ways – knew how to put a song together and pace a live set, though it’s a pity their more professional approach didn’t extend to the production of the “LAMF” album.

It’ll be interesting to see where Neil Saint goes next with his writing. He’s clearly passionate about music and communicating that love, which is always a good starting point. Maybe one day there’ll be a multi-volume definitive history of punk rock in all its different times and places, but for now, this is a worthwhile read for anyone interested in hearing what some of the major players – and some footnote and fringe figures – have to say a generation or so later.

You can purchase the book here: