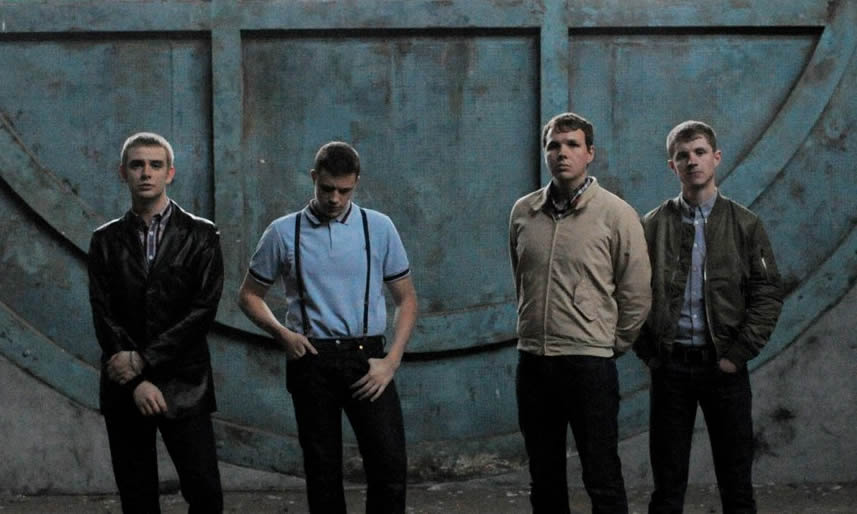 “I felt like I’d got my fucking fire back!”

It’s a Wednesday afternoon in late summer and I find myself sitting in a pub in suburban north London, waiting for the arrival of Billy Sullivan, lead singer and driving force behind Watford four-piece the Spitfires. It’s been a good year for Billy and his band, with 2018 seeing fantastic reviews across the board, and indie chart success, for their third album, Year Zero, an inspired blend of punk, reggae and ska, complemented by the sort of political and social commentary that British guitar music has been crying out for. And not five minutes pass before Billy bounds in with the sort of confidence that oozes from a man who knows he’s released his best work to date.

After grabbing himself a Peroni, Billy settles in and I ask him about how Year Zero evolved. “I was writing the music and writing the melody first. With the words, I was just slotting them into the music like it was a guitar line, which I think has really paid off because I think that’s where the catchiness of some of the songs comes from. If you took the words out, you’d still remember the tune” he explains. The record clearly marks a step forward in his songwriting as he pulls off the difficult task of blending dub reggae, punk anger and ballads into a cohesive album. In the view of this writer, Year Zero is the best guitar album of 2018.

One of the album’s standout features is Sullivan’s ability to combine strong melody with sharp social commentary, with ‘Something Worth Fighting For’ a shining example of this. ”I’d always wanted to write that sort of song with a reggae thing”, says Billy, “but if you do it badly it sounds really shocking. I was holding back for a long time but when we pulled off [reggae-inspired 2017 single] ‘Move On’, I had a bit more confidence in that and ‘Something Worth Fighting For’ I wrote the next day. I think that’s our best recording to date, that track individually, I think the production on it is really good and again it’s got that space element that we didn’t have on the other records, that I really like”. The song talks of yearning to escape from dull towns, boring jobs and humdrum existences, a theme that runs through Year Zero, reaching its emotional peak on ‘By My Side’, a beautifully constructed song that’s about the desire to leave, whether it’s a relationship or the personal or social situation you might find yourself in.

“On the other albums I’d done a bit of poor me, poor me” says Billy of how ‘By My Side’ came about. “It don’t necessarily have to be about a relationship, it could just be about getting out of whatever place you’re in. My way of doing that, fortunately, because most people don’t have it, is I jump in a van and I fuck off up the country, it’s that sort of thing, right; you do what you want but I’m getting in this van and I’m going, and I’m going to go and do whatever I want to do, I’m going to go and see different places and different people”. That song’s very personal though, isn’t it? “There’s a personal element to this album but not too personal because I’m far too fucking boring a person to write about myself, so I have to exaggerate and make it about other people” confesses Sullivan, self-deprecatingly.

He then turns to the troubles the band had in and around the time of their second album, 2016’s A Thousand Times. On reflection, the album was every bit as good as their startling debut Response but just didn’t click so immediately with the band’s fanbase. “The second album come out in August 2016 and I think by the time it come out we were all quite underwhelmed by the feedback it got, and we were underwhelmed by ticket sales for the tour as well, and it felt like it took a lot longer for people to click with it, or for people to understand the album or whatever; it weren’t as instant as maybe the first one was. People just didn’t get into it at first I think. They did eventually, but at first it felt like we were sort of fighting a losing battle”. This catapulted Sullivan into a period of self-doubt, wondering if he should carry on. “I think with this album [Year Zero] I tried to prove to myself that I was worthy of carrying on doing this I suppose and my songwriting was worthy, because you get to that point where you just suddenly think have I created all this fucking self importance and all that sort of shit in my own head, and people don’t actually think that much of us? I felt someone needed to grab me by the shoulders, shake me and go, you know, ‘Go and do something! What you’re doing is good so fucking carry on with it’”.

With the introduction of new keyboard player George Moorhouse (’soft as shit’ chuckles Sullivan when I suggest that George looks like he’d be handy in a scrap) things began to pick up as the band received an injection of energy and Billy felt revitalised. “I felt like I’d got my fucking fire back a bit, I suppose, writing this one” he says, and out of this renewed vigour came ‘The New Age’, a ferocious attack upon the arrogant complacency of middle-aged men in power who are out of touch with reality. Another highlight of Year Zero is ‘Frontline’, which is, explains Billy, about the “rise of the far right, the rise of the media. A lot of people are feeling trapped and then they’re being told to blame this person and that person, and that religion or whatever, and I suppose the lyrics are saying it’s time to fucking stand up and say you know what, if my life is going down the pan it’s me that’s got to fucking change it, I’m not going to blame anyone else for it”.

Taking responsibility for sorting out your own life is typical of Sullivan’s positive lyric writing, which constantly challenges the listener to get up and do something, to break out of the mentality that they can’t change anything as their fate is out of their hands, which is the haunting refrain from the album’s closer, the melancholic, downbeat ‘Dreamland’. Comparisons with the Specials’ mighty ‘Ghost Town’ are inevitable but well placed, with ‘Dreamland’s’ tone of despair and uncertainty reflecting the troubled times we live in. “The revolution’s awaiting a Facebook event in the hope that it’ll then seem real” sings Billy on the track, a brilliant summary of where we seem to be as a society. It’s not often that a lyricist hits the nail on the head and captures the zeitgeist quite like Sullivan does on Year Zero. He sees the whole record as representing “a week in the life of normal people; that’s what it sounds like to me, there’s all sorts of shit going on. Your bird dumps you, fucking World War Three kicks off, that sort of thing”, with the whole record creating “an end of the world theme. I don’t know if I achieved that but that’s the sort of thing I wanted, this sort of dystopian, eerie feel to it”.

“You can’t fix the fucking world through music, as much as I’d want to,” Billy continues, reflecting on the fact that some of the band’s fanbase just don’t seem to understand their politics. “I had a gig recently where someone come up to me and made some comment about Islam and Islam taking over, and five minutes before he’d been talking to me about how much he enjoyed the album and I felt like saying to him, ‘What part don’t you fucking get mate? You tell me how much you enjoyed it, are you actually listening to it?’”.

Visibly annoyed, Sullivan turns to the double-edged sword that is mod: so clearly an influence on the band but one that seems to have become a straightjacket, holding them back. “Unfortunately I think the whole mod thing has come back to bite us on the arse because it might have done us a few favours at first, because we were different looking and we were young and we’re into what we are, and we still are into all those bands and all that music and those clothes. But you know, unfortunately, mod as it is, is so backward and nostalgic and retro and a different generation from us for a start, there’s not many young people into it, and we’re pigeonholed by that”.

It’s not that Billy isn’t grateful for the band’s loyal support. “I appreciate anyone who’s bought a ticket or bought a CD or travelled to come and see a band, it’s not about that; I welcome anyone at the gigs. It’s that understanding of it I suppose because I like to think that we’re a good band that play and write intelligent songs, and I’d like that to be considered more, rather than just ‘Go on Billy, jump with your fucking Rickenbacker!”

And while Year Zero has gained significant airplay the band still feel like outsiders to the mainstream music industry. “I think it also holds us back in terms of the attitude towards the band from the music industry, which thinks we’re some sort of fucking joke or something. But then the sales figures come in and the chart positions come in and it’s obvious we ain’t a fucking joke. We just want to keep progressing and keep doing different things and that’s what I think the true meaning of modernism is I suppose”.

After a couple more beers and chatting about some of his big musical influences – Paul Heaton, Billy Bragg, Elvis Costello – and despairing at the car crash that is Morrissey’s politics (“just don’t”, he sighs), Billy says “Sorry mate, got to go, band rehearsal” and bounds out of the door with as much energy as he entered the pub an hour ago – a man on a mission, taking on the music industry his own way and, despite his earlier denials, trying to change the world, one song at a time.

Year Zero is out now on Hatch Records.

This is Jon’s first piece for Louder Than War.