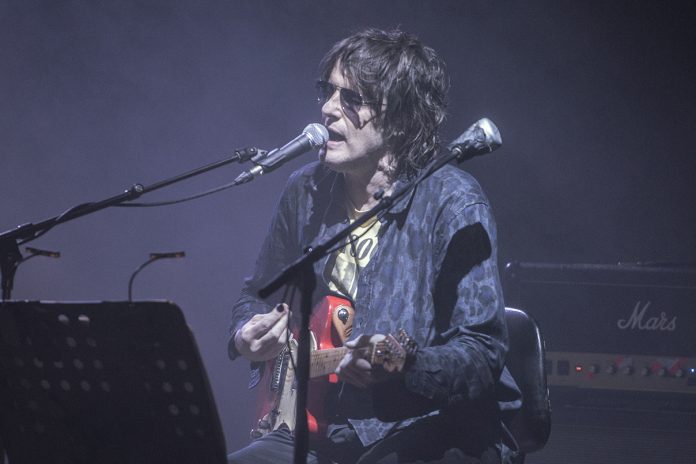 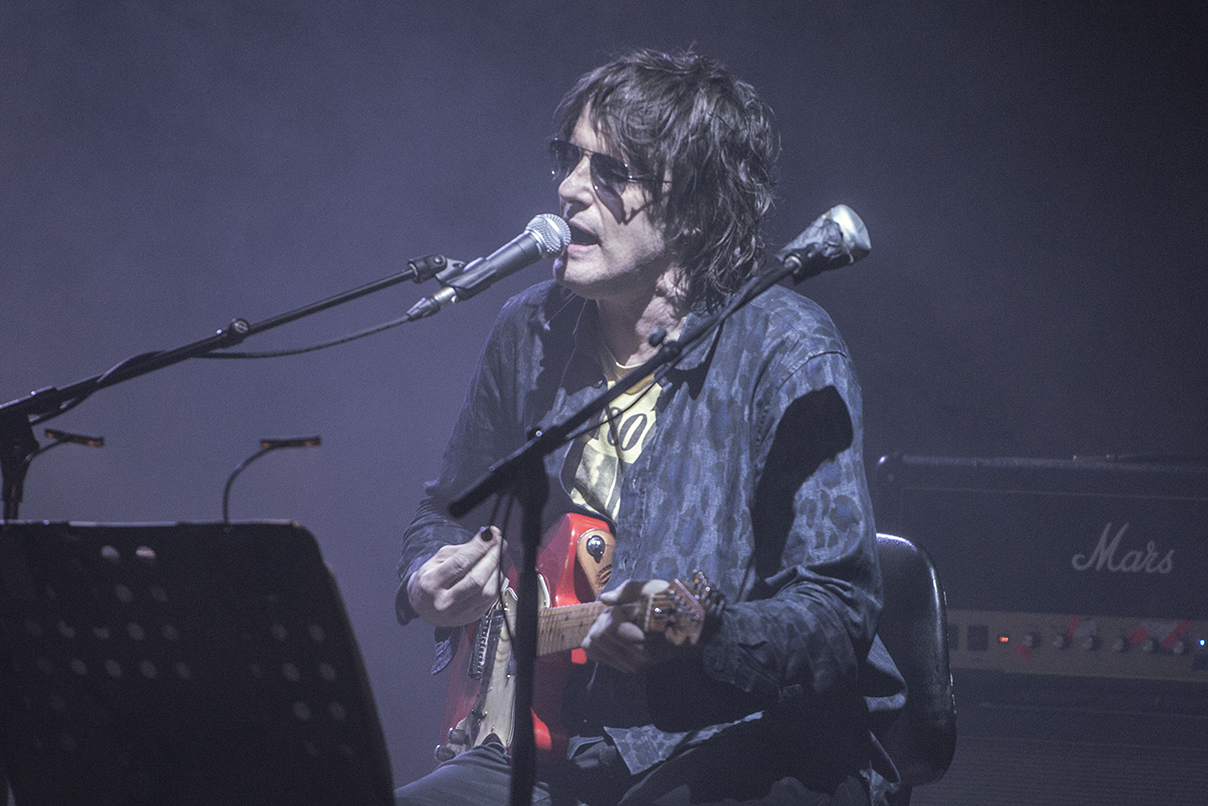 Spiritualized deliver a religious experience to those attending Manchester’s Bridgewater Hall on Sunday night. Iain Key and Banjo were there for Louder Than War

Iain Key – I’m not sure how it’s happened, but it’s 25 years since I last saw Spiritualized live. A whole generation ago. Ironically the last time I’d seen them play was just around the corner from the Bridgewater Hall, at the Hacienda, It was a Sunday then too, 15th June. Just under 2 weeks later the iconic venue would close for good. I suspect I’m not the only one at the gig tonight who had been there 25 years ago; there will a few here too with kids who wouldn’t have been born. The Bridgewater Hall, I find, is always a little strange for ‘bands’ with it being all seated, the sound of course though is perfect and probably picked by Jason for that reason. The crowd is mixed, those looking like they’re coming for the Proms, hipsters, slackers and would be journalists.

Support this evening comes from British saxophonist John Butcher, who, as I found out later, is one of the leading figures in the world of avant-garde free improvisation, as well as being a member of the Spiritualized ensemble. After a brief 20min set, he leaves the stage. It’s not long before the main act arrives. 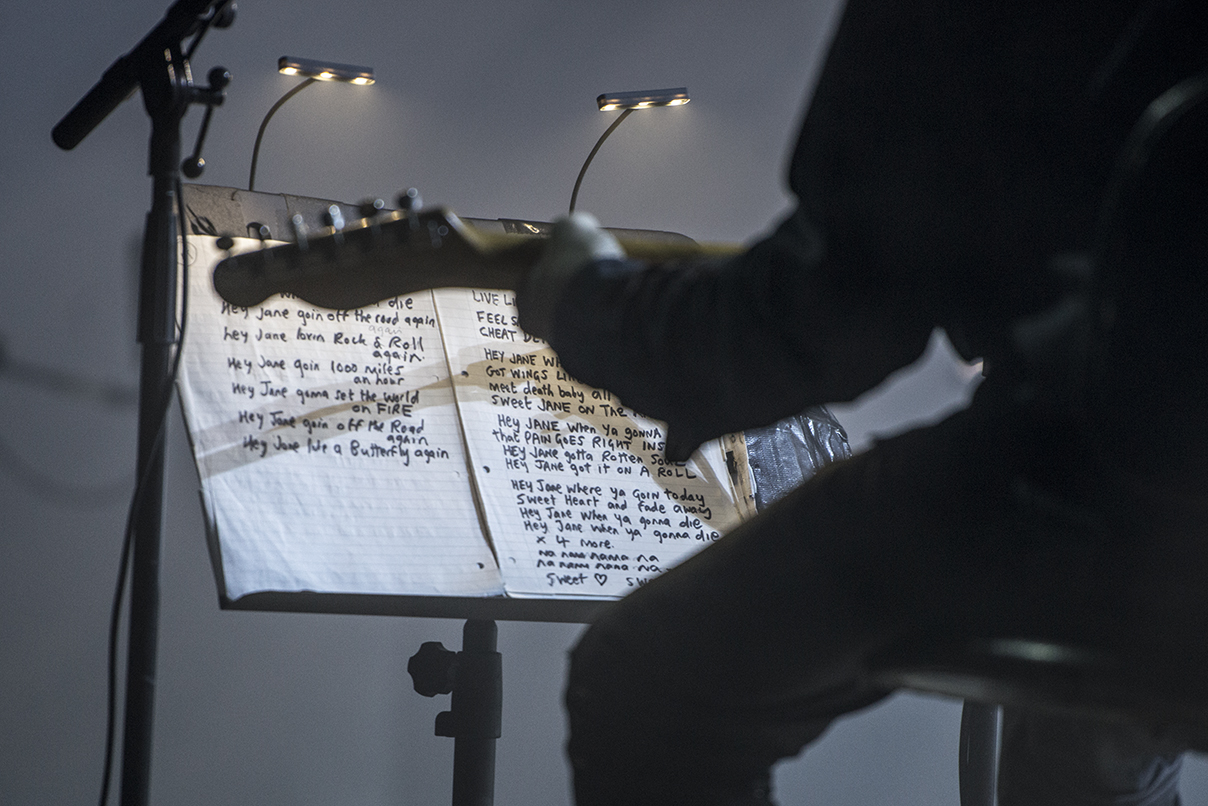 This doesn’t feel like a gig, it’s more than that. Kicking off with Hey Jane and She Kissed Me (It Felt Light A Hit) the sound system is given a workout. Although we’re sat to the left of the stage, and technically behind the majority of the band, the acoustics are perfect. Surprisingly, rather than playing tracks from Everything Was Beautiful we are treated to a mesmerising rendition of Shine A Light. It’s religious, I can’t put it any other way. The hairs on my arm stand up and I have goosebumps as the sound envelops the audience. Although I’m Coming Home Again is next, which could have easily been an encore, we then get 4 tracks from And Nothing Hurt. The gorgeous A Perfect Miracle; I’m Your Man; The Morning After and Here It Comes (The Road) Lets Go. In fact, the more is played from the previous album than the current one. Not that I’m complaining.

The band are on top form tonight, as are the backing singers. I’ll be honest, an hour into the two hour set I was just soaking it all in, the sound and light being hypnotic and transporting me elsewhere. Looking around I wasn’t the only one, plenty of staring eyes and heads nodding in time to the music. The main set closed on the trio of Soul On Fire, Come Together and Sail On Through. Jason mutters “Thank You,” before leaving the stage, the only words he’s spoken thus far. The band then return for a glorious So Long You Pretty Thing, providing one last blast of intoxication before we’re ushered out into the cool Manchester air.

Banjo – I first saw Spiritualized back in 1991, a frankly ridiculous 30 plus years ago. Since then, I have taken every opportunity to see them live and this week’s gig at Manchester’s Bridgewater Hall was my 40th Spiritualized gig. So what has changed over the years? Well, the most striking difference is the size of the venue for this latest gig. It’s a long way from the sticky carpets and 400 capacity of Liverpool’s Krazy House in 1991 to the sleek, vast and modern Bridgewater Hall. This is not particularly surprising, as Spiritualized have always been one of the best live bands you could possibly lay your eyes on. 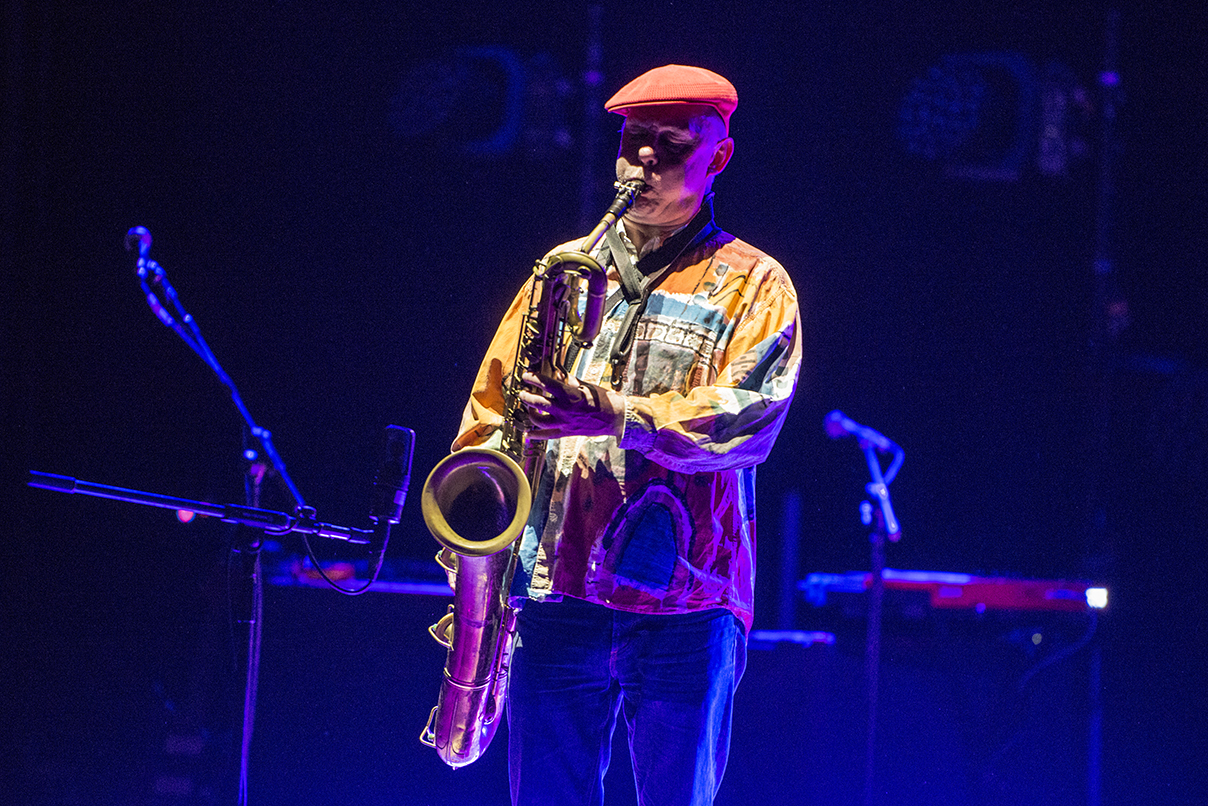 Such is their popularity these days that we are sat in the gods, four flights of stairs up from the stage. This lofty position grants us a view of Spiritualized that I have never had before, one that seems to be above the area they are actually operating in. I have seen them play large gigs before, such as when they headlined Glastonbury’s second stage for three successive festivals, but this is the first time I have seen them from this high up. It affords me quite a unique perspective, although it also makes me feel somewhat removed from the space where the action is happening.

The stage is set up with amps and microphones in a horseshoe shape, giving the show a hint of the rehearsal room. The lights dim and a huge cheer goes up as musicians wander on and take up their positions, a cheer which grows louder as head honcho Jason Pierce walks out from the wings and takes his place on his stool, stage right and they launch into Hey Jane. Towards the end of the song, they indulge in some of their customary freestyle noise wig outs as strobe lights strafe the audience. Way down at stage front, I know that the effect of this is an intense, blistering auditory and visual overload, but from so high up it is quite odd watching the squall take place below but not quite being part of it, a bit like looking out of a plane window.

The next song She Kissed Me (And It Felt Like A Hit) again comes to an expanded noisy ending before the music suddenly turns into the quiet, reflective start of Shine A Light. Spiritualized have always been good at this sort of thing and it is an ability that the years have failed to dull. 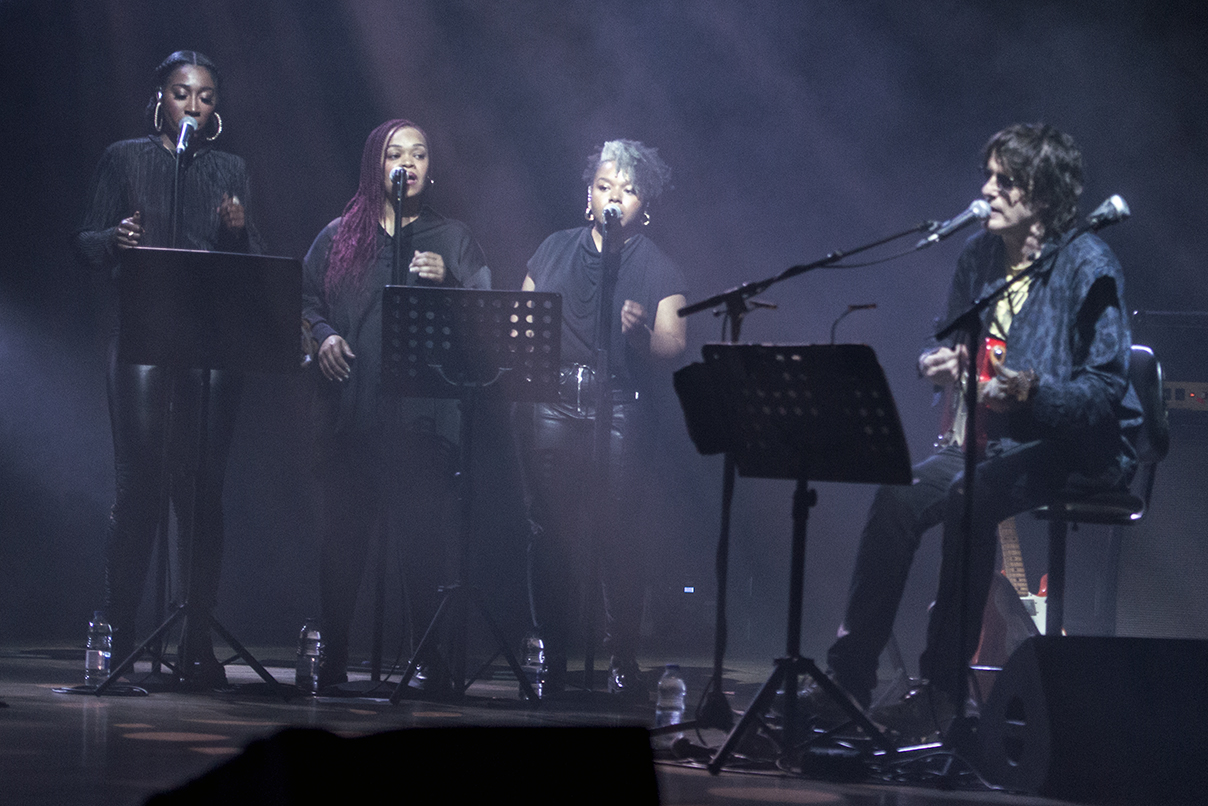 At this point, I must confess that I have no idea who is actually in Spiritualized these days, but Pierce has long had the ability to surround himself with like-minded and sympathetic musicians and the latest incarnation is no exception. There is no grandstanding, no flash and no frills, the music Spiritualized create is good enough to stand on its own without that kind of thing.

Towards the end of the set, they play the magnificent Soul On Fire and go straight into Come Together and they are as good as I have ever seen them before, despite the altitude sickness that is surely affecting me by now. 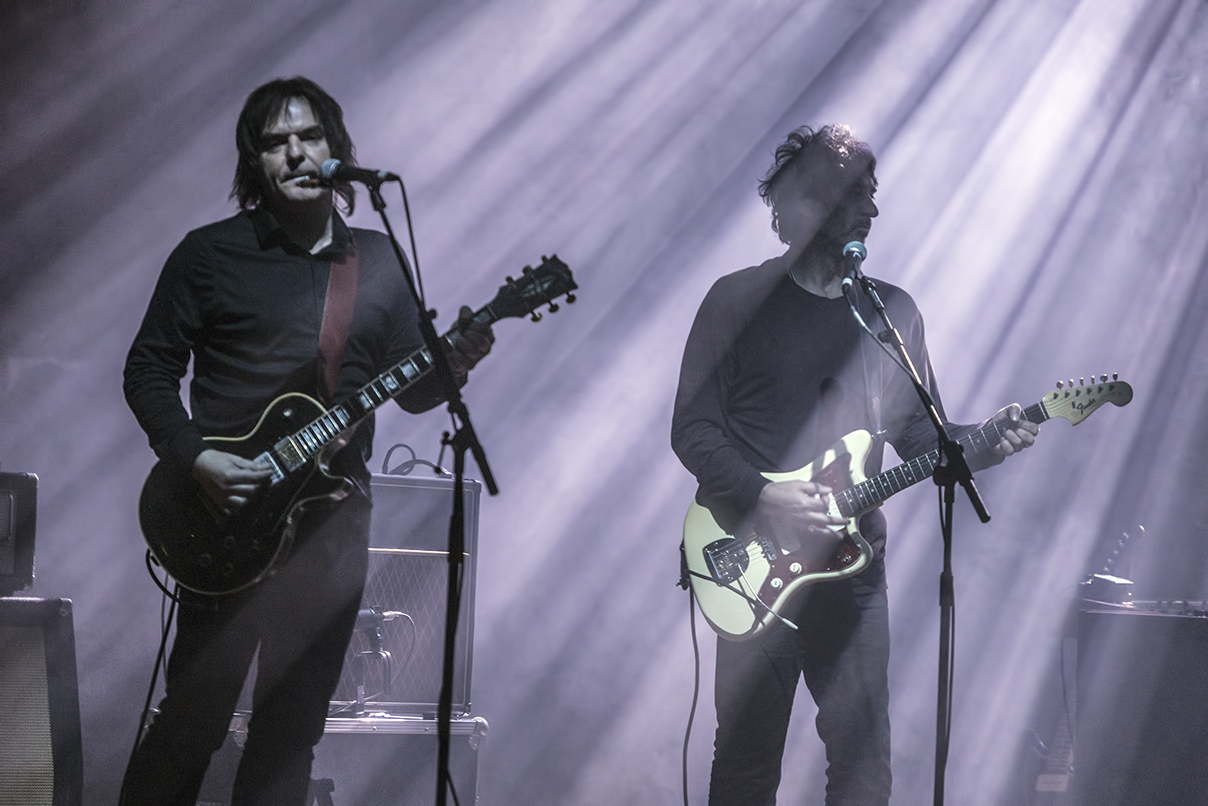 The end of the set is quite low key, finishing on Sail On Through before coming on for an equally low key So Long You Pretty Thing. There is a pleasing refusal to play by the rules here and to go out with their biggest songs. Spiritualized have always been a band that plays by their own rules and it is pleasing to see that this is still the case.

Over thirty years of Spiritualized gigs has led me to the conclusion that they are one of the best bands Britain has produced and that their ability to sell out larger venues is something that is hard earned and well deserved. We should treasure them, we will never see their like again. 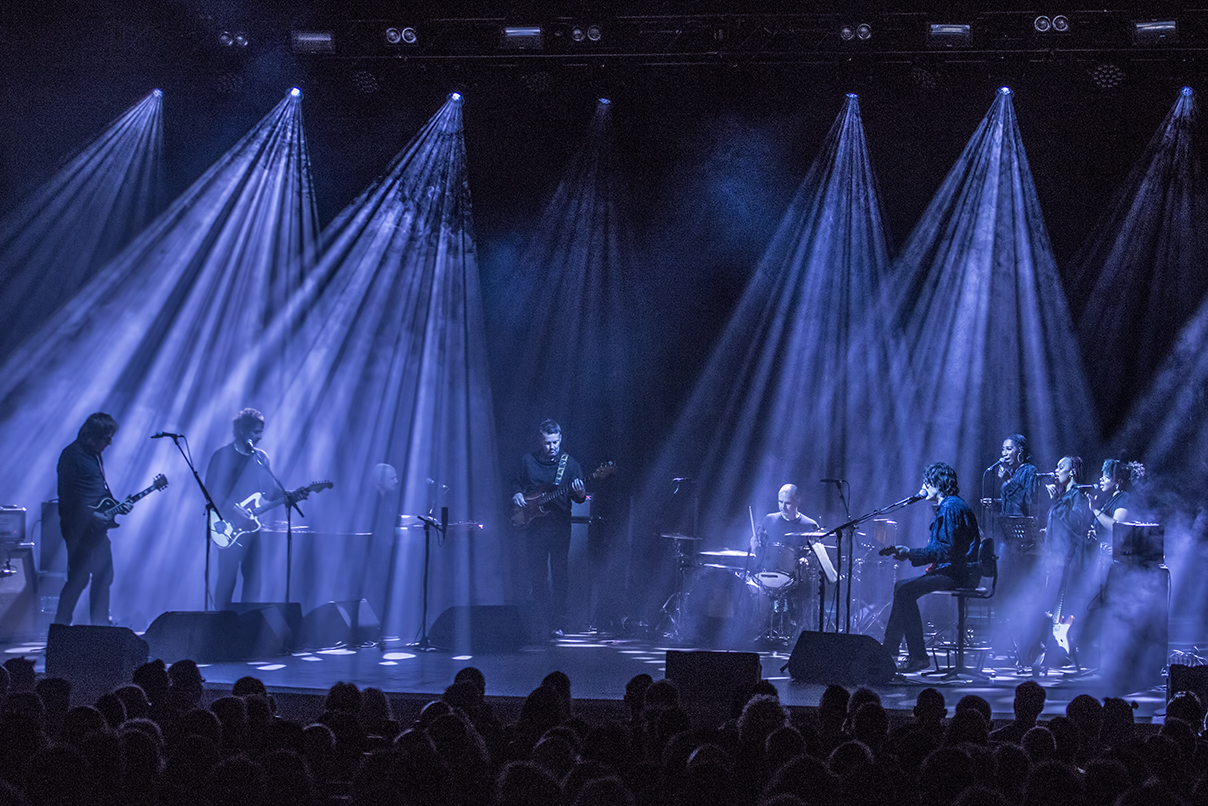 For words by Iain Key, you can find his Author profile here

For more words by Banjo, you can find his Author profile here