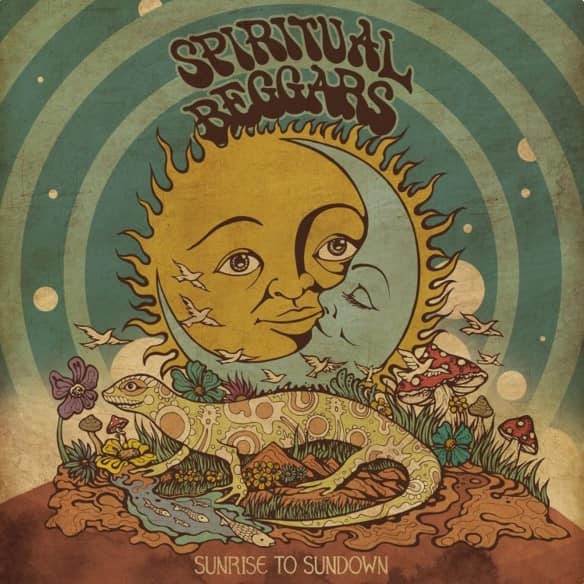 Describing themselves as “the band that refuses to die” is a fair enough call. Spiritual Beggars have been on the road and rocking since 1992, their self titled debut following a couple of years later. Headed by Michael Amott whose CV includes Arch Enemy and British death metallers Carcass, the Beggars keep plodding along, doing their thing when scheduling and inspiration allows. ‘Sunrise To Sundown’ finds them three years on from  2013’s allegedly Deep Purple influenced ‘Earth Blues’ and ploughing a not too dissimilar furrow.

Released on Inside Out, a label typically associated with quality prog rock releases, it speaks volumes that when the label  wants to add  something a little more diverse in their catalogue,  the strictly prog Inside Out diet gets supplemented  by a quality hard rock outfit.

Spiritual Beggars, for the uninitiated, have  overcome  a few line up changes in their time, as you do,  but with new-ish recruit Apollo Papathanasio holding down the vocalist slot  in the band since 2010, the line up is much more stable. The result?  ‘Sunrise To Sundown’ comes over as  much more of a band effort.  To cement the position, they made the album in the good old fashioned (in the finest sense naturally) way of recording as one in the studio. No reliance on digital trickery,  tomfoolery or file sharing from recording in your garden shed. It sounds the part too – very spontaneous,  raw and organic. An attitude of ‘play the song once through and then record’. From the opening title track, a huge slab of hard riffing rock which defines the term, there’s an unmistakable freshness and vibrancy about a set of songs,  which despite being in the flush of first release, feels like and could well turn out to be their finest piece of work.

To further whet the appetite,  the reedy organ which introduces ‘Diamond Under Pressure’ is classic Purple, a recurring theme or reference point, picked up on with the pacey ‘What Doesn’t Kill You’.  It’s Per Wiberg’s understated but immensely significant keys which tip the balance. Having said that, Amott has also talked about the fact that ‘Sunrise To Sundown’ has more diversity. A couple of songs he believes take on a more nineties riff directed flavour, together with some longer songs.  Of the longer pieces, ‘No Man’s Land’ and ‘Lonely Freedom’ are the crème de la crème, swirling round the record and then  rising to the surface like, well…cream. The former, mid paced and more towards the epic end of the scale, adopts a distinctive shift of tone and instrumentation in the middle section which brings to mind a particularly well known songwriting duo (more of which later).  ‘Lonely Freedom’ is more of a slow burning and atmospheric journey, adding the odd electronic throb to the hypnotic  guitar rhythm and  leading into possibly the best howling axe  break on the record.

Heck, main songwriters Michael Amott  and keyboard player Per Wiberg have even gone and done their version of  Lennon/McCartney on much of the material for the album; passing melodies and music between each other to polish off the songs – a classic example being ‘Diamond Under Pressure’, originally a Wiberg instrumental (and a cracking one at that it must have been).  Oh, and that middle section in ‘No Man’s Land’.

While the likes of new boys at the party  Inglorious have been revisiting  the vintage hard rock sound, Spiritual Beggars, even with their stoner background, have played the hard rock card to perfection. Despite lifting  their heads above the surface and emerging  in fits and starts, or when timings and gaps in schedules allow, they show it’s always worth saving a  place at the table for a band who uphold traditional values. Even down to the swirling pseudo psychedelic artwork and release on vinyl,  ‘Sunrise To Sundown’ carries things off with aplomb.

Watch Spiritual Beggars lyric video for ‘Diamond Under Pressure’ from the album here: