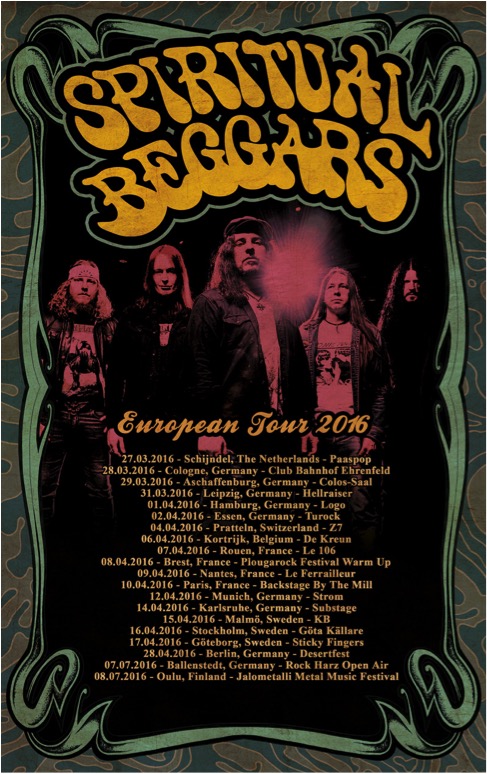 Swedish vintage style hard rock pioneers SPIRITUAL BEGGARS return with their 9th studio album entitled “Sunrise To Sundown”, which will be released on March 18th, 2016 in Europe as well as March 25th, 2016 in North America via InsideOutMusic.

Therefore the band is now debuting the album’s first single for the title-track “Sunrise To Sundown” and you can check out the song here:

SPIRITUAL BEGGARS guitarist Michael Amott checked in with the following comment about the song:
“I wrote ‘Sunrise To Sundown’ last year and brought into the jam room, where it very quickly went from a basic idea to a finished arrangement in something like five minutes! Some songs come fast and others take time to fully develop, you never know when inspiration hits you…and therein somewhere lies the beauty of creating music. The lyrics follow that train of thought too, talking about following your chosen path and turning your dreams into reality – two things I believe in very much.”

And a digital album pre-order (with immediate instant grat of the title track!) is available on ITunes and  Amazon.

The album’s cover artwork was created by Costin Chioreanu / Twilight13Media (At The Gates, Grave, Arcturus, etc.) and here is the album’s tracklisting:

The album’s limited edition version will be released as 2CD Mediabook with a bonus disc including 7 tracks (2 cover versions and 5 live songs) and an expanded booklet. The LP format will be on 180gr. vinyl and come in gatefold packaging with a double-sided poster as well as the full standard album on CD as bonus. More details about the album formats and pre-order links will be announced soon…

After a busy couple of last years with Arch Enemy, Michael Amott and his bandmates have once again found the availability and inspiration to lay down 11 dynamic and uplifting new songs, which not only easily demonstrate how much on top of their game SPIRITUAL BEGGARS still are after over 20 years of activities, but also add a fresh and spontaneous vibe to their impressive catalogue.

Supporting the release of “Sunrise To Sundown”, SPIRITUAL BEGGARS will also be hitting the road on the following club-dates as well as festivals :