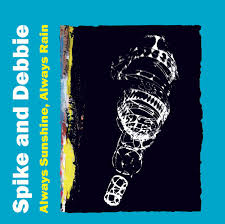 Compilation of the work of Spike Reptile and Debbie Debris from 1981 to 1995, including selections recorded under the names Table Table and Bomb And Dagger…Ian Canty hears three separate stages in their development, each with its own individual charm…..

Issued on the same day as Spike’s new album with Alison Statton Bimini Twist, Always Sunshine, Always Rain looks back at his collaborations over the years with vocalist Debbie Debris (Deborah Pritchard). It is tempting to compare these recordings to the ones he made with the ex-Young Marble Giants chanteuse or even see them as perhaps prototypes for those works (the first album with Spike was Weekend In Wales, released in 1993 and Always Sunshine, Always Rain documents recordings made from 1981 to 1995). But what is offered here is different and goes through three separate stages of development, exploring areas not touched on in his work with Alison. Although Spike is adept at providing lush musical setting as always, Debbie’s bright voice and lyrical skills give the songs their own flavour.

To begin with the pair first worked together in the band Table Table, originally a trio with Lewis Mottram. By the time of the first recordings here Lewis had left and Dean Broderick had come in on drums. Perhaps having a little in common with say the Marine Girls early efforts, Table Table at this stage were a light Post Punk skiffle style affair, brittle but capable of beauty and insight. There is a sense of wonder in the lovely Always Sunshine and while Paranoid System may have the kind of title you might have expected Discharge or Chaos UK to have come up with, it is a gorgeously frothy bossa nova.

Table Table’s presentation may have been mostly sunny and upbeat, but they were not frightened of putting bite into their lyrics. In fact the anti-capitalist Houses is positively virulent, an acidic attack on 80s social climbers and yuppies, but all contained in a snappy and catchy Pop tune. Assured Energy is also noteworthy, one of four tracks produced by Stuart Moxham (YMG, the Gist), a deft example of Indie Skiffle. Spike was working with Weekend during much of this time, so when that band nudged the charts these tunes and indeed Table Table were put on the back burner, not to return until now.

After Weekend split Spike again hooked up with Debbie in the band Bomb And Dagger (Tracks 9 to 14 here). Here is where their Afrobeat/Township Jive influence, which was shown in its infancy on Table Table’s Seaport Town, gained ascendancy. B&D were a much larger aggregation than Table Table, numbering 8 and 9 members in the recordings presented here. According to the sleeve notes the band was well appreciated locally in Cardiff, but found the going much harder outside of their hometown.

Which was nothing to do with their talents, as they were lively and jolly with sax and trumpet featuring prominently. Bomb And Dagger are probably best served by the heartfelt and very catchy Strike and No Real Place. The latter is an excellent piece of song-writing, communicating something deep about the human psyche in relatively few words, married to a driving rhythm. Spike And Debbie had not lost their values through the change of personnel, with Learn Not To Be Their Clown rallying smartly against being ground down by the forces of the state, intelligent and subversive words again. This band only released one tape, a single and a compilation track (the aforementioned Strike) in their lifetime before splitting after a particularly gruelling European tour which saw Bomb And Dagger shed members due to money troubles and much internal friction.

Though the two sets of 80s recordings have undoubted appeal, the last six tracks recorded under the name the Pepper Trees find Spike and Debbie at their peak in my opinion. Debbie’s voice had improved with age and the music is a sparkling accompaniment, adjusting perfectly to the emotions portrayed on each song. It is a crying shame that the band never released anything during their existence. Each song is excellent and though the Pepper Trees had moved away from Bomb And Dagger’s exotic sounds and towards a folk-inflected Pop direction, the arrangements and delivery are wonderful.

Rushing Nowhere resonates for me, it puts into words the frustrations of trying to find some peace in speed-obsessed city life, a spidery guitar and ghostly piano riff providing an excellent setting for Debbie’s slightly worn but hugely enchanting vocal. Nomansland is as you might expect an anti-war song, but some great guitar and a nod to Magazine makes it stand out and Wall flows ebulliently. Tunnel Of Trees is a lovely way to end, a drifting and eternal soundscape effortless constructed by Spike – the work of a master.

It is great that Tiny Global Productions have released this album because it shows how much Spike And Debbie progressed and achieved with each different combo, finding a distinctive niche of their own each time. They certainly warranted more attention than was received. A valuable selection of often inspired music that existed outside of the mainstream for no good reason, other than Spike And Debbie probably wanted it that way. Fans of the Young Marble Giants and intelligent Pop Music will want to snap this up, as should you.

You can chase up Spike and Debbie on Bandcamp