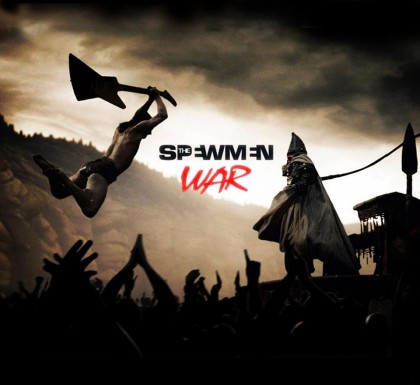 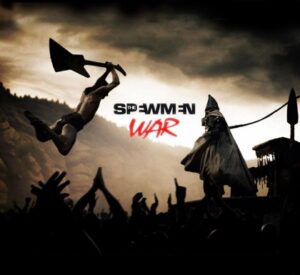 Joe Whyte reports on The Spewmen’s album release and finds something a little out of the ordinary from Louder Than War  friends Closer Records.

Closer Records have been quietly releasing a raft of garage rock and roll records of high quality for some years now. We’ve reviewed many of them on the pages of LTW and the standard is consistently good. Recent releases include The Primevals “Tales Of Endless Bliss”and Cantharide and they’ve been solidly building a roster of artists that are a little bit out of the ordinary.

The Spewmen are diametrically different from many of the other Closer bands; slicing, industrial guitars, pummeling drums, vocals buried deep in the mix and thumping, subsonic basslines. Eschewing the Gun Club/Cramps/ Seeds axis for influences like Jesus Lizard and Killing Joke, The Spewmen create a seething morass of thunderous sturm und drang, leaving the competition beaten and bloodied in their wake. Even the cover (above) isn’t a typical piece of Closer artwork. with its sinister overtones and dark tenor.

Incidentally, being French, I wonder if  The Spewmen are aware of the meaning of “spew” on these shores. Certainly, as a Glaswegian, it conjures up to me, images of drunk guys lying in their own vomit at a bus-stop late at night. We’ll let them find that out for themselves, though….

Opening song The Road sets the scene nicely. Cleaving guitars, neatly placed vocals and a snaking bass all present and correct in an energy-filled, nuclear blast of a song. They’re very much on the cusp of genres; they’re not metal, not quite industrial and too modern to be classic rock. I guess it’s not a bad thing to be unclassifiable and setting ones own agenda can only be a good thing for the band.

Underground is a more melodic work-out but the intensity and fervour of the album remains throughout. It’s only six songs in duration (I guess it’s a mini album rather than a full-length) and although there’s little let-up in the ferocity and stoner-deluxe sound of the songs, it’s one that demands you return to. It’s certainly not my usual comfort zone as regards music but I’ll admit that I’ve been enjoying the record rather a lot. It actually reminds me a little of Dundonian math-rockers Fat Goth in the way it’s brutalist and savage but detailed and graceful at times, too.

Dirty Sound  is a great example of what The Spewmen do so well; ferocious guitars and sonorous vocals allied to a rhythm section that literally sounds like a truck barelling down a highway. Queens Of The Stone Age are an obvious touchstone but these guys are putting down a marker very much of their own.

It’s War all right, but not as we know it.

The Spewmen are on Facebook and you can check out their reverbnation site.

Words by Joe Whyte.  You can read more of Joe’s writing at his Louder Than War authors archive.