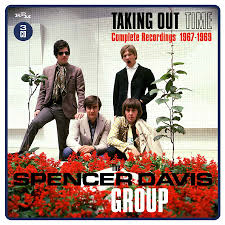 3CD boxset of all the 60s post-Steve Winwood recordings by R n B/Psych Popsters the Spencer Davis Group, including two LPs “With Their New Face On” and “Funky”, singles and outtakes plus unreleased BBC Sessions. Also included is an accompanying booklet featuring a full history of those hectic times with the participation of the eponymous band leader and members of the later version of SDG Ray Fenwick and Pete York…..LTW’s Ian Canty ponders whether a band can truly prosper after the defection of what many would see as their leading light….

On the face of it, the Spencer Davis Group should have been relishing the year ahead as 1967 dawned. They had reached the top spot in the UK charts in each of the previous two years (with “Keep On Running” and “Somebody Help Me”) and had just narrowly missed it again with the number two hit “Gimme Some Lovin”, which also made the US top 10. On top of that they had just pipped the Rolling Stones to the title of “Best R n B Group” in the then prestigious NME Awards. Yet all was far from rosy in the SDG camp…..

Wonderboy Steve Winwood, the band’s youthful face and voice, was growing restless with what he saw as the slightly old fashioned approach of the band in the face of the burgeoning Psychedelic scene and wished to move on to a band of his own construct that would follow that pathway. After another hit single in early 1967 with “I’m A Man” he would head “back to nature” with his band Traffic and leave group leader Spencer Davis with a headache and a sizable poser. How would he replace Winwood (and indeed his brother Muff too who also absconded at the same time) and even if he did manage this effectively would it still sound the death knell for a pop group seemingly on the precipice of huge success?

History tells us that that sadly for the band, the material recorded with two replacement vocalists did not have the commercial impact required to keep the band at the same level and by the end of the 1969 they were consigned to history, for a while at least (they reformed in 1973 and released the album, the unusually titled “Gluggo”). For any band the loss of a singer is problematic, with the popular view being that changing what many fans see as the signature sound of a band almost always being for the worse and that is without even taking into account the obsession that some have with “original line-ups”.

Possibly buoyed by the implied criticism by their once leader that they were a little fuddy duddy, their first single sans Windy “Time Seller” is classic piece of cello-dominated Psych Pop. Newcomers Phil Sawyer (ex-Les Fleur De Lys, the excellent Southampton Freakbeaters) and Eddie Hardin perform admirably and though the public reaction was muted this 7″ gem it still made the top thirty (just). The flipside “Don’t Want You No More” is far more in the Mod Rhythm and Blues mode which they first found fame with, toting a mean wailing guitar and lovely Hammond organ break. All of which adds up to a great single in fact.

Around that time the band provided some soundtrack pieces for classic 60s rites of passage sex-com “Here We Go Round The Mulberry Bush”, ironically alongside Traffic. These range from the rather beautiful and evocative “Virginals Dream”, a lovely combination of harpsichord and horn, to the raw Mod Blues “holler and dance” of “Looking Back”.

The soundtrack contributions and single (which are the first tracks on disc one of this collection), when put together, point to considerable promise and certainly not evidence of a band being left behind by the times: they had craftily grafted a mild lysergic influence to their core sound and upped their energy level. All of this led up to their final hit single “Mr Second Class” around the time Ray Fenwick replaced Phil Sawyer as vocalist when the latter ran into domestic trouble. It is difficult to see why this superb waxing stopped short of the business end of the charts, being a thrilling, howling bit of soul strut wed to a Ray Davies type of sharp character study, it is truly excellent. The flip “Sanitary Inspector”, a weird Psychedelic waltz interspersed with a sure pop hook-line, is similar in subject matter, a great piece of 60s pop. If they were going to have one last chart hurrah, well this wasn’t a bad way to go out at all. “After Tea”, a great cover of a song by Dutch band of the same name, which although it flopped chart-wise, made it three great singles for the new look band on the trot and meant despite that setback all was not lost.

The album “With Their New Face On” wryly tipped the nod to the band’s new incarnation and is as pleasing a pop album as emerged in that time of trippy introspection. Including the first two hit singles ( though re-voiced by Eddie Hardin and Ray after Sawyer’s exit), a practice which was par for the course with the record companies squeeze for profits back then, but with such winning numbers having them a second time is no real hardship. Though it makes for great listening today you can kind of understand why the hip in-crowd didn’t go for this record at the time – “Alec In Transitland” and half the LP harked back more to their sweaty late night sets on the club circuit and the rest was gentle Psych that was already beginning to show its age by the middle of 1968.

Though understandably a little discouraged by the reception to the album the band persevered and on disc 2 here we find their final recordings including the LP “Funky” plus some outtakes that never made it to the official releases. The remodelled version of the band (now without York and Hardin, but with future Elton John bassist Dee Murray) put out a German only funked up cover of “Aquarius” from the “Hair” soundtrack and the heavier “Short Change” which predicted how the Charlatans would sound 22 years later. Next came the album “Funky”, quite an apt title as the Spencer Davis Group were looking more to US for inspiration, not only musically either (no that’s “Raintree River” not Braintree River). Looking suitably hairy on the LP sleeve, the band kept their pop smarts in check a little whilst exploring even Country Rock on “I Met A Woman” (everyone was doing it at the time) and “Letters From Edith” rocks out authentically with some neat guitarwork at a nippy pace.

Overall “Funky” is perhaps not as immediately enjoyable as their previous album and probably slightly a lesser record, but does have some good tunes. Singer Ray Fenwick writes all the songs on this album and although there isn’t anything quite as good as the 1968 singles there is a definite talent on show here. “Misguided” has a sort of “House Of The Rising Sun” vibe and is complimented by a stinging guitar riff and punchy brass section. “And The Gods Come Down” is almost Proto-Prog – certainly a long, long way away from “Keep On Running”, which may not have been to their original fans’ taste but proved that they were open to exploring new avenues and ideas.

Ironically the most well known number on show here wasn’t even released under the Spencer Davis Group name – recorded as the Murgatroyd Band, their theme to ITV’s “Blue Peter” clone “Magpie” lives on long in the minds of children of the 70s and one can’t listen to this without thinking of Mike Robinson’s incredible afro, Susan Stranks and Tommy Boyd’s inflatable trousers….anyway I digress, back to the task at hand. This would be the last we would hear of the Spencer Davis Group for four years and the end of their 60s recording career. Here though this disc is buoyed by some great bonus tracks which certainly aren’t studio sweepings. The gorgeous strings version of “I’m Lost” is so lovely you struggle to rationalise why it never got a proper realease and the two part “Pools Winner”/”Groove Extra” is a stylish keyboard romp that brought to my mind the Small Faces “Grow Your Own”.

The final disc presented here consists of some alternative versions of the “Mulberry Bush” soundtrack tunes (which don’t actually differ that much from the officially released songs, apart from a Blues-tastic “Feel The Way”, but they are nice to have), some lovely unreleased BBC sessions and a live track recorded at the Empire Pool Wembley. With BBC sessions from the 60s you know pretty much what to expect, but that is not suggesting these are anything other than very good indeed. On the whole you get clear sounding, uncluttered versions of the songs, good performances and a fair bit of the evocative voice of the great Brian Matthews too. You also receive “Mr Second Class” where they sound strident and confident, a brief interview with Davis himself, which glosses over the loss of the Winwood brothers but shows no real animosity and rollicking takes of “Taking Out Time” and “Mr Time Seller” (the second version here) amongst other delights.

Of course this boxset is put together with great care and affection for the artists in usual RPM style and this all makes for a lovely collection of a highly underrated outfit, at least by this stage of their development. The Spencer Davis Group of 67-69 vintage definitely deserved more. As well as providing us with a lot of memorable music, that possibly found itself just out of synch with the prevailing trends of the times, it also teaches us a valuable lesson on using your ears to decide on the merits of a band when changes occur rather than thinking “original line-up is always the best”.