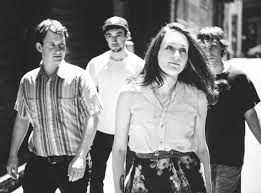 An alternative to the usual Valentine’s night entertainment, Steve Swift is startled by the excellence of Speedy Ortiz, Joanna Gruesome and Cowtown.

It’s Valentine’s night and I’m dragging my girlfriend to see three bands she’s never heard of, the words “trust me….” wearing a bit thin by the time we pull into the car park at the Brudenell Social Club in Leeds, our home away from home (I was here over 40 times in 2013). I’m quietly confident that the evening before us will be better than stuck in  a silent restaurant with 20 other couples running out of things to say between mouthfuls.

We love it here. It’s a brilliantly run venue that’s played a massive role in the burgeoning Leeds music scene. Bands just seem to want to play here, big bands as well. The likes of Midlake, Johnny Marr and Mark Lanegan have all pitched up, knowing they could probably sell more tickets at bigger venues than the 400 or so that add up to a sold out show.

It’s usually busy, whoever plays here – a passing trade of local students usually ensure that. And it’s just £7 for this three wayer, maybe the cheapest Valentine’s night since we stayed in a couple of years ago.

Cowtown are at the centre of the lively local music scene. Nash the guitarist and vocalist is the drummer in Hookworms, who are probably the best band to come out of Leeds since Gang Of Four (I thought carefully before writing that)  and Cowtown’s album – Dudes vs Bad Dudes – was one of my favourites of last year. “Dynamic, over stimulated indie rock” just about covers  it and their set tonight is typically rambunctious. I saw them support Thee Oh Sees a while back and they have their propulsion, the way in which a guitar figure will emerge and then build and build until it overwhelms the song. Just when you expect the circular rhythms to be broken, up it goes to another level of energy. They do syncopation as well – this is no frenzied thrash and the tunes are deceptively clever, even if they are generally over in a 3 minute rush.  It’s a typically heady set.

Unlike Cowtown, I haven’t heard a single note before tonight by Joanna Gruesome. After this set I doubt if I – or anyone else – will have the choice as they seem ready to ascend a few notches in the public’s pop consciousness. I can’t help wondering how the real Joanna (Newsom) will feel about all that, given her reputation for delicate, gossamer-like harping. Gruesome themselves are a formidable five-piece proposition, aggressive and thrashy with singer Alanna McArdle spanning the octaves from guttural roar to delicate indie-pop  melody. They are  a wonderfully pugnacious outfit, clearly determined to stop the likes of me from finding  convenient adjectives with which to pigeon-hole. I shall put the Thesaurus away, see them soon and you’ll understand what I’m on about.

Headliners Speedy Ortiz arrive for this first UK tour with an Atlantic swell behind them and I’ve heard good things about their first show in Birmingham the previous night. From Massachusetts, they’ve just released the Real Hair EP, 13 minutes of meticulously assembled music that hints at a live power I’m keen to witness. Songwriter, singer and guitarist Sadie Dupuis is writing some of the keenest lyrics I’ve heard for some time and wearing her influences boldly (Helium, Sleater-Kinney, Pavement).

Tonight, she takes charge without looking like she’s trying, displaying an inner calmness which only seeks to highlight the weight and energy of the band playing behind her. Each song seems to coalesce around an addictively punchy chorus and there is a wall of distorted guitar which regularly gives way to the most intricate, off centre guitar lines that make it difficult to absorb in that moment.

At one point we seem to be the only people in the shoulder to shoulder crowd who aren’t singing along to No Below (from 2013’s Major Arcana). American Horror (from Real Hair) and Basketball (from the Sports EP) disappear in a maelstrom of drums and guitars but the control is still retained. This is a band rehearsed to the hilt and which means business. The potential is frightening.

Predictably, it’s been a great gig and my girlfriend has a new favourite band (Speedy). The Brudenell has delivered again, with not a candle or a bunch of roses in sight.

All words by Steve Swift whose Louder Than War author’s archive is here and who can be found on Twitter.