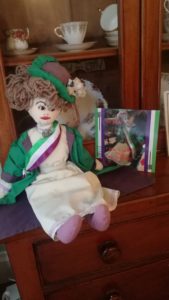 Manchester’s The Speed of Sound have been crafting their genre-melting underground alternative sound (New Wave post-punk blood powered by the heartbeat of 60’s influences) for nearly thirty years now, a time-frame which may have seen progression for women but, as they themselves seek to address with this latest release, we have a long way to go. Their new double A-side single “I’m Real/I Don’t Want Your Attention,” has been created to mark the 100th anniversary of suffrage for women, whilst addressing the issues facing women in the modern world. Recorded at the VoltaLab in Rochdale (previously The Cargo, a legendary studio with an impressive post-punk history), the video was filmed in the parlour of Emmeline Pankhurst’s old home, now the Pankhurst Centre (all profits from this release also go to the Pankhurst Centre and Manchester Womens’ Aid, and have drawn heavy influence from sources like Charlotte Newsom’s “Women Like You,” exhibition (pictured).) As ever, John Armstrong has also shown that he really knows how to craft an ear-grabbing melody with both of these songs. “I Don’t Want Your Attention,” sees vocalist Anne-Marie Crowley singing in a fashion both despondent and defiant about sexual harassment in the workplace, whereas “I’m Real” deals with the brutal subject of a possessive relationship. The language used as Crowley tries to articulate all the doll-like things that she isn’t reinforces the problems of the traditionally feminine whilst kicking against them. Both songs have a jangly indie feel which to a casual listener has a sense of optimism: the perfect hook to grab attention before pulling in the listener with the hard-hitting issues at hand. Speed of Sound clearly want us to reconsider the wider representations of women – in history, in social politics, in modern homes and workplaces, and yes, with the music industry – in a fashion that is accessible and far-reaching. Their long-term DIY spirit is full of anti-conventions and the way industry women should be portrayed is another part of that. The objectification of women in popular music, they claim, is part of the problem.

“I Don’t Want Your Attention” and “I’m Real,” are both excellent, melodic indie records. But it is the bold and defiant way that they tackle what the band see as a lack of social progression which means everyone really ought to sit up and take notice of what The Speed of Sound have to say.

All words by Amy Britton. Find more on her archive www.louderthanwar.com/author/amy-britton or via Twitter as @amyjaybritton. The Speed of Sound can be found on Twitter as @SpeedofSoundUK