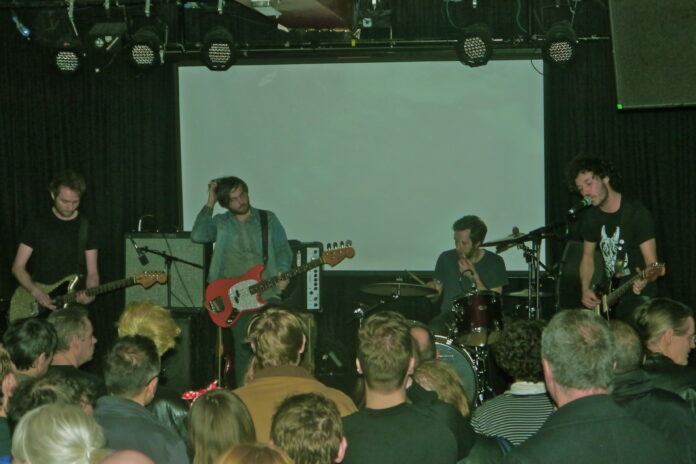 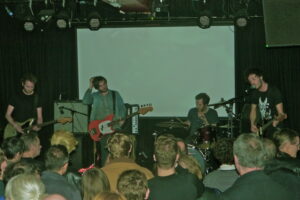 While most bands count themselves lucky if they get the chance to soundtrack a film, Spectres subvert convention by filmtracking their sound instead. If that close-up of a man placing and holding a dead fly on his tongue in their most recent promo vid left you with some perverse desire for more, Spectres’ live show is the place to be.

Throughout, innocent enough yet creepy footage of giggling infants (as well as an extended version of said close-up), projected in black and white, serves as the only lighting on stage. It makes for a sinister yet oddly cinematic experience, where at least twice the sensory stimulation you’re prepared for leaves you confused as to where you should focus your attention.

Reviews for debut album Dying expressed near-universal praise when it was released last month, with a curve ball exception from our own Phillip Allen, quipping that “if you’re wearing your influences on your sleeve then you’d better not be wearing a shirt that’s from Primark.” 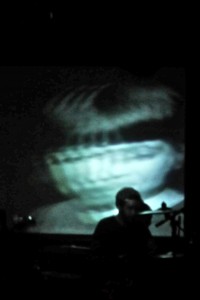 In literal terms, tonight it seems they’ve once again failed to attain the Allen standard. To label their attire with the P-word would be underestimating them (we’re talking Urban Outfitters sale at the very least), but for a band clearly wanting to engage their audience visually as much as sonically, they don’t seem at all fussed about dressing the part. Sleeves over substance they are not, and that’s probably for the best, especially when the substance is this good.

Personally, I’ve found listening to Dying not entirely unlike watching a documentary about the Nazis or 9/11; not because of any similarity in content, but because there’s a weird cleansing sensation that can be gained from both. Coming face-to-face with the harrowing footage, photographs and eyewitness accounts of such atrocities, so long as it doesn’t leave you suicidal, can conversely make you feel as if almost nothing could ever bring you down again. The only catch is that you have to switch off More 4 and go to bed before the cycle starts to repeat.

Enduring Spectres’ sustained aural assault on said album gives much the same feeling of optimism, albeit via a certain amount of distress, and they deliver roughly the same thing here tonight. Guitarist Adrian Dutt puts it best in the most recent issue of Crack Magazine, saying, “we want to push people out of their comfort zones. They might hate it, they might find it horrifying… We want people to question themselves, to think, ‘what am I feeling?’”

Inevitably, it’s a question not everybody here tonight seems willing to ask themselves. A few baffled faces make an exit during the Valentines-esque ‘Holocaust section’ of set closer Sea Of Trees, played out for far longer than on record and with eye-watering intensity, but for the most part Spectres’ audience appear ready to take whatever comfort zone detour is thrown at them. In an age where Mumford & Sons sit atop the Reading and Leeds’ bill, and at least 95% of club flyers bear the words ‘commercial floor-fillers’ or similar, it’s reassuring to know they exist.