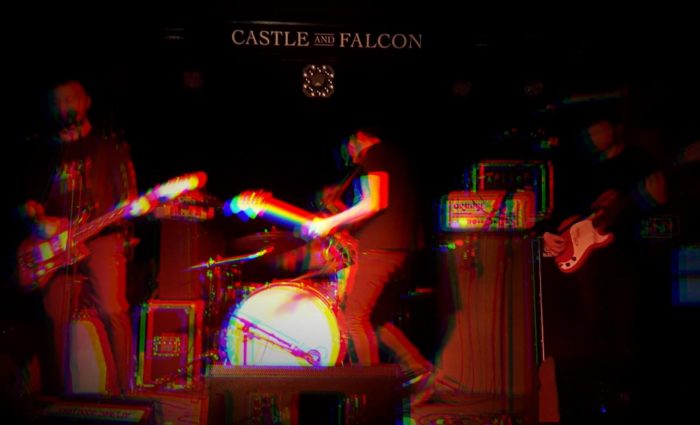 Bristol noise merchants Spectres bring gloom, beauty and tinnitus to Birmingham. Christopher Lloyd’s inner masochist was there to take the aural beating for Louder Than War.

If it’s done correctly there is a certain beauty in dissonance and volume that can have a truly paradoxical effect upon the listener, for the very nature of noise itself can influence a state of serenity. To achieve this though, it has to be done correctly. Any old band can make a loud racket, to turn the volume nobs up to eleven as it were, but it takes a certain skill set to make the kind of noise that transcends shock value and becomes something much more cathartic and joyous.

With only two albums and a handful of singles under their belt to date, Spectres have already mastered that skill set. The band are here tonight in a support slot capacity, hand chosen by A Place To Bury Strangers, and it’s fair to say that it is a set that was in every way as immersive and sonically all-encompassing as that of the headliners.

As the first strains of guitar envelop the initially small but inquisitive audience, the wall of sound increases, and gets considerably deeper, as does the audience size in a somewhat act of symbiosis. People tentatively approach the auditorium from the back room bar as the band hit their stride and the sonics kick into gear, and by the time their on their second track the room is full.

Whilst the dual guitars create their maelstrom of sheer noise, there are some seriously groove-laden basslines sliding away underneath, which really come to the fore mid-set on the tracks This Purgatory and the Sink, both taken from the 2015 debut album Dying.

Being as Spectres are here in support band capacity, they play a short set, which draws to a close with the latest single, the brilliantly titled Choucoune Asphyxiate Repeat. At just over two minutes long it is a surprisingly short track for Spectres, and one which in a live setting proves to be an absolute monster of a song, taking the furious stabbing guitars, the jack-hammer drumming and the droning vocals of the single and transmogrifying it into an amazing blast of nasty sonic fury that exemplifies why the headlining act were so clearly intent on having Spectres come out and act as their tour support.

With a third album currently in the early stages, there should be enough time to give the old eardrums enough rest for them to contend with the next time Spectres bring their awesome sounds out on the road.

You can check out Spectres at their official Bandcamp and Facebook pages.