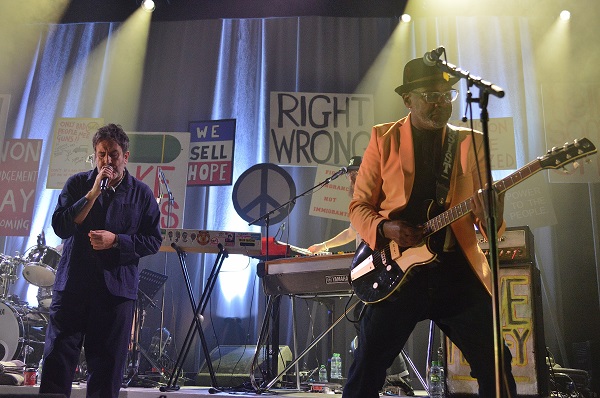 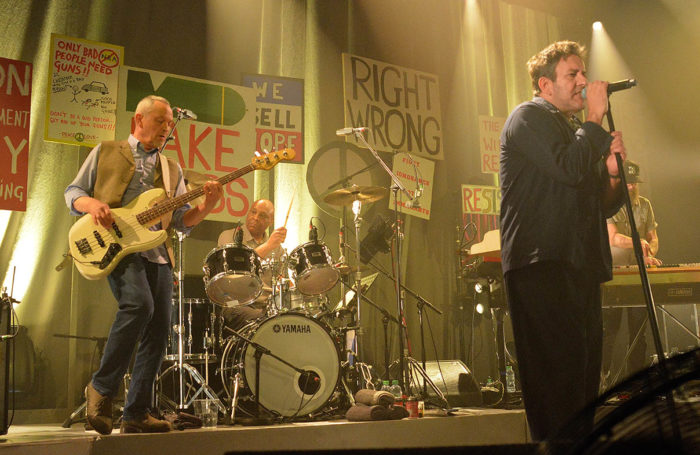 Back in the late 70’s / early 80’s I was too young to go to gigs. So to actually get to see them reform with three founder members and release what will be one of the albums of the year – review here:  A 40th Anniversary tour is a revelation for me. I crack on to the Academy with a bunch of like minded old mods and punks for a night to remember….

The venue is packing up and it’s good to see quite a turn out for the support band The Tuts. These three strong multi cultural women give us a set of ska’d up stompers that kick ass and get the mood going. One of their songs touches on a subject that is close to me at the moment, about how they’ve gone against all the odds of using PR and management, and doing it on their own. Their statement of “Fuck you! We’re now supporting The Specials” says it all. A nice set from a promising band with DIY ethics who are setting an example to all new bands out there thinking of giving up. Before The Specials hit the stage we get a proper old skool reggae DJ set from special guest Saffiya Khan, proper head nodding stuff and the smell of weed is already hitting the air…. 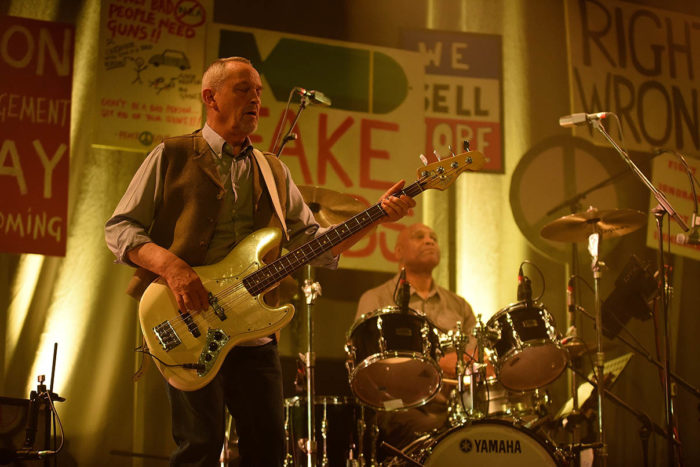 I’ve been waiting for this night since 1981. Even though we’re missing the greatness of Jerry Dammers, Roddy Radiation and Neville Staple I’m stunned by this set. They come on stage to the chants of ‘Rude Boys’ from the full capacity crowd and the excitement is spine chilling. A quickfire shotgun attack of three classics Man At C&A, Rat Race and Do Nothing just blow me away in the first fuckin 10 minutes!! It’s like they’ve never been away and the people around me sing every word back at Terry Hall. The slogans that be-deck the rear of the stage are fitting with the lyrical contents of the new album which is what The Specials did and still do best. Vote Me For sounds great live and Steve Craddock from Ocean Colour Scene fill that gap backed by the ska drum skills of Kenrick Rowe.

The whole set is mixed up perfectly. One minute you get Friday Night, Saturday Morning which takes me back in time to when I was singing back to my radio in my tiny bedroom back in the day. I still remember it word for word! Embarrassed By You is another great one live, and couldn’t be released at a more important time with all these knife crime incidents popping up daily. It’s a shame these kind of people probably won’t listen to this message. They throw in a few covers which you’d expect including Blam Blam Fever and the obligatory A Message To You Rudy, a live staple now(apologies Neville!).

There are many highlights to mention as the night is pure nostalgic and the new tunes just work perfectly with the old. But when Saffiya Khan hits the stage and 10 Commandments kicks in it’s fuckin ace. Pure ska dub with loads of echoing sound effects and seering keyboards all adding to Saffiya’s commandments which come across strong with a message to all of us witnessing. They throw a couple more gems in including THE HIT Concrete Jungle, Gangsters, Sterotype and a fuckin great Too Much Too Young which gets us all skankin like bastards. Another highlight for me is when Terry addresses the fans with “And you all know none of us want fuckin Liverpool to win the league then?” to mass applause.

The fairground like Breaking Point is the encore and I’ve heard that they’ve not been doing Ghost Town on this tour….. What do they do? Ghost Town! And it still sounds as haunting and prophetic as it did in 81. I’m in heaven here now and probably just witnessed one of the gigs of the year. I could have watched them when they last reformed but it wouldn’t have felt right and I listened too much to the purists about them not being the true band. Fuck that. They have released a belting new album, they blew me away tonight, and the remaining members joined by new are definitely Special to me. Welcome back!

More work by Steve Hampson can be viewed on his website here and on Twitter where he tweets as @rangerpeg. Please note: Use of these images in any form without permission is not permitted.