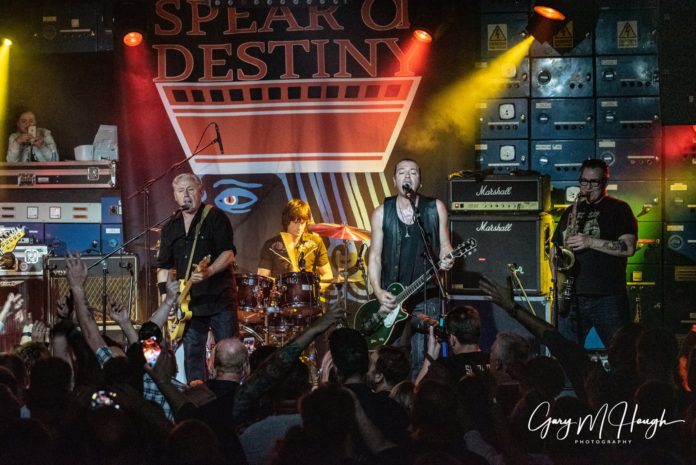 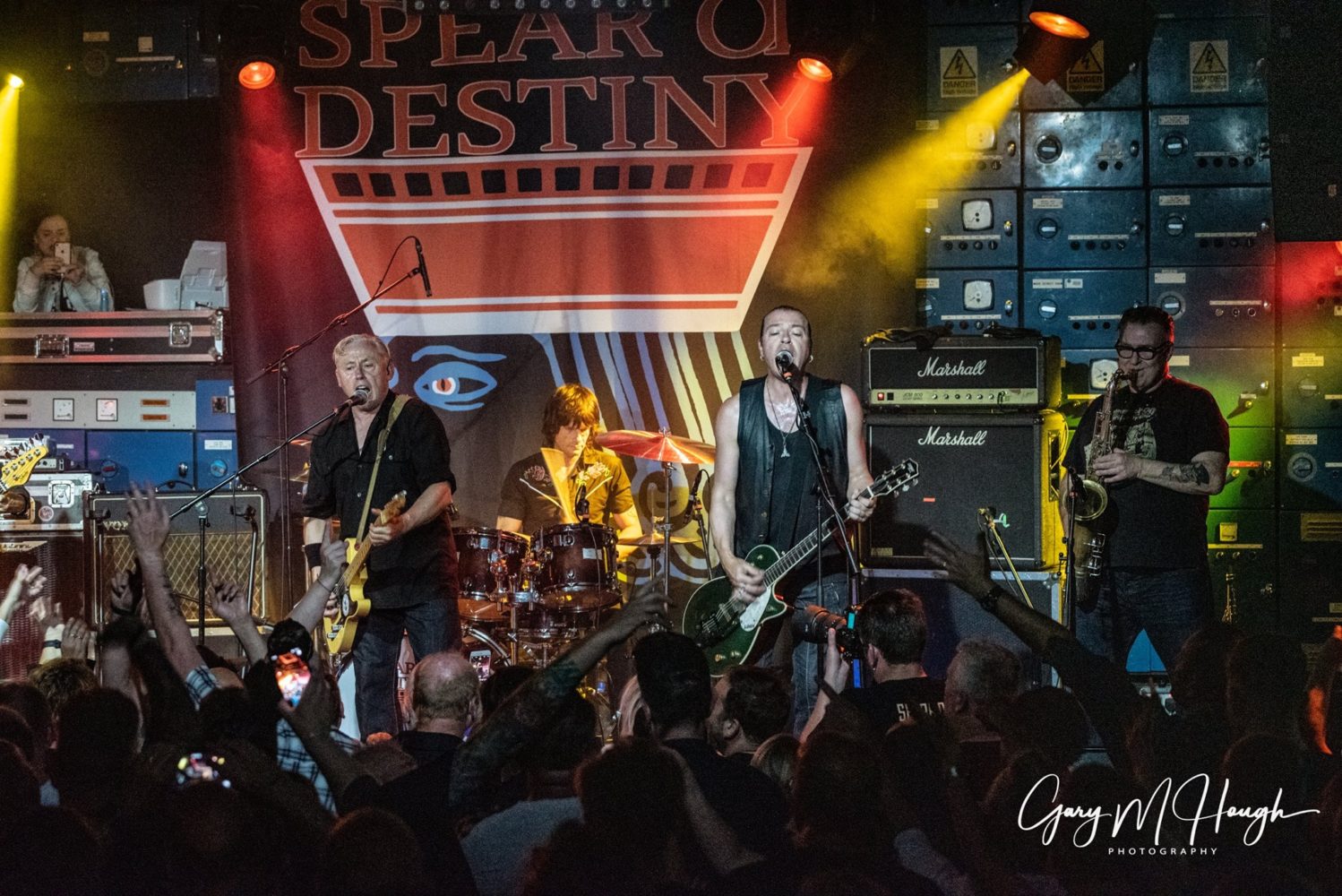 Spear Of Destiny celebrate 35 years of One Eyed Jacks with a life affirming set at Gorilla, Manchester.

“One Eyed Jacks” released back in 1984 was the second album from Spear Of Destiny, and earned the band two UK chart placings, ‘Prisoner Of Love’ peaked at #59 in January of that year, whilst ‘Liberator’ stalled at #67 some three months later.

The album itself was a turning point for the band, barring ‘Playground Of The Rich’, ‘These Days Are Gone’ and ‘Prisoner of Love’ the album had been part of the live of the original band line-up. The final recording however was of much more panoramic proportions, and arguably came to define the bands grandiose sound, and to mark a clear definition between Theatre Of Hateand Spear Of Destiny.

Tonight, in front of a sold-out crowd Spear Of Destiny fully realised that sound in the live arena.

Brandon in a black shirt, sleeves rolled looks uncharacteristically nervous; he is flanked by a black clad Craig Adams, and Adrian Portas, as ever in a sleeveless waistcoat; Brandon momentarily turns his back to the crowd, his eyes dart between Adams, Portas ahead of the familiar opening chord and the rallying yelp as Brandon turns back to the audience who immediately ignite into a clattering mosh pit, the sound is precise, crystal clear allowing the song to roar, as the brass burns through.

‘All You Young Men’ is frankly just huge, Adams bass holding everything in place, Brandon’s voice despite a life on the road soars as ever, the crowd, arms aloft returning every lyric. ‘Everything You Ever Wanted’ and the melancholic ‘Don’t Turn Away’ provide a welcome break, time for the crowd to draw a heated breath in a venue that is already resembling a sauna. 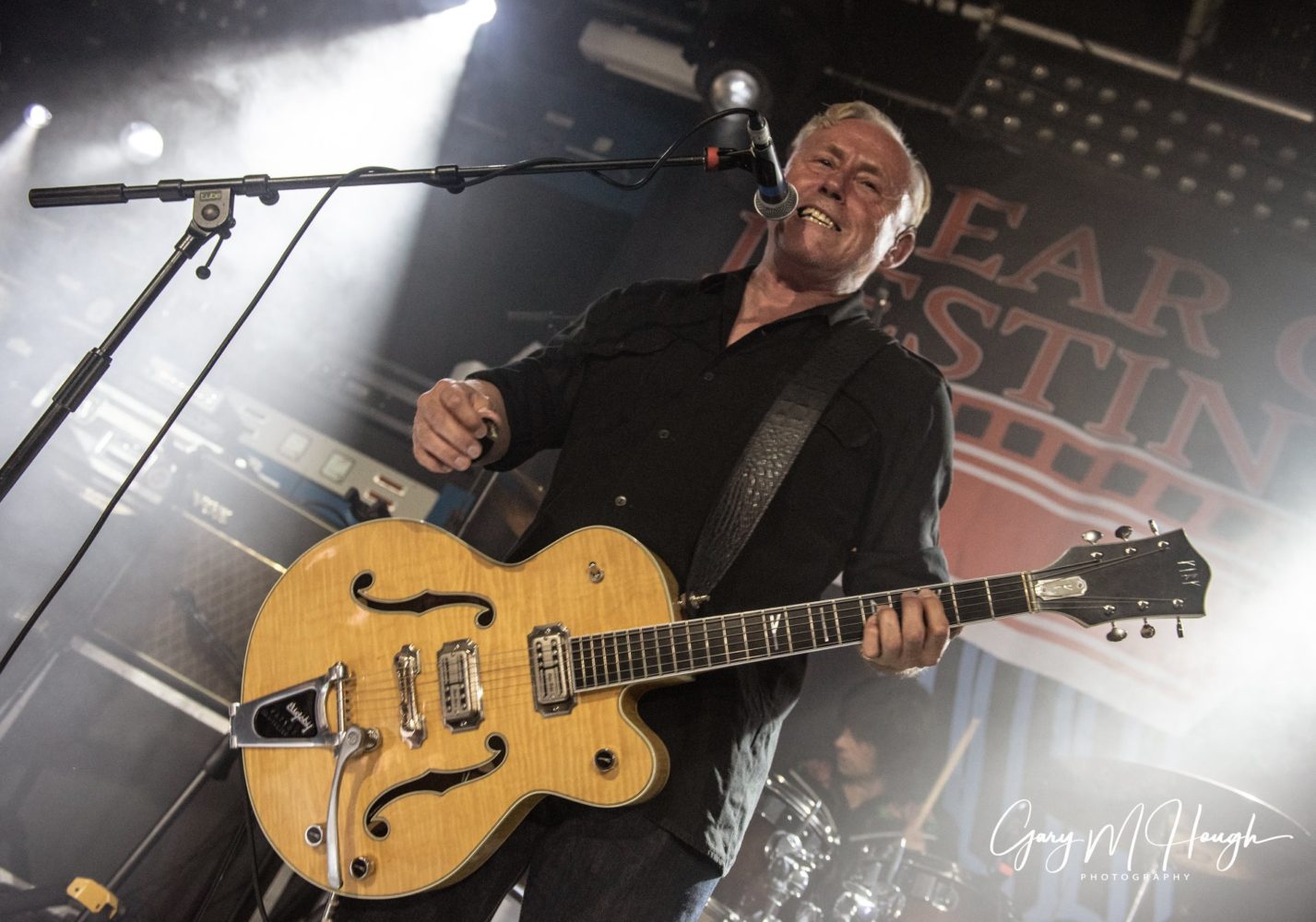 By now Brandon looks to have shrugged of his apprehension, a smile has appeared, he looks to his bandmates who nod their approval ahead of the anthemic ‘Liberator’… Spear Of Destiny are playing with a genuine burning passion, these songs may well be 35 years old, tonight though they are burning with rare intensity; the shimmering keys of ‘Playground Of The Rich’ perfectly compliment the warmth of the brass.

‘Attica’ like much of early Spear Of Destiny’s catalogue is a simple piece of music, the key though is that it is a great song, its effective, and here in front of an appreciative audience Brandon’s material delivers in spades.

‘These Days Are Gone’ is underpinned by a cavernous bass, Brandon tilts his head forward then lets his voice loose, whilst Clive Osbourne switches to a Soprano saxophone for a for a genuinely breath taking and heart tugging refrain, the emotion within these tracks washing out over the audience.

The set ends non-chronologically with ‘Grapes Of Wrath’, the title track from the debut album, we can forgive this minor timeline lapse as we are treated to one of the finest bass lines ever which propels the track to its searing conclusion, Brandon’s voice repeatedly swirls “Give us back our land” before departing the stage.

They return minutes later with ‘Land Of Shame’ which I still reckon has a guitar line half inched from The Cockney Rejects ‘Bad-Man’, before fast forwarding to ‘Medievalists’ from the 2018 Tontine album.

The sweat drenched crowd might be flagging however ‘The Wheel’ is the rallying call to fuel the fire that threatens to raise the venue roof, thought that accolade surely goes to ‘World Service’ – perhaps Spear Of Destiny’s finest hour, here tonight this was phenomenal, a real spine tingling moment, an entire audience moving, singing as one huge body; Brandon the conductor encouraging us, pushing us ever on; then out of the blue Brandon launches himself headlong into the crowd, he is raised up, a sea of arms as he crowd surfs whilst trying to complete the lyric, before being brought back to the stage to close the set.

This was something very special, a night to treasure; I’ve seen Spear Of Destiny countless times over the years, and this was without doubt their finest performance. Everything just gelled, it became a night of celebration, Spear Of Destiny were untouchable; and if it were needed – a reminder of just how important this band remain.