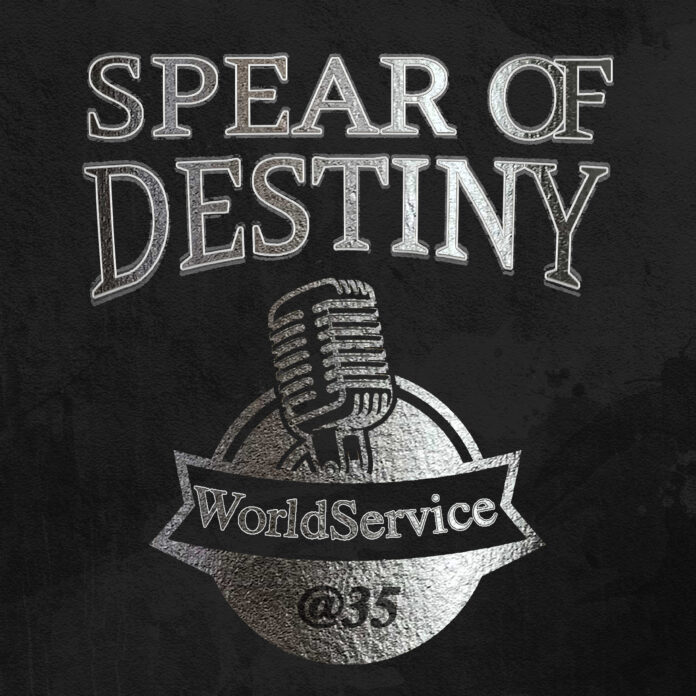 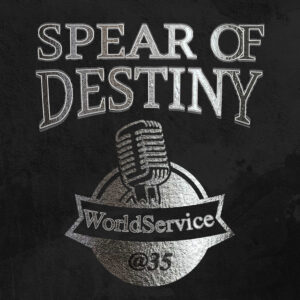 I guess it would be fair to say that “World Service” has had a troubled history.

Initially released in August 1985 via Epic Records, with production from Rusty Egan who at that time was rightfully considered to have the ‘golden touch’. Initially being a member of the Rich Kids, he went on perform with Skids and most notably Visage.

In addition he was the DJ at the infamous Blitz club, the London venue that arguably birthed the New Romantic movement – this was handy as he owned his own record shop, The Cage situated on the Kings Road… dance to the new music he played, buy it at his shop – neat! He and Steve Strange later opened the Camden Palace which became the premier nightclub sound tracked by various new romantics and other electronic outfits. Egan had clearly proven his mettle as a DJ, and then took up the task of producing and arranging, with early successes from The Twilight Zone, and Visage.

1985, Enter Kirk Brandon and Spear Of Destiny complete with their follow up to the previous years “One Eyed Jacks” an album that sailed into the UK Top 20, and resulted in two Top 75 Single entries, “Prisoner Of Love” peaking at #59, whilst the rousing “Liberator” inexplicably stalled at #67. As such it’s reasonable to suggest that both Brandon and Epic Records were expecting grand things of such a pairing; though whether both parties had the same aims is questionable.

Sadly, the finished product did not match the sum of its parts, the songs are there – somewhere, buried deep in the mid 80’s electronic blur. It would be unfair to heap blame upon Rusty Egan, he was brought in due to his obvious talents, and I’d be as bold to suggest that he completed the brief… it’s just that he didn’t seem to understand the vitality inherent in Spear Of Destiny. “World Service” was a pop/rock album when the reverse would have been infinitely superior.

Despite this the album immediately entered the UK Chart climbing to a peak position at #11 and spawned two Top 75 singles.

Over the preceding 35 years Kirk Brandon hasn’t been shy to express his disappointment in the sound of the album, a subsequent reissue with the added bonus of ‘The Berlin Sessions’ hinted that there was more to the material, and should you get chance to see Spear Of Destiny live you will well know that in that environment “World Service” burns brightly.

As such when the opportunity arose to re-work the album Brandon rose to the challenge!

The first difference being the running order, “World Service” a track many consider to be the bands finest moment opens proceedings. I was able to speak to Kirk Brandon about this shuffling of the material who described the entire recording as “An organic thing as we recorded it” before adding “Hoping it gives people the lift that it gives me”.

The track literally sparkles, the delicately nuanced piano motif leading us in, Brandon’s distinct voice, a voice that has matured yet retained all its strength, as he soars into “I hear music” a cacophony of crashing drums and guitars join the fray, a joyous celebration of a band at the top of their game; the track has real energy, a sense of vitality enhanced by the elegant production as it ascends on that meaty sax.

Similarly with “Cole Younger” the excess flourishes have been stripped away allowing the song to stand on its own merits, by removing the bombast associated with the original release the song has filled its widescreen potential, the guitars punch in all the right places, Brandon sings with the experience of a seasoned performer.

“I Can See” now has real bite, that opening guitar riff is savage, perfectly complimenting the huge drum sound as the song is propelled along by electric piano as opposed to the messy squelchy synths of the original.

“Come Back” retains its reggae vibe though it is much more subtle, its far from my preferred track, the essence of the song structure is entrenched in the mid-80’s, yet this new recording has added a certain liveliness from which it benefits; similarly original opener “Rocket Ship” – another track bogged down in 80’s sheen, once again that gloss has been dispensed with, the track retains its mid-pace tempo, yet the guitars have been (rightly) turned up, so what we now get is an anthemic sax led rabble rouser perfect for the chorus of “We’re nothing special, nothing at all / I want to love you, my whole life through”.

“Mikey” (stemming from Brandon’s observations of the Falklands conflict) has been re-worked with a tin whistle, providing an Irish tinged, more personal, introspective review.
“Once In Her Lifetime” always seemed to have been better suited to the earlier ‘Grapes Of Wrath’ album, though was smothered with a difficult pop production, here it reaches back and literally shakes of its shackles, as does ‘Harlan County’ which by dispensing with its original polished to within an inch of its life production has revealed both its fragility and its emotion, the lyric “the working class have got their pubs and TV” has been brought up to date as “…their Facebook and TV”.

“All My Love” was lifted as a single upon the albums release, I always considered this to be a less satisfying choice; particularly when you have the beauty of “World Service” primed ready to go; yet someone at Epic thought this had Top 20 stamped on it and paid for a glitzy pop video complete with a trio of over-permed models in white stiletto’s offering backing vocals – the new version remains a pop song, albeit one with a much more palatable harder edge.

The inclusion of “Young Men” surprised me, not least as it was originally released on the sophomore “One Eyed Jacks” album, but the fact it has been entirely reimagined as a beautiful piano and vocal lament, the arms aloft grandeur of the original has become a haunting expression of grief.

Spear Of Destiny should (now) be proud of “World Service” – by finessing the power of his band; essentially adding the required grunt, they have allowed the album to finally glisten, and rightfully assert its position within the band’s canon.