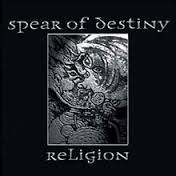 The reissue of 1997 album by Kirk Brandon and Co. LTW’s Ian Canty hears a re-energised version of Spear Of Destiny 14 years into their career.

By the time that this album was released, Spear Of Destiny had undergone such radical line up changes that most people would tend to view them as pretty much a Kirk Brandon solo project. 14 years had passed since they formed, following the split of Theatre Of Hate when that combo seemed on the verge on major success. Happily this dovetailed with the formation of Spear Of Destiny, who went on to turn this potential in to hits (Never Take Me Alive being the biggest, reaching the Top Twenty in 1987). However, the turn of the decade and changing fashions resulted in downturn in their fortunes.

Without wanting to bring up things best left in the past, the mid-90s were troubled times for Kirk, and the album Religion would be the first step he would take in putting all that behind him. It was the first SOD album in 6 years and seventh overall. The stripped-down band now featured Art Smith (drums), John McNutt (guitar) and Mark Celvallos (bass), alongside Kirk himself supplying guitar and vocals, and he would also co-produce this LP.

Ah production. Thankfully by the middle of the 90s we had moved well away from the gimmick-laden 80s, which gutted the power any singer or band possessed given half a chance and replaced it with a horrible brittleness. Subsequently Religion has a pleasing clarity and solidity to it’s sonic punch. Kirk is in good form with that one-of-a-kind voice prominent and the newcomers in the band more than able players. Together they feel like a coherent unit and they come flying out of the blocks on the first track Rainy Day, simple but powerful in classic Spear style. This, along with the following, more gentle Iona, gets the album off to a fine start.

Prison Planet is a really good, driving tune that sums up all that’s good in SOD’s sound – also this one is a textbook example of their slightly paranoid worldview, where the freedoms of the past are slowly dissipated in the march for “progress”. In contrast, the short, acoustic Magic Eye dips its toe in the folk and Celtic influences that Spear had always tended to employ. The anthemic Mile In My Shoes is more personal and sounds like it’s really from Kirk’s heart in this dark time for him: understandably very bitter and warning anyone in judgement to “Walk a mile in my shoes, then you’ll feel how it is to lose”.

The descending groove of X, with its slow intro and coda, is very attractive and on the sombre Female Hero (7 Letters) we find SOD at their most touching, with Kirk’s vulnerable and heartfelt vocal performance being both raw and moving. Equally downbeat is Werewolve, though SOD and TOH had definitely dabbled in Goth areas, this is more to do personal issues despite the imagery used.

On this record Spear Of Destiny sit poised between Post Punk and stadium style rock in the Cult mode (especially on Slayride) with big choruses and riffs to the fore. The crunching, malevolent sounding Total Kontrol brings ends things to an end in noisy and ecstatic style with Kirk bewailing being “a stranger in my own land” in 1999 (I wonder what he makes of 2017?). Harsh and uncompromising, there’s hints of his Theatre Of Hate and Pack days in this one.

Religion is a very good album considering Spear Of Destiny were so far into their career and given the surrounding troubles. Kudos to Kirk for being able to put aside all the strife that beset him at the time and come up with something that put Spear Of Destiny back in the record buying public’s eye.

This reissue is a straight re-release with no bonus tracks or sleeve note insights (though you do have a print of the lyrics in the inner of this digi-pak) to induce hard-core SOD/Kirk fans to part with their cash for it again. I would have thought people coming new to Brandon’s oeuvre would probably plump for a best of SOD in the first instance. I suppose this CD would appeal mainly to any more casual Spear fan who has a few gaps in their collection they wish to fill. Bit of a missed opportunity really, as the LP itself is highly listenable, well played and with a few extra adornments could have presented itself as a highly attractive package. A little bit of digging around for some added enticements could have made all the difference.