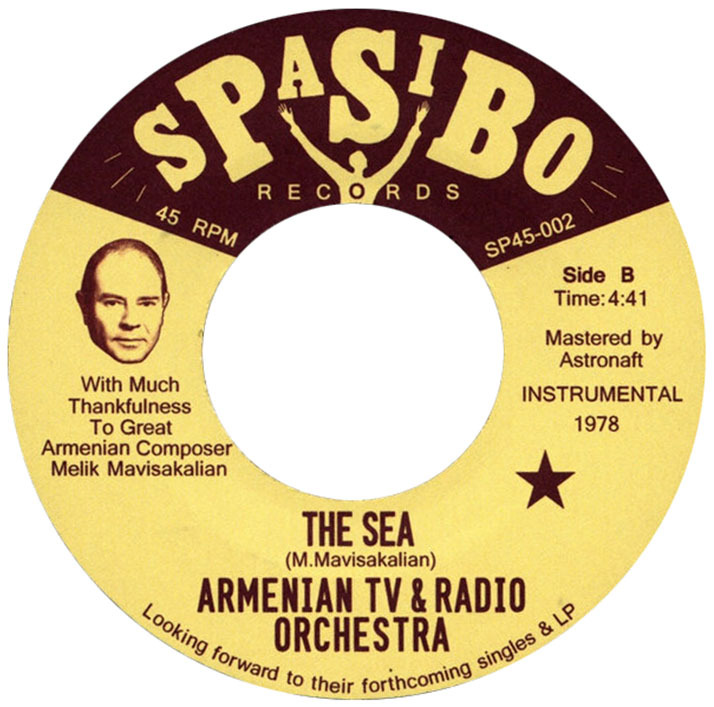 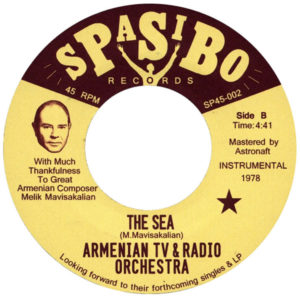 In the light of the recent Library Music Film and associated releases Russian label Spasibo Records have been releasing rare, limited edition funk, soul and library music 7” vinyl of to a rapturous audience, all releases so far are selling out faster than you place a needle on record. Matt Mead chats to DJ Baz, the head of Spasibo exclusively for Louder Than War.

Baz: There were not so much music in my childhood, my parent’s record collection was just about 20 records and it was soviet pop and some symphonic music. They were more into cassettes in 80s and my dad’s tapes still on a shelf, but they did get into The Beatles and Russian 80s rock. Both of my parents could play guitar and sing to me to me and my brother, some songs were lullabies. The rest of the music I heard came from the cartoons, radio and kids records (i think with brother also had about 20 records).

Funny thing about soviet radio – in every apartment in big cities of soviet union was a wire radio – it was made in case of a possible nuclear war to connect the government with the people because radio waves don’t work after nuclear blow. But God bless this wire radio was used only to listen to a cosy radio station Mayak (it means lighthouse). In a lot of apartments this radio was turned on 24/7, it imitates that someone always at home, as in crazy 90s with all those robberies it was useful!

So i remember there were some radio-spectacles and audio-books at this radio, but nothing which was so remarkable. Father’s tapes also wasn’t remarkable. 2 most remarkable musical impressions i got from 2 fairy tales: First is this cartoon about soviet cosmic adventures of small girl Alisa. Also there were about 10 books about her – have read them all, maybe because of sci-fi i love to read! I hope someday modern funk bands will cover all tunes from it! Heeey, it’s a good idea! Give us some time to make it possible! This music is one and only cosmic soviet groove i know! And It’s awesome!

The second and biggest impression on me was from this children’s record, there are some good moments on it but i remember these details the most. It’s a fairy-tale about boy and girl , 2 soviet pioneers who entered a fairy world and save the princess while helped by some characters to defeat evil hero Immortal Kaschey and his Wild Guitars! The Boy believes in science, but the girl believes in magic and kindness , so with this yin and yang they teach everyone who listen to this record. I still love this story and i sampled everything from this LP!

In the cartoon and on this record the music is awesome, it’s a shame that authors didn’t archive the instrumentals of it. We still try to dig for some TV/radio music, which was never released on vinyl. I hope someday we’ll get to access to the holy grail. Archive of soviet TV and radio!

Digging and DJing influences were J-Rocc and Beat Junkies, Egon and early Stones Throw, Malcolm Catto and Jazzman with their compilations, Cut Chemist & Shadow with their historical mixes, Keb Darge with his label and dances, DJ Format with his albums and mixes, Young Einstein with his instrumentals for UD, Shawn Lee with his Ape Breaks! And guys from Russia – Dj Chak, Dj Skotch, DJ 108 to name a few.

Also I should name Miles Tacket and the Breakstra, Lance Ferguson and the Bamboos / Cooking on 3 burners, Gabe Roth and Dap-Kings, JJ and Bo with their Poets of Rhythm, Eddie Roberts and New Mastersounds, Jukka, Didier and whole Timmion, Daptone/Dunham/Big Crown, Legere, Ubiquity and Grandslam/Big Daddy and Wax Poetics magazines.

Also Funk45.com, Fryer-Mantis forum, Peter Werleminger and his Funk Lexicon and to everyone who still share the music and info on Discogs and YouTube! Later label’s influences were Funk Night and Mocambo, more later – Colemine records, also i like what 45live doing – all this live shows is great ideas! 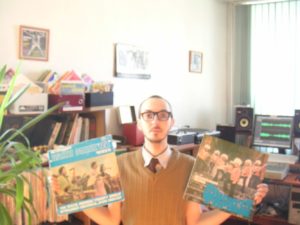 When did you first hear library music?

I don’t remember the exact moment when i find this term maybe in Grandslam mag. I started to dig for Keith Mansfield records after hearing Soul Thing by Tony Newman on 45 in 2004-2005. Oh! I know when i heard library first time! In early 90s. This band was a Russian replica of 2 Live Crew. And after many years of USSR censorship it was first rap-songs on Russian TV and it was about sex! My friend had their LP and we would spin it 5 times a day!

What was it about library music that you liked?

At first i like the instrumental music, which is well arranged. This type of music were sampled in rap music which I listened to since 1995-6. So i like the music which sounds like instrumental hip-hop, but played by orchestra. I still don’t understand why i like rare groove music and not rock/metal/techno/house/etc.. Maybe it’s because of type of nervous system, i don’t know, but i like that funk rhythmic drum breaks instead of flat beat. For me library is like a symphonic hip-hop! Of course library music is much more than just rare groove, but I’m from this scene, so i just can tell you from my point of view. For me Beastie’s Boys “The In Sound From Way Out” is Library Music.

Did you start to collect library music records?

I really tried to collect the records but it was hard to dig for library here in Russia, i have some KPM, DW, BRULL, AMPHONIC, JW LPs but just a few. God bless now it’s possible to find to this music online.

You have been running a record label that is releasing library 7”. Why did you start to do this?

Hey it’s a rare music which would be nice to spin at dj-sets! We released just couple of really Library 45s which really was music from the movies, but of course almost everything is soundtracky stuff and more to come! 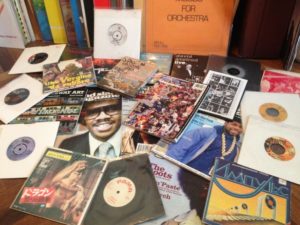 Can you go into some detail regarding the releases that you have released so far?

Of our library records i can name two, first – Murad Kazhlaev – “To See You”. This music is really from the movie used in video, but only vocal version was released on vinyl in USSR, so we found the composer and got a permission to release the instrumental! He’s super-friendly guy, but he told “oh, you mean that background music, i never was focused too much on it”. He’s much more into symphonic music, but he know what good groove is!

About second – I’m sure you’ve seen it! It was found and uploaded by DJ Chak – rare groove activist from St.Petersburg, and our friends The Soul Surfers made a cover-version. With their drummer Igor Zhukovsky we found that old drummer Vladimir Vasilkov and even the drum-set from the movie. Sadly Vladimir passed away, but we have in our archive 6 hours of his last interview, hopefully someday it will be released.

Are you planning any further releases?

Of course, about 10 releases planned for 2019, but now there are 2 fresh 45s that we have released. One is by Shawn Lee and The Soul Surfers. Another one is by our heroes – guys from Desco/Daptone family – Scone Cash Players, so there’re more good tunes for sure! https://spasiborecords.bandcamp.com/merch

Have you seen the forthcoming Library Music Film?

No. I am still waiting to see it! I remember I supported it via crowdfunding and still waiting for the secret link! Of course I’d be happy to visit the premiere with KPM show, but even a link would be dope! Great that they are going to release the DVD & LP. Will buy it for sure!

Finally, what’s on your turn table at present?

Actually I’ve been listening to old music for so many years, my eBay account was blocked because i couldn’t pay for everything i won (actually even 4 accounts!). I understood i can’t find and listen to every funk 7″ on the planet, that’s impossible yet. So i decided to stop and check soviet Melodiya records – there are just 40,000 releases and there were catalogues of all releases. So it’s possible to try to check all possible soviet rare groove records. The result is a few successful mixes with soviet groove you can check here at my Mixcloud page.

After finding almost every soviet holy grail LP i decide to check all modern rare groove music which was released after the crappy 80s. So now I’m deep into modern funk bands, from my point of view, the revival started in 1992 with Poets of Rhythm’s “Funky Train”, so now i try to check all funk 45s which were released from 92 to this day.

Last new records i bought was the LP by Shawn Lee and The Soul Surfers, Pat Van Dyke – “Hello Summer”, Brownout – “The fear of Brown planet”. The records which I’m waiting for at the post-office is an LP by Desco crew – “Funky Sitar Man”, I’ve finally been able to find a nice priced copy! The opening of the last autumn for me was unnoticed LP by Lance Ferguson – “Raw Material”. Also i like what J-Zone is doing now – that’s a great transformation from rapper to drummer! The freshest album i like to buy is the White Blinds LP. There are so much more modern bands and musicians I’d be happy to name.

To find out more details regarding future Spasibo releases visit their Instagrame page.