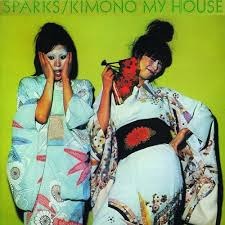 “As Yuletime approaches, we give you our tribute to every day of the year that doesn’t fallon the 25th of December. Thank God, It’s Not Christmas.” Russell Mael of Sparks

To coincide with Sparks’ shows in London – when they will perform their landmark 1974 release,Kimono My House, with the Heritage Orchestra – Universal Music announced the release of a limited double vinyl remastered version of the classic album.

The fifth track on side one of the original album is ‘Thank God It’s Not Christmas’. “One of the many highlights on the phenomenal Kimono My House, ‘Thank God It’s Not Christmas’ is the archetypal song from Sparks’ Island Records era. Adrian Fisher’s lead guitar and Ron Mael’s piano duel insistently with a prominent string section, as Russell Mael sings an alternately wry and depressing lyric about the desire to find activities that distract oneself from a slowly disintegrating relationship. The lyrics are truly magnificent, both in their literal meaning and the way they work with the music, creating a rhythmic counter-melody that echoes Fisher’s guitar line, and Muff Winwood’s crystal-clear production emphasizes the song’s soaring, anthemic elements; although ‘Amateur Hour’ and ‘This Town Ain’t Big Enough for Both of Us’ were the hits and ‘Here In Heaven’ is more beloved by fans, ‘Thank God It’s Not Christmas’ is possibly the album’s highest point.” Stewart Mason, AllMusic.com

The 40th anniversary edition 2-LP on heavyweight 180gm vinyl with download card, will include a second disc of seven previously unreleased 1973 demos from Sparks’ personal archives and will be released globally on December 15th and in North America on December 23rd 2014.

Kimono My House was released in May 1974, peaking at Number 4 the following month and spawning the keynote hit singles ‘This Town Ain’t Big Enough For Both Of Us’ and the equally superb ‘Amateur Hour.’ Critics were enraptured by its heady blend of glam oomph, music hall humour, prog texture, rock power, Germanic cabaret, bubblegum pop and showtune infectiousness. NME devoted a whole page to their thoughts on the album, hailing Russell’s “stratospheric blend of Marc Bolan and Tiny Tim”, Ron’s compositional inventiveness, the unusual time signatures and the band’s musical originality, and concluding that, compared to Bowie’s ‘Diamond Dogs, ‘Kimono’ was “the real breaththrough.”

Kimono My House is widely regarded as one of the finest Sparks LPs of their 23-album career. “It’s a record we definitely have fondness for, musically and lyrically,” Sparks’ vocalist Russell Mael says. “It gave us the opportunity to come to Britain, and it was so well received. It was a real special album, both commercially and critically, so it means a lot to us. We never like to get too nostalgic, it can be so paralysing, and we feel obligated to keep moving forward… But let’s just say that, without recreating it, every time we make an album it has to be the Kimono My House of now.”

What makes this package extra special is its second album: the first release anywhere of seven demo recordings Ron and Russell Mael made in 1973 prior to signing with Island Records. Although a handful of the tracks were later recorded by the band commercially, all seven have never seen the light of day and come from Sparks’ personal archive. This is a true goldmine for aSparks fan

“On June 19, 1973, after a few weeks of dabbling on borrowed acoustic guitars and piano, Ron and I recorded the demos that became the album you have in your hand” Russell Mael, 2014

Both albums have been mastered for vinyl by Bill Inglot, and are packaged in a thick-spined outer sleeve with original inner bag plus new notes from Russell Mael and an essay by Paul Lester.

1. This Town Ain’t Big Enough For Both Of Us

3. Falling In Love With Myself Again

7. Talent Is An Asset

1. When I Take The Field On Friday

5. A More Constructive Use Of Leisure Time

7. My Brains And Her Looks