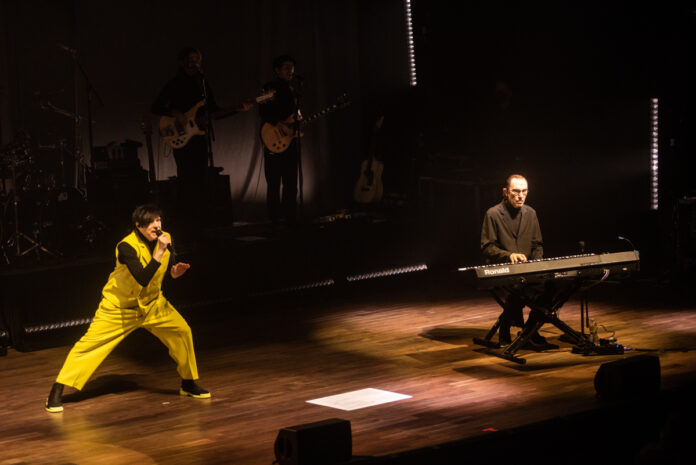 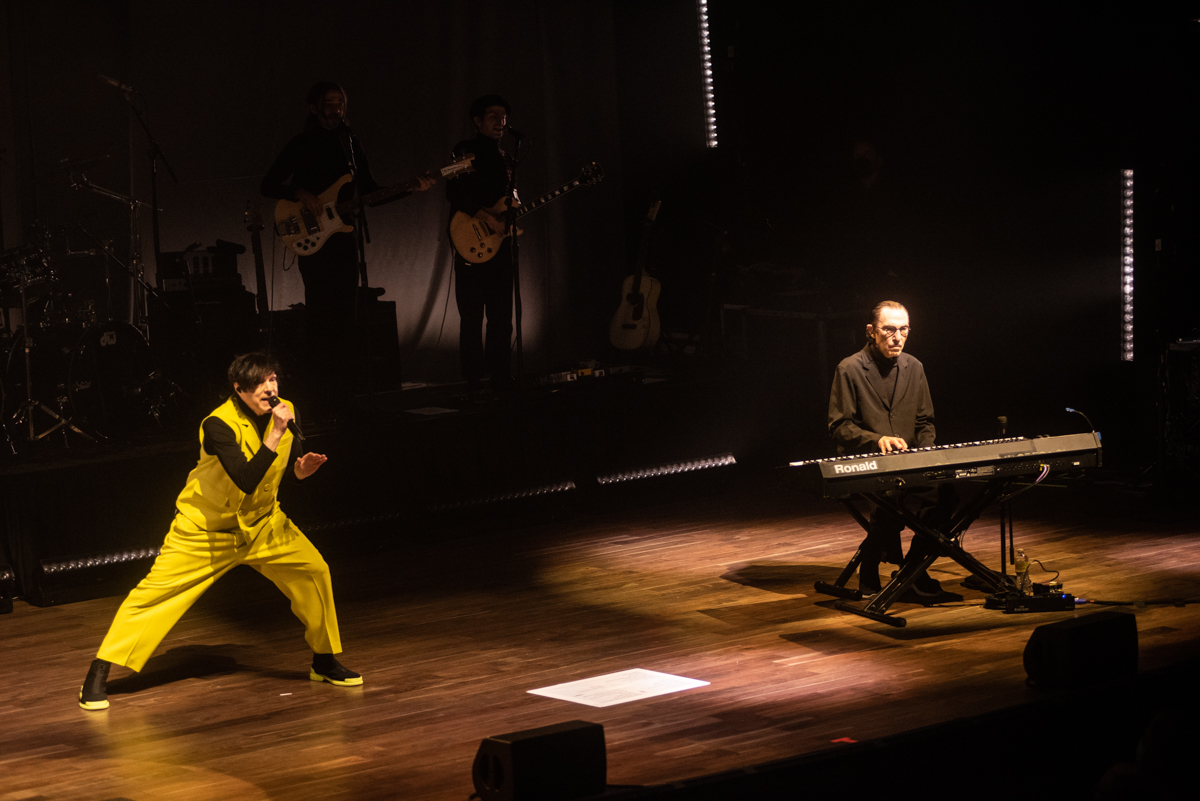 Sparks rolled into Manchester for the performance of their lives on Thursday night at The Albert hall. Nigel captures some of the excitement for Louder Than War.

Formed in 1971 as Halfnelson, Sparks’ first album, produced by Todd Rundgren was a flop. They persevered under the new name and the next album; A Woofer in Tweeter’s Clothing also flopped. Clearly Bearsville, their label, knew what they had on their hands, but the band couldn’t quite get the formula right. Everything changed in 1974 when, after relocating to the UK to ‘participate in the glam rock scene’ they had a European smash with this Town Ain’t Big Enough for The Both of Us. The US still didn’t get them and never would! The following album Kimono in My House, their breakthrough, and considered one of their best, hovered outside the US 100 but was a smash in the UK, spawning follow up hit, Amateur Hour.

That of course tells you absolutely nothing about what the band sounds like, nothing about their ardent fanbase, and nothing of how two humble men from Pacific Palisades, California can keep a crowd enraptured for two solid hours at a combined age of 149!

The show tonight in Manchester is nothing short of a masterpiece in performance and delivery. The gig which sold out way in advance is packed to the gunwales. I’ve never seen so many people crammed into the Albert Hall. All ages too – from those that remember them from the early days to young FFS fans, and those who’d only discovered them recently, with their last album, the excellent A Steady Drip Drip Drip. A mate of mine, who has travelled up from London on the bus (£12 return, if you’re interested!), has seen the band 180 times. He’d just got back from Washington DC where they played at The Lincoln Theatre at the end of March. To say he’s their biggest fan is an understatement. ‘Nigel, every song is a vignette on life.’ He told me in the pub afterwards. “I’ll use that in the review I told him! I spot him from the balcony, which is hot as hell, throwing his head back, arms forward, singing every word! 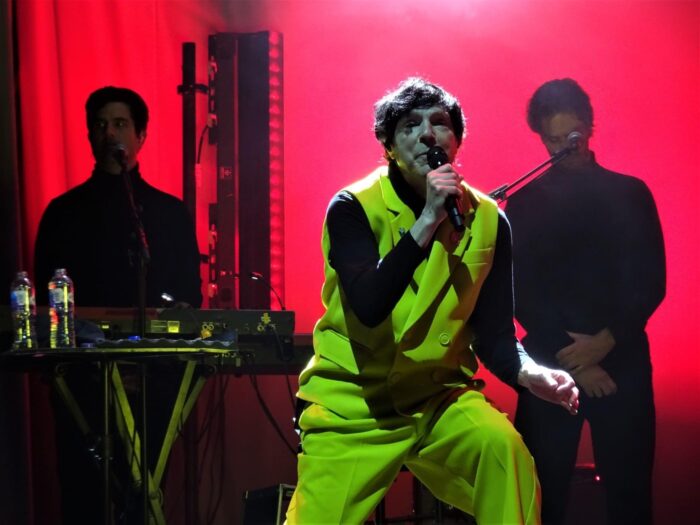 Interest surrounding Sparks is at an all-time high. Their film The Sparks Brothers hit cinema screens the middle of last year. Releases by Amazon and available on Netflix (We watched it after the pub!), it’s a warts and all biopic covering their entire career, with guest appearances from some of those who crossed their paths along the way. It tells an honest and frank story of two ambitious brothers: one with a love of classical music, and an extraordinary talent for writing songs. “He likes to call it ‘composing,’ says Russell tonight, “It sounds more high highfalutin,” the other, with a penchant for NFL and performance.

Nine years ago, they scored the soundtrack for a rock opera, Annette, which finally came out last year starring Adam Driver. They open tonight’s set with So May We Start from the film’s opening scene. Russell is in a mustard yellow suit (which weirdly goes orange under the blue lights), with a low-slung crotch, which allows him to perform some tasty, age-defying moves around the stage. Ron, with his (now) trademark; pencil moustache, (he ditched the Hitler version), stares blankly from his keyboards; an act he’s been performing since the band’s inception. The tracks come thick and fast with the operatic and theatrical mixed in with older classics – Tips for Teens and Get in The Swing mix it up with I Married Myself, which sees Russell tipping his head and staring into a mirror, We Love Each Other So Much, again from Annette, and Wonder Girl from the band’s first album. His voice is crisp and solid. The duo shares vocal duties on Shopping Mall of Love which sees Ron standing center stage, delivering his monosyllabic lines with trade-mark deadpan delivery.

Sparks could be seen as aging duo living on past success, playing ever smaller venues, and tumbling slowly into obscurity, but here is a band at the absolute top of their game. Never resting, never sleeping; not prepared to let a little thing like age get in the way. Releasing albums, collaborations, soundtracks, (they have another in the pipeline), and above all, staying relevant, and engaging full-on with their adoring crowd.

It doesn’t take long before the whole auditorium is on their feet clapping along. The atmosphere is all-enveloping, smothering – pure joy – you can feel the excitement in the air. It’s tangible – on every smiling face, between every clapping hand – something you rarely get at a live event. It’s pure harmony and love – incredible to witness, to be a part of – bodies crammed in downstairs – swaying to every beat.

Russell has a stool at hand for some of the slower numbers, but he doesn’t sit still, his leg, pointing forward, ready to jump into action. I can forgive him for wanting to take a breather, and when he does get up and dance around the stage the crowd goes crazy – he pirouettes around Ron. A remarkable performer.

During the Number One Song in Heaven, Ron gets up and pauses centre stage before doing his signature ‘Ron Dance,’ galumphing front of stage, legs swinging, with a manic look on his face. It’s hilarious, and for me, totally unexpected. At the end, he calmly returns to his place behind his keyboards.

The show culminates in that song and by this time you can’t see for swaying bodies and camera phones – This Town Ain’t Big Enough for The Both of Us, with its haunting, twinkling opening, peers slowly into view, before slamming into its magnificent glam stomp and searing guitars – a genuine, 100% bonafide classic.

Sparks round up the show with an encore of Suburban Homeboy before closing with All That from A Steady Drip Drip Drip. They miss a few classics out in favour of tracks from Annette, like Amateur Hour, but who can blame them? 25 Albums down, where do you even start?

I don’t think the pair quite expected the incredible reception tonight, the elevated love and respect. Maybe It’s the lockdown – the last two years heightening people’s perception and appreciation. Whatever it is, the pair are genuinely touched and thank the crowd over and over. “We’ve played Manchester before, but I can’t remember anything like this evening,” says Russell, before introducing all the supporting performers in the band – honest, humble, and self-deprecating to the end.

Tonight was a triumph for the band, who complete their UK dates at Bexhill-on-Sea on Saturday 16th of April before heading over to Europe. You may have guessed from this piece that I rather enjoyed it. My mate John, with 180 shows under his belt was in his element!

Words by Nigel Carr. More writing by Nigel on Louder Than War can be found in his Author’s archive. You can find Nigel on Twitter and Facebook Listen to Nigel’s show on Louder Than War Radio – Wednesdays 9-11 pm! here and on the free Apps:  https://s2.radio.co/sab795a38d/listen