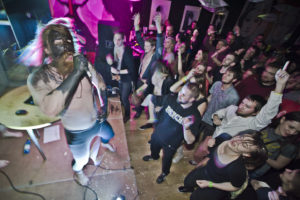 Translated from Polish by Aleksandra Szkudłapska

SpaceFest! is a festival for fans of spacerock, shoegaze and psychedelia and is the one event that should be on your radar and worth checking out come early December next year, as this festival is an annual event.

SpaceFest! kickstarts the North-East European winter in high gear with the help of an arsenal of capable musicians and enthusiastic crowds. This year’s event featured a number of British musicians – The Telescopes, legendary in their own right today as a shoegaze powerhouse and a mainstay of Creation Records back in the day; Wales’ based trio Lights That Change, whose sonic offerings are delectably nestled in the same sonic bed as the output of 4AD’s golden years; and TAU, a new tribalistic-influenced band headed by Shaun Nunutzi of Dead Skeletons fame.

Of course, there was also a whack of Polish musicians here (got to support the home team too) and some visitors from Central and Northern Europe (DYN and Kairon: ISRE respectively), and even from down under (Hugo Race, formerly of Nick Cave & the Bad Seeds).

Early winter is the best time for discovering music: it gets dark early, which makes it easier to focus on sounds and look for new, exciting records. For the past five years, in Poland – Gdansk, to be precise – this season has invariably been associated with SpaceFest! – a festival for fans of spacerock, shoegaze and psychedelia taking place during the first weekend of December.

A particular highlight of each edition is Pure Phase Ensemble: a fluctuating group of young musicians composed specially for the festival, who meet for a five-day workshop conducted by an invited artist and present the resulting material during a special concert (past leaders of PPE include Ray Dickaty (Spiritualized), Chris Olley (Six By Seven), Laetitia Sadier (Stereolab) and Mark Gardener from Ride).

This year, the workshop was curated by Hugo Race and coordinated by Karol Schwarz (co-organizer of SpaceFest! and head of the underground Nasiono Records label). Other musicians came from Polish bands Lord & The Liar, Ze Velocipedes, Daktari and C4030. The show itself could be divided into two parts: in the first one, Schwarz’s trademark absurd stories – sometimes spoken word, at other times hummed – stole the show, backed by hypnotising, minimalist sounds (rarely have I seen three guitars being so quiet). In the latter part, Hugo Race’s songwriting came to the fore, accompanied by a particularly strong brass and drums section. The whole show was apparently played using only one chord. And managed to send the audience into a trance. The concert proved that the PPE formula still has enormous potential (this might have been an even better ensemble than last year’s outfit with Mark Gardener!). If I were to be picky, I’d say that Schwarz’s charisma at times tended to overshadow other members of the band, and the simple bass line occasionally sounded like the intro to Pink Floyd’s Money. Still, I’m already looking forward to the record.

If Pure Phase Ensemble’s gig was a trance, the same at the very least could be said about the festival’s headliners. On Friday, The Telescopes destroyed our ears with a wall of sound (they asked for all instruments to be set at the same level of LOUD), distortions and feedback. For the best part of the show, they either played while lying on the stage or entered the audience. At one point, the guitar player even set up a feedback and went backstage to get some food – I daresay no-one in the audience took it amiss (unless he just hypnotised them not to notice).

The festival closed with Saturday’s performance by Kairon; Irse! Young Finns embarked on a spacerock odyssey into the dark parts of the soul, tinged with hints of metal and noise. ‘This is a prison!’, a mate exclaimed during the show. ‘The hell is going on here!’ And, sure as hell, we followed these long-haired silhouettes straight to their gig in Warsaw two days later.

Another highlight was the comeback of Folder – a Polish cold wave-inspired band who gave a one-off performance, playing their entire Red Lof album from 2009. The voice of Joanna Bielawska (Asia i Koty) is as strong as never before, and – backed with a full band (contrary to her intimate solo project) – sounded incredible. Winners of the competition for young Polish bands gave average (Zimowa) or way-better-than-average performances (Łotry, with a Krakow-based Tom Waits on the vocals and a bunch of other colourful characters on the stage). And there was also Snowid, last year’s poster boy, who again managed to attract the public to his pagan techno ritual.

Other acts included DYN, a garage guitar duo-playing-as-a-trio from Berlin, Lights That Change, dreampop concoctions for those craving more delicate sounds and TAU, headed by Shaun Nunutzi from Dead Skeletons, who headlined SpaceFest a couple of years back. TAU is definitely a name to remember: despite the lack of a full set-up (the band’s instruments got lost between flights, so they had to make do with what they could borrow), their tribal, psychedelic songs enchanted the audience.

SpaceFest! is definitely the best time in December (maybe apart from Christmas) and it’s worth spending it among other fanatics of good sounds. The organizers make sure to have plenty of gifts and surprises in store: the majority of the line-up is usually composed of names we won’t find at big European festivals. What’s more, there is no real boundary between the public and the artists (who tend to just mingle with the crowd) – an unquestionable asset of this and other small festivals.

There definitely is a certain something to Gdansk and to SpaceFest! – a peculiar vibe that many a city (and many a festival) may envy. See you there next year?