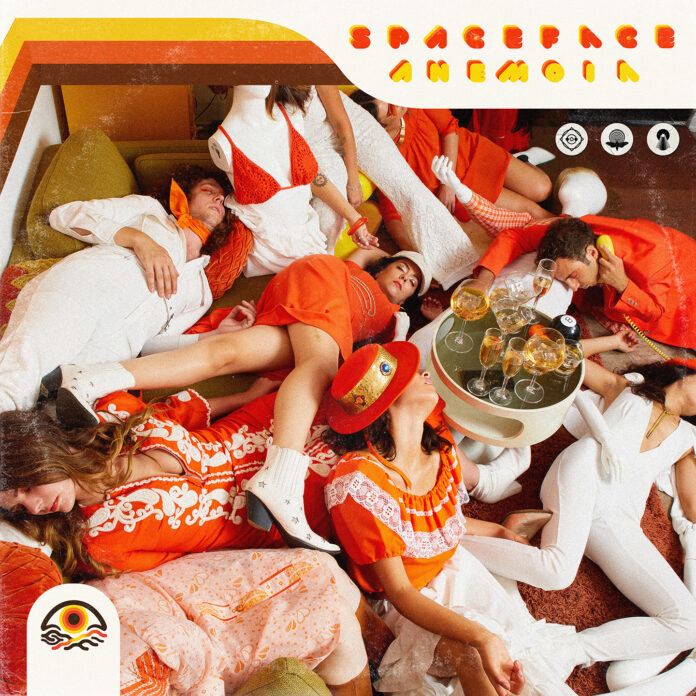 Spaceface have been together since 2012 and have released a number of singles, EPs and one album, Sun Kids (in 2017). They come from Memphis and Los Angeles and count Jake Ingalls (Flaming Lips), Matt Strong, Eric Martin and Daniel Quinlan amongst their number,  although they’ve recently also recruited Katie Pierce from Pierced to the line up.

The title, Anemoia, translates as “a longing for a place you have never actually experienced” whilst the album, the band say, is “a contemplative psychedelic pop odyssey, and a hopeful broadcast from the heart into Outer Space”.

Anemoia is the result of several months spent at Blackwatch Studios in 2019, working with producer Jarod Evans (The Flaming Lips, Sufjan Stevens). At times it’s reminiscent of Funkadelic, Midnite Vultures-era Beck and occasionally Spiritualized. Inspired by funk, rock classics, yatch rock, psychedelia with a fair bit of sci-fi thrown in; or as they describe it, ‘beautiful musical oddities, ranging from dancy indie ballads to modern disco anthems’.

I’ve listened to the album a few times over recent weeks and how Spaceface describe it is probably the best. Every time I play it I hear something different, there is so much going on here. It’s addictive listening. It begins with the spoken word invitation Universe Whisperer, before dropping into a trilogy of funk; Happens All The Time, which incorporates a children’s choir (briefly reminding me of the Langley Schools Music Project), Rain Passing Through, and Pina Collider. The latter sounds like it could have fallen straight from a party scene in a blaxploitation movie. Throughout the album there is a groove and a fine balance between acoustic instruments, heavily-processed synthesizers and drum machines.

Ludus Love, Panoramic View and Classic Style maintain the spacey feel but bring in more of a yacht rock influence. There is a definite ’70s feel to proceedings. I can’t really pick a stand out track, however I would say my favourites are Long Time, featuring guest vocalist LABRYS, and Jamais Vu with their fellow Mothland act Meggie Lennon. The former takes me back to hearing Kid Loco for the first time, the latter sounds not dissimilar to early DJ Shadow on Mo Wax. By the time you get to the final track, Earth In Awe, this 12-song supernova will have left a hazy trail of uplifting ear worms and sent the listener into a peaceful and almost dreamlike state…