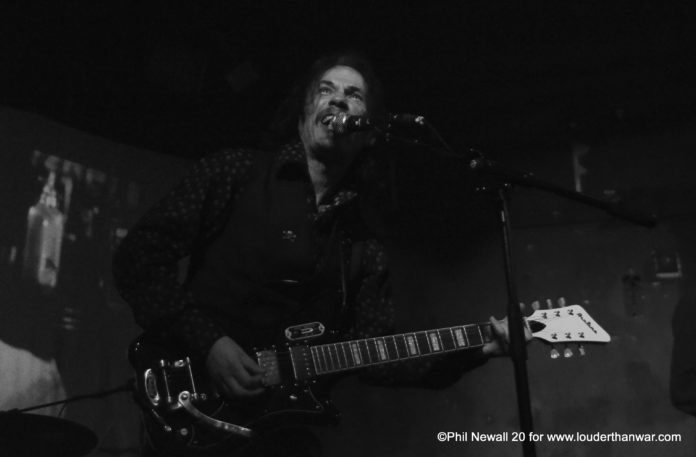 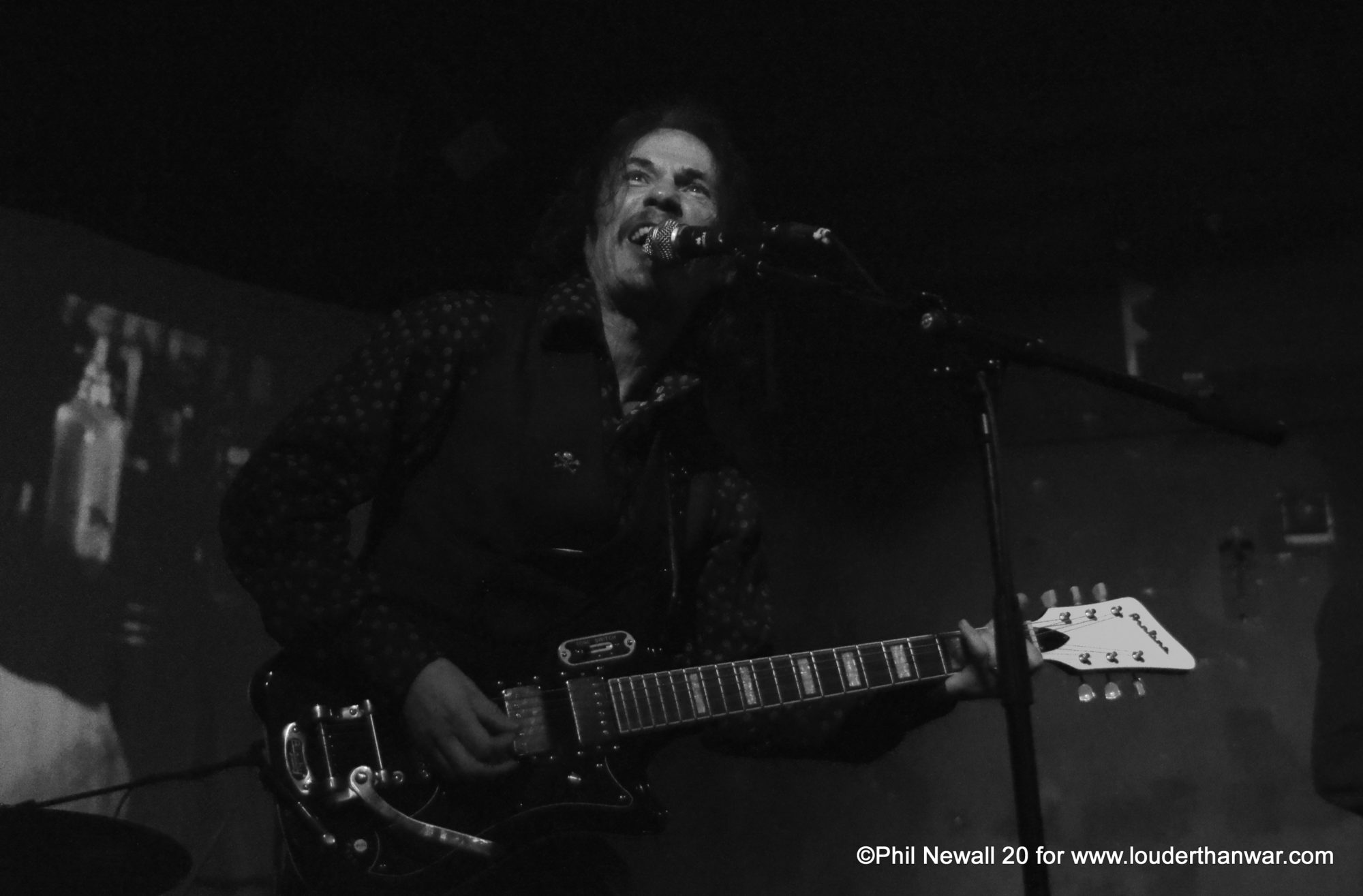 I’d argue that Space have been largely written out of the post Eric’s history of Liverpool, certainly by those claiming to have a more refined taste. The likes of McCulloch, Cope, Power et al are widely revered, yet Space founder and effervescent frontman Tommy Scott is cast aside; perhaps due to being bundled up in the Brit-pop scene, perhaps its due to having multiple Top 20 hits including two Top 10’s, and there is something unsavoury about pop success; either way he and his freaks were warmly welcomed onto stage during a Storm Denis battered Chester.

Scott, complete with a handle-bar moustache is looking like a Mexican gangster, he is flanked by bass player Phil Hartley who looks to have fallen straight from the Appalachian mountains, and Franny Griffiths who for unknown reasons has a haircut resembling Heinrich Himmler bounces around behind an array of keyboards; the only one of them looking vaguely ‘normal’ was drummer Allan Jones – though he soon dispelled that myth when he began hammering the life of his kit during opener ‘Money’ a track first released back in 1985 ahead of a twisting journey via chart hits and misses to material from the forthcoming ‘Music for Pleasure, Music for Pain’ album.

Scott is at ease on stage, he looks content and that is reflected in his delivery, his voice is strong, his band are tight; he moves around the darkened stage backlit by a video drop which projects a clip for each track. Franny cranks some serious industrial noise from his trusty Virus T1 to open ‘Begin Again’ – this is dark twisted crooner pop, similarly with ‘Avenging Angels’ which crashed into the Top 10 in 1998, however here in the live we are presented with a much darker beast, Phil Hartley’s sonorous bass matched by the motorik drum refrains provide the perfect platform for all manner of mayhem courtesy of Franny Griffiths as Tommy takes to the raised crash barrier. 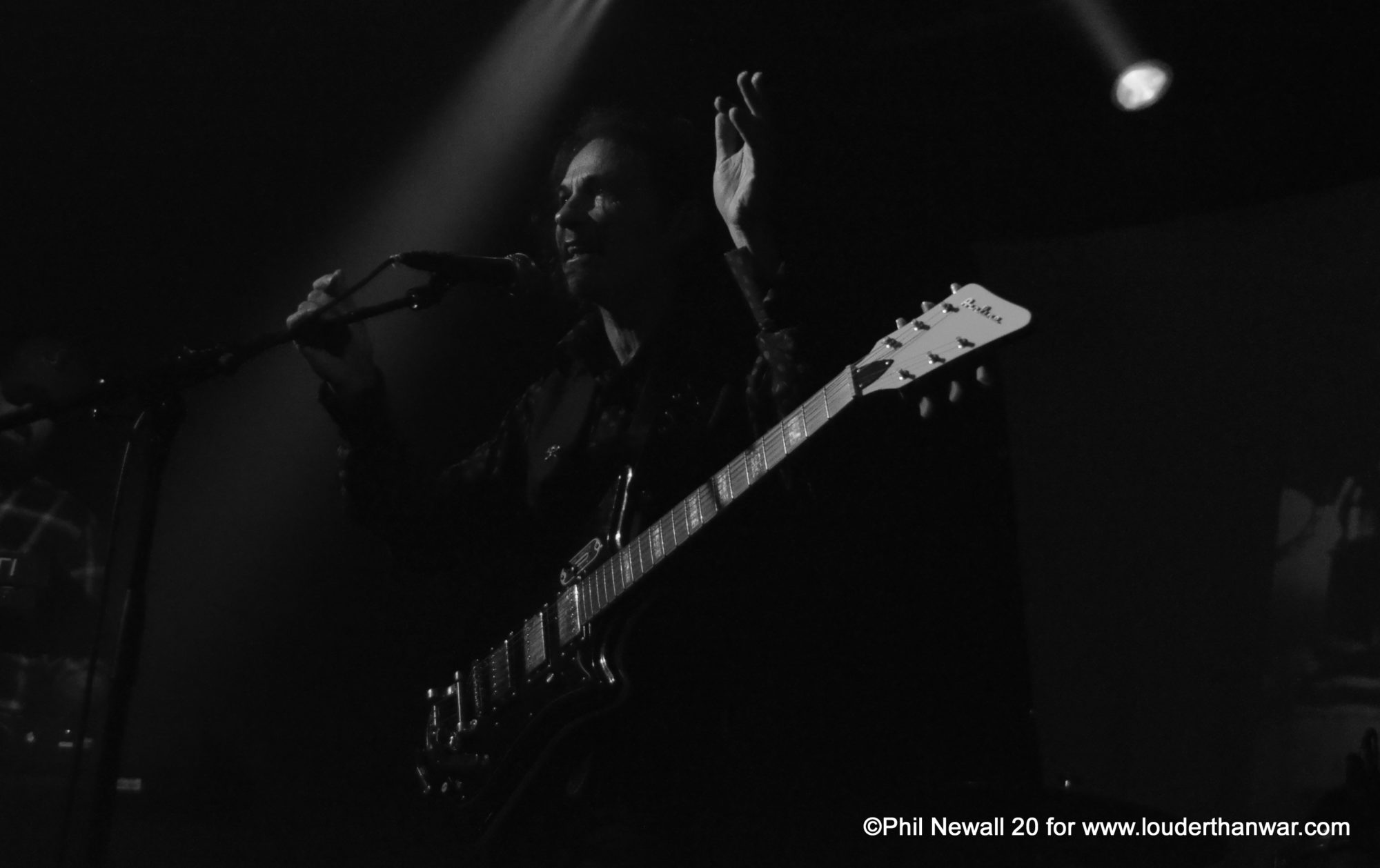 We travel on through ‘The Ballad of Tom Jones’ a deranged part paean to pure love, wickedly clever, dripping with sexuality, whilst 2014’s ‘Mister Psycho’ retains that authentic and distinctive synth sound complete with Vincent Price cackles as the audience bounce in unison; in true Space “we’ll do what we like” attitude they launch into a cover of The Animals ‘We’ve Gotta Get Out Of This Place’ that in between necking Jack Daniels Tommy announces will be included on the new album. 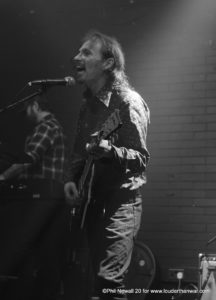 Former Lightning Seed Paul Hemmings is brought on for ‘Female Of The Species’ which allows Tommy to clamber into the audience; the songs subtle Latin vibe complementing Scott’s appearance as he intones “Frankenstein and Dracula have nothing on you, Jekyll and Hyde, join the back of the queue” with clipped malevolence.

‘Charlie M’ from the self-titled debut album is possibly the nearest track to what could be identified a Brit-Pop, yet here it is delivered with such intensity that it sits perfectly next to the newer material, this cohesion continues with closing track ‘Me & You Versus The World’ complete with the genius “I hit him on the head with the only thing anywhere near me. A tin of baked beans and a women’s weekly” line.

Space delivered a hugely enjoyable set of warped pop, if you haven’t paid them much attention in recent years then now is the time to become reacquainted.

Space continue their ‘Music For Pleasure, Music For Pain’ UK tour throughout March and April.