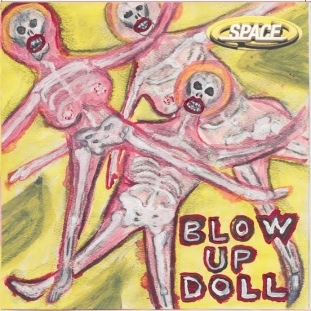 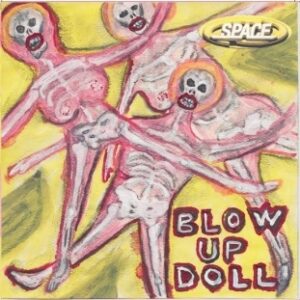 A ridiculously limited print run of just 250 copies will probably mean that unless you move with the speed of Usain Bolt this 7″ gem will pass you by; that would be a shame…a real shame, apart from (apparently) coming on blow up doll coloured vinyl; how would I know? Errm…I am reliably informed by ‘a friend’ – now lets move on.

This latest release from the revived Space ably demonstrates that whilst they are able to craft a pop-centric tune, there really is a disturbing element to their psyche.

‘Blow Up Doll’ is darkly delicious, a genuinely twisted brew of influences – Tommy Scott is almost Leftfield period Lydon as he wails “there’s no protocol in alcohol”, an early 80’s drum machine pattern cements the track, a Virus synth is proffering up all sorts of distorted Thomas Dolby(ish) bleeps, and noises, then a cavernous bass punches you in the chest…”you’ve got me dancing like a blow up doll” before the same drum refrain that defined Herbie Hancock’s 1982 ‘Rockit’ skitters across the middle eight – whilst Space have looked back at their roots, the neat trick is making something that sounds so current; this one will definitely burn its way into your head!

‘Killing In Widescreen’ is similarly, psychedelically dense; shards of reference bounce around this electro tribal belter – you could dance to it, pending on your position on the spectrum!…whilst ‘Favourite Gods’ has a expansive vibe to it, at times there are traces of ambience, before being wiped away by a weirdly claustrophobic vocal and clattering rhythms – Pop music at its best!