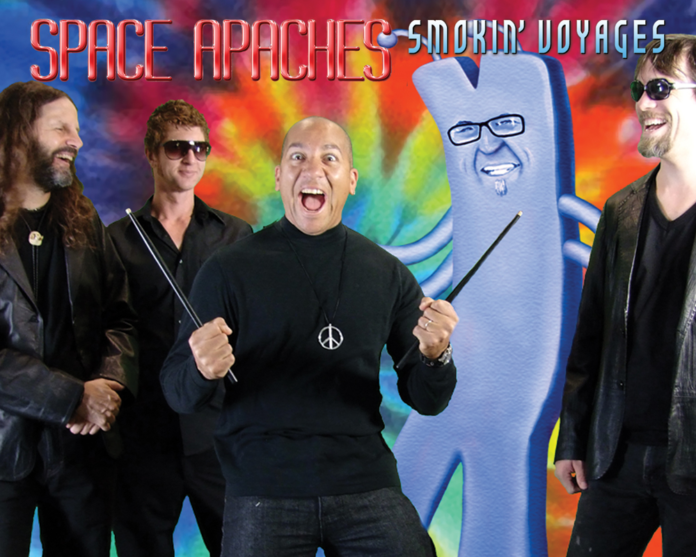 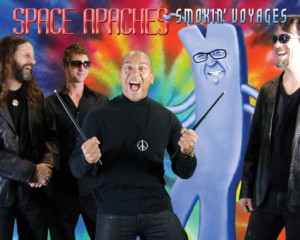 Rock n’ roll with a twist, a touch of country, and hint of Santana, a splash of funk, a sprinkle of blues, twinkle of Grateful Dead, and a blast to listen to, the studio contrived band, Space Apaches release “Smokin’ Voyage”.

Compared by soundcloud as “kinda like a psychedelic Eagles with a sense of humour”, the Space Apaches just love to record music and that fact is apparent in the songs on this album.
Each one of the members of the band is an undeniably skilled musician. The band is composed of, Jim Arrendell, on the drums, Rob Geisler on bass, Aaron Price, steals your heart on the keyboards and on the guitar, leader of the fraction, Andrew Reed a lead vocalist that doubles on guitar as does Tom Leiner. The songs are all written by Andrew Reed, with the exception of “I Am The Six O’clock News”, and the two cover songs, “Just Dropped In (To See What Condition My Condition Is In)” and “Ghost Riders In The Sky”. Andrew also produced the album. It was recorded at Sedwick studios in Asheville North Carolina, where the boys are from.

The cover, “I Just Dropped In”, is quite irresistible. The song itself was originally fun to begin with. The Space Apaches give it a refreshing energetic flare as well as a psychedelic gospel sound. The vocals are bluesy and pay homage to Tom Petty. The second cover, “Ghost Riders In The Sky”, is haunting, but uniquely remastered and a very decent rendition compared to the original. “I’m On My Way To Feelin’ Fine”, is an nostalgic tune, void of drama, and an authentic sound. Great piano playing! “In my Mind”‘ is a mix of Bluegrass, and rock ‘n’ roll, with a surprise jazzy hook. It’s an energetic song, as are most of the tracks on the album. “SunRise”, steps right out of the sixties and slaps you in the face both lyrically and instrumentally with the days of flower power, peace and love. “Smile”, is overpoweringly Carlos Santana revisited and borrowed, especially the introduction to the song… But who can go wrong with Carlos Santana. Track number twelve, “Love Should Come Easy”, is a breathlessly funky, energetic, jazz composition. The instrumental breaks are brilliant. Feel free to get up and dance, slap your hands, bop your hands, and just enjoy.

My personal favorite track is number thirteen, a song called “Maybe”. It has a melodious tone, contains miraculous harmonies, chords and evocative lyrics. The video of the song helps accentuate the carefree attitude and happiness it evokes. Reed carries a great look, which makes the video and the song all the more enjoyable.
Ultimately the album is a good solid purchase, especially if you have the need to simply feel good.

Watch the music video for “Smile”: