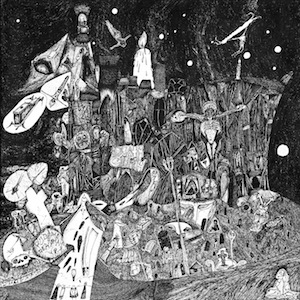 After bumper reissues of Pope Adrian 37th Psychristiatric, Cacophony and Archaic, it is now time for what is arguably the outsider punks’ most beloved album to shine. Rudimentary Peni’s first LP, Death Church has been remastered and revamped by Outer Himalayan and Southern, returning on 180g black vinyl with the original fold-out artwork and an mp3 download code. Due for release on 12th May – some 31 years since it was originally recorded – and with a gatefold CD version also hitting the shelves. This is a reissue to get excited about; an obstinate and absolute cult artefact brought kicking and screaming in to the present to scramble preconceptions of punk once again.

Death Church was recorded in two days at Southern Studios in April of 1983. It was the band’s ﬁrst long-player, following their self-titled EP in 1981 and the Farce single on Crass Records in 1982. Death Church wore its contents on its sleeve, quite literally. The intricate line drawings of vocalist/guitarist Nick Blinko are dark visions of madness, religion and death…all of which are to be found in the lyrics within. Musically, Death Church has been embraced and claimed by every fringe musical niche of its time…it’s the album that brought together the death rockers, anarcho-punks, peace punks, hardcore punks, proto-metallers and art-rockers.

In related news, Southern Records and I are intrigued to hear the result of the new supergroup in town, Teenage Time Killer (named after a Rudimentary Peni song, and featuring Dave Grohl, Corey Taylor, Jello Biafra, Nick Oliveri, Neil Fallon, Keith Morris, Max Cavalera and others.)

Exactly how much they will reference the music of their namesake we don’t know, but we are keen to find out.