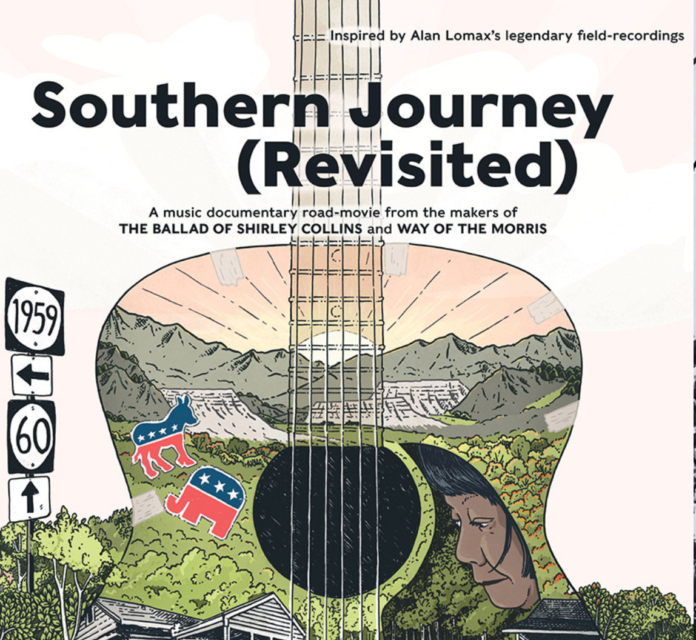 Southern Journey (Revisited) is the remarkable new film that follows in the footsteps of the famous trip in the USA’s deep south by Shirley Collins and Alan Lomax in the late fifties. They were there recording folk musics of the time to build up an archive before it all disappeared.

The film makers, who had already, made the great Shirley Collins documentary a couple of years ago, returned to the deep south of this great trip. They uncovered the last fragments of the music, ancient memories of the trip and an insight into the troubled psyche of Trump’s America.

WATCH THIS! interview with the film makers here by John Robb

Exploring the sounds and history of the Southern States, SOUTHERN JOURNEY (REVISITED) is both a music documentary and a road movie. Set against the incendiary backdrop of the 2018 mid-term elections, and accompanied by a glorious soundtrack of blues and bluegrass, hollers and spirituals, the film retraces the route of an iconic song collecting trip from the late 1950s – Alan Lomax’s so-called “Southern Journey” – seeking out echoes of the past and clues to the future. The film’s haphazard and colourful cast of characters help provide a much-needed riposte to certain widely held and enduring beliefs about the South. Made at a time when the hard-won victories of the Civil Rights movement (which served as the backdrop to the original Southern Journey) are being challenged, the film travels beyond reductive stereotypes to explore instead the diversity and complexity of an area steeped in a fertile musical heritage.

More information on the film here…