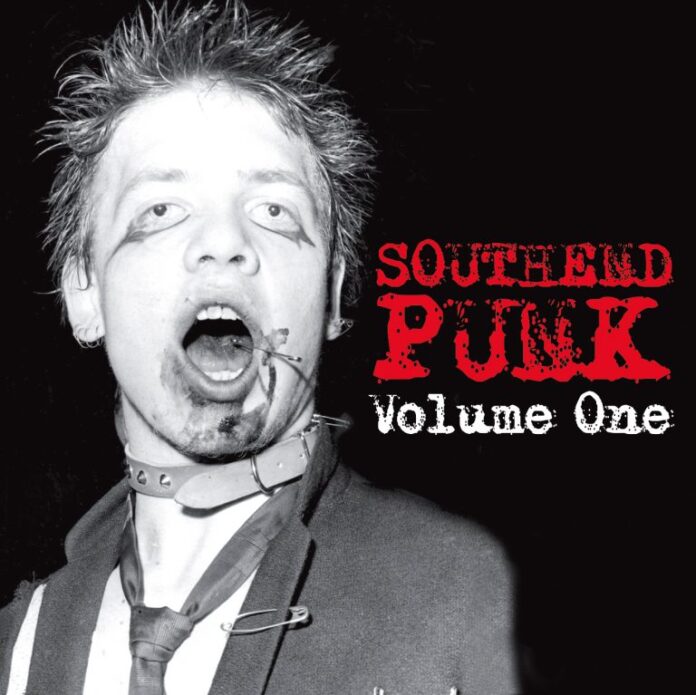 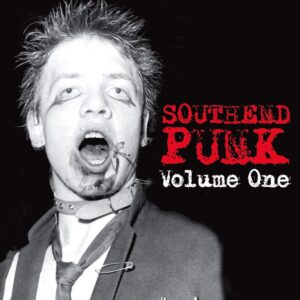 A must for collectors of Bored Teenagers, Killed By Death and Blood Stains-type obscure late70’s/early 80’s punk compilations – here’s one you haven’t got!  Southend Punk covers 1978 -86 and it really is a great time-capsule of punk artefacts from outside the capital. 1,2,3.4 shouts Ged Babey.

If like me, you already have loads of these compilations -rare, obscure, demo-recordings by teenage punk bands who never had any real measurable success for the most part, then you sometimes think, ‘Do I really need another one?’

Well, in this case you really do!  It is a well put-together disc, that runs-together beautifully as a playlist of songs you don’t know, played in a style you do. And you do get a sense of the location as well.  Ordered chronologically you can hear the gradual evolution in style: you get the genuine Roxy WC1 punk rock manic sneer of the Machines, the local R’n’B Feelgood influence (Steve Hooker Band and the Vicars). second wave naivety, anarcho-protest (Kronstadt Uprising) and mod-ish power-pop. The slow-down into reggae-tinged rock (the Bullies), the moody phlanger-users of the more post-punk (Allegiance to No-one) and the inevitably, the spirited amateurs copying their favourite band(s) but sometimes to great effect.

It has been lovingly and painstakingly compiled by Steve Pegrum, the man behind the fantastic website Southend Punk Rock History 1976–1986 which he set up to celebrate and preserve the heritage of this seaside town on the Thames Estuary’s punk scene.

The album starts with The Machines ‘You Better Hear’ (formed in ’77 and who played The Roxy and Vortex) and The Steve Hooker Band ‘How Did You Know?’ from ’78 and ’79 respectively. The third track – ‘Radio Roy’ – by The Vicars features Alison ‘Alf’ Moyet on vocals and is from a rare studio demo recording from 1979. This is followed by ultra rare tracks by The Deciballs, The Psychopaths, The Shocks & The Bullies (The latter featuring Perry Bamonte who later went on to play in The Cure). The Icons, The Sinyx (formed in ’79) & The Kronstadt Uprising (formed in ’81) illustrate the ever evolving Punk scene as more Anarcho influences came into the mix. The Sinyx and The Kronstadt Uprising both released seminal 7″ Vinyl EP’s at the time so it is great to have them represented here. Enduring local bands Allegiance to No One, The Burning Idols, The Prey & The Armless Teddies continued the Punk spirit and illustrate the ever evolving Punk sound, some being published here for the first time, with the Teddies ending the compilation. (Volume Two will be on its way sooner, rather than later we hope).

For archive recordings the sound quality is very good indeed.  The packaging is info-packed and old photos are superb. If you are a collector of this kind of compilation you know the kind of thing to expect: Attitude over ability and the affected ‘Rotten’ vocal, the Good Vibrations and Raw Records label type sounds  (the Deciballs, the Shocks) giving way to the later Discharge-meets-Subhumans vibe. (The Icons / The Sinyx).

There is always the hope that comps like this throw up an absolute punk rock gem -an unheard classic – and Southend Punk has several; The Burning Idols Give Me A Chance is very cool and Sleepless Nights by the Prey is a perfect piece of Mod-Punk albeit very like Modern World-era Jam.  Even The Armless Teddies instrumental Stranglers pastiche is a joy to hear for the first time.

I can honestly say there’s not a bad track on the album – the best track to represent each band seemingly being chosen.

Sales should be good in the Southend area obviously because the kids will be able to hear what grand-dad did in during the punk wars.  The odd Alison Moyet completist will be scratching their head thinking; ‘Bloody hell Alf – thank God you met Vince Clarke!’ But punk collectors of the rare and raw, unheard sounds from the halcyon days are in for a treat.  The best tenner you’ll spend in ages.

All words Ged Babey except press release in italics