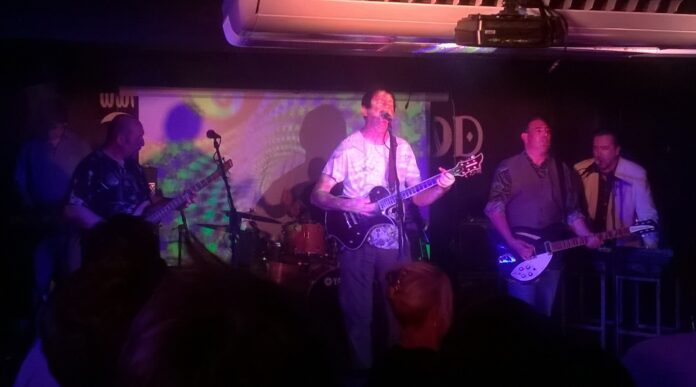 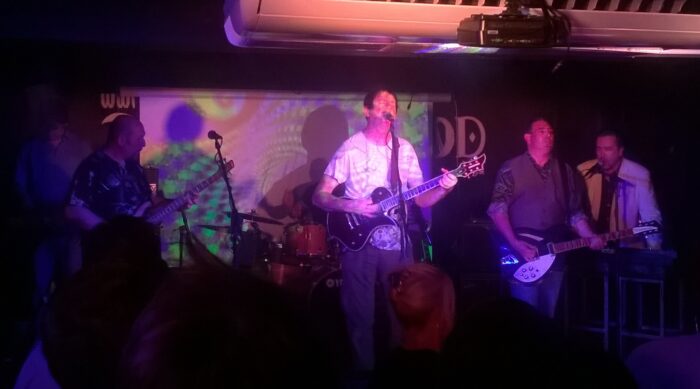 I was a tad too young for punk. I grew up accepting the marketing department version of the genre with its mohicans and safety pins. The truth is there were huge numbers of punk bands who were simply ordinary kids doing amazing things with guitars with little or no idea how they did it – they simply made it up as they went along. I’d never heard of The Hamsters before this gig, but having googled them (that’s the new word for “research” isn’t it?) I found out they were/are semi-legendary Manchester punks with a repertoire of spiky guitar-driven tunes laden with part amusing, part thought provoking, social commentary lyrics. Perfect. REAL punk, from the Department of Lost Causes.

The Hamsters have a slight weariness about them, as old punks sometimes do, but still they play their songs like they’re 19 again. The energy is there in buckets that some of today’s young bands can only dream of. The Hamsters are still doing it because they want to. They’ve probably all got day jobs (the guitarist looked suspiciously like someone I’ve sat alongside in a health and safety meeting) but you get the feeling that being in a band always was, and always will be, the most important thing they do. Their weariness probably stems from thinking no one is listening, even after all these years…and come to think of it, no one ever did…well, I can assure them I was listening and I loved it.

Singer Moey (I love how some people have nicknames that survive into their 50s) announces one song as an Average White Band cover; Another is “about smoking Park Drive on the bus”; He laments how today’s TV adverts depict northern soul as being fuelled by Weetabix – “That’s not what I recall it being fuelled by!” he says…

The gig is a great punk gig. We even have a guy ballooning round – he smashes a glass and gets thrown out by the bouncers. I’m guessing it could be The Mayflower in 1979 again, except these days most people in the audience hold little glowing mobile devices (and I include myself in that).

Between The Hamsters and Soup, a punk poet called Kev T (I think – sorry!) recited several of his rhymes. Sometimes satirical, sometimes biting political and social comment, his final poem was about Sophie Lancaster, the poor girl murdered in a Bacup park in 2007 for being a Goth. You could hear a pin drop at its conclusion. Well done pal. A fitting tribute to a poor girl, pointlessly killed.

Soup were running late – their drummer Mike was at Stanstead Airport, jet setter that he is. Frontman Andy Whitaker (who had to superglue the top of his finger back on after a tragic accident that took place during set up) tells me they expect him back in Ashton about 11pm – is that too late to start the gig? In the meantime legendary drummer John Lever is soundchecking the drums and is followed on to the stool by Dug McCloud who was told “If you want to get in for free, you have to play the drums”.

So at half ten Soup take to the stage with the cascading psychedelia of “Colour Coded” from their album “Album”. Andy Whit’s latest project is probably the most loose and comfortable band he’s been in. The musicians, who include Oz Cooper, Elliot Wheeler, Colin Smith and Chad Whitaker, swap instruments on stage. Some of them leave the stage during certain songs to visit the bar, the loos, or to just say hello to someone. I love the easy going nature of it all!

The songs are a wonderful mixture of acoustic psychedelics, sky-soaring keyboards and epically flowing guitars. Andy W. has a rich voice backed with some nice harmonies from his cohorts. Each between song interlude is punctuated with what sounds like Richard Burton talking about mind-bending drugs, while a projector flashes all sorts of colours and sights and sounds (probably) on the screen behind the band. It’s all very creative, right down to the keyboards perched on top of two bar stools!

My favourite song on Soup’s album “Album” has always been “The Apple” which is a brilliant piece of hippy-like craziness, but tonight songs like “Hope For The Working Classes”, “Spider In My Room” and “Shoegaze Song” are also remarkable. The band finish with a couple of tunes from Whitaker’s solo album of two years ago “Things That Happened on Earth” (well worth a listen) a Pink Floyd cover and old Weaveworld number – “Out and Down” which is fitting as all four ex-members of that semi-legendary Ashton band are in the venue tonight (Andy Whit, Andy Clegg, John Lever and Aky).

After the after gig party, Soup headed off to the studio to start work on their next album. I, for one, can’t wait to hear it.

All words by Pete Bernard. More from Pete can be found at his Louder Than War Author’s Archive.