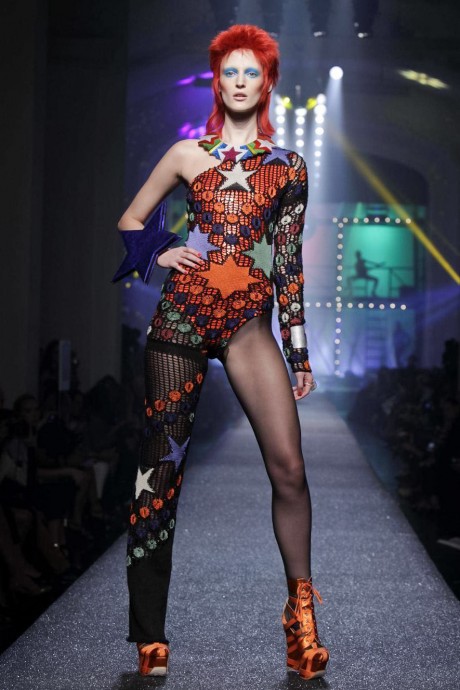 Style –does it matter? Specifically speaking, in music?

Style – “a distinctive appearance….governed by principles of design” – (OED definition)

“This one’s dedicated to all you Gucci bag carriers out there its called you got goood taste” – The Cramps, “You Got Good Taste.”

When the music world was shaken by the death of undoubtedly one of his biggest icons, David Bowie, earlier this year, the news reports quite rightly seemed unable to settle on merely referencing a “musician”, instead referring to an “icon” and his incredible visual personas over the years. After all, this was someone who had an entire exhibition at the V&A dedicated to their aesthetic. Surely, then, we cannot just write off the idea of style and fashion being a huge part of music as “superficial”? Surely it can contribute in a more interesting way?

From a personal perspective, I appreciate that my love of fashion seems completely at odds with other aspects of myself – the traditionally academic type, who also writes the odd angry tirade about body fascism – but not only do I hope to set out why this needn’t be , but also why its role in music is more important than we sometimes care to admit.

Writing theory on fashion culture isn’t necessarily new, nor has the culture in itself always been the preserve of the young -the Frankfurt School philosopher Walter Benjamin, for example, wrote a series of essays on the matter that didn’t surface in a publication until 42 years after his death. By the time of their publication in 1982, it seemed socially fitting that the subject of style and fashion could be part of an academic discourse, largely thanks to Dick Hebdige’s influential book “Subculture:The Meaning of Style” being published three years earlier and showing how much was ripe for debate on the matter. Yes, I write about Hebdige a lot, both to argue against and to reference, but that’s because someone from the world of academia dealing with the relatively new field of subcultural style was such a game changer that it has undeniably become a kind of benchmark. Subcultures have altered the way we view style and fashion history, primarily through their close links with music, but also through the way they have given each generation a visual signature that stood for something. The birth of the “teenager” as a concept was hugely important and while it pre-dates the rock’n’roll era, the age of young people listening to different music to their parents while wearing a different style sparked a whole culture of social youth identity. By the time the Modernists had emerged at the end of 1950’s, hitting their peak in the 1960’s, youth fashion was almost a political choice – mod being a working-class culture of dressing “better than your bosses.” And, crucially, it was accompanied by bands that dressed like that generation, that they could claim as “yours.”

I could, of course, go on from here regarding the matter of subcultural identity – punk alone has filled many a worthy text on the issue, with its broad church of aesthetics united by the music, from the DIY vibes of the young working classes audiences creating their own clothes to the high end stylings of Westwood and McLaren with their Sex and Seditionaries shop. Of course, you can’t write about the relationship between music and fashion without referencing Westwood and McLaren – the creation of the Sex Pistols to hope promote their clothes was after all a huge moment in cultural history which helped to shape subculture as we know it, a masterclass in aesthetecizing rebellion (with Westwood now an institution of high fashion.) But, of course, an aesthetic neednt be tied to a subculture. A fashion phenonomen that occurs less frequently but can be just as inclusive and interesting is when a single bands image has a powerful enough influence on its audience that their fans become instantly recognisable. It no doubt takes a very carefully curated image to do this. A prime example would be when the Manic Street Preachers burst onto what had been a frankly rather unglamourous music scene full of attention-grabbing mouthiness and an arresting image – all leopard print, DIY-spray paint and eyeliner – to match. To this day, its still pretty easy to spot a die-hard fan, as the image was adopted along with their substantial, often highly intelligent viewpoints as part of their “sex, style and subversion” ethos, and there’s something incredibly unifying for fans of a band to be able to spot their “allies” so easily. The bands look is one which also influenced high fashion; noticeably the designer Raf Simons, whose relationship with them was a fully interactive one by the middle of the “noughties.”The relationship between music and high fashion had hit something of a peak by this stage anyway. Hedi Slimane at Dior practically changed the whole silhouette of mens fashion simply by drawing inspiration from his misfit musical idols, picking up such unlikely muses as pale, intellectual guitar band The Rakes. The crop of women on the music scene in bands such as The Long Blondes, CSS, Yeah Yeah Yeahs, The Kills and The Raveonettes all had aesthetics as varied as their music, and it was probably being my relationship with music at this time that actually sealed my relationship with fashion, enabling me to do things like visit a confidence-boosting stylist and accept work as a model without turning my nose in snobbishness. But there is still always a risk that aligning yourself as a musician to closely with the fashion world could see you decryed as a style-over-substance poseur. So, how to avoid that? Well, I’ve attempted to come up with a three-point plan as to how to be a fashionista musician, and keep your integrity…

Visuals are only really one part of image; something substantial and unique to go with those visuals is the thing that will elevate your image. Clearly, Bowie stands out as a master of this with the story and alter-ego status of Ziggy Stardust, as well as the blurring of sexual lines in an era of growing gay rights. Throwing some words onto your image is obviously another easy way of adding a bit of substance, such as on The Clash and the Manics political spray-painted shirts which match the sound of articulate ire. Carefully choosing which fashion campaigns you align yourself with would be another smart move -for the face of their eco-friendly, textile renewin campaign, H&M have opted not for a model but for (the albeit very gorgeous) MIA, who seems a perfect fit. Her own look of clashing colours and patterns isn’t the easiest to pull off, but certainly matches the rich culture -clash sound of her music, proving that twinning your style to your sound is a great way to craft an all round image, and if its one suited to ethical eco-fashion, well then thats all the better.

Okay, so admittedly my relationship with fashion can be a bit of a love/hate one, and there are undeniably certain things were it needs to pull its ideas together which actively really anger me , such as the unjustifiable continued use of real fur by some designers, and of course, its rigidly narrow concept of the ideal (paper-thin, young) body. The extremes I’ve witnessed that so many fashion models go to to maintain are dangerously boundary-free and, with cases like that of Ana Carolina Reston, who died from anorexia-related complication upon stepping off that catwalk, its high time the industry took some responsibility. Can music culture really help with this in any way? Kind of. The fashion industry often operates on a kind of cultural magnetism, drawing inspiration from other sources – so the more body diversity there is amongst its muses, the more the “ideal” can be relaxed and start to make exceptions. In term of drawing from music culture, this can admittedly be something of a double edged sword – Hedi Slimane’s aforementioned musical muses were the drive behind his preference for seriously underweight male models which has remained controversial ever since, with the excellent fashion blogger Poppy Dinsey citing his choice of waif-like model at his 2013 Yves Saint Laurent show a “woefully irresponsible) – but more often than not, attaching yourself to a culture which places talent first can cause the fashion industry to relax its ideals a little in terms of size, age, etc. Whether its Beth Ditto fulfilling the vibrancy of Jean Paul Gaultier, or Siouxsie Sioux looking jut as striking as the hordes of teenage models whilst wearing similar designs at the launch of Pam Hogg’s pop-up store, the best thing a musician with any ties to the fashion industry can do is to stick two fingers up to their “beauty standards” and just be themselves. There’s a surprisingly high chance the fashion industry will come round.

Yep, it’s the overwhelming, single thing that will prop up your style, and that’s to actually make good music. A great look without a great sound is a wonderful way to be derided by critics – fine if you want to just grab attention for attentions sake, but not so much for the long haul. I love a great looking band that you ould to be a part of, but first and foremost, it’s the sound that comes first – I also love a lot of acts for whom aesthetics aren’t a priority, and I think I’d feel a bit disappointed if say, Billy Bragg or Radiohead decided to get the stylists in. It’s the obvious point to make, but it really does separate the Bowies’ from the Black Veil Brides, in just the same way my dress collection wouldn’t get me very far if I decided to stop using my brain. Great style can just about sway your part in pop culture history if the music matches. Good taste is both aural and visual – with or without a Gucci bag!

I appreciate there are a lot of bands I could have mentioned in this piece who get the style and substance balance right. Let me know who you think gets it just right and we’ll keep the discussion going…