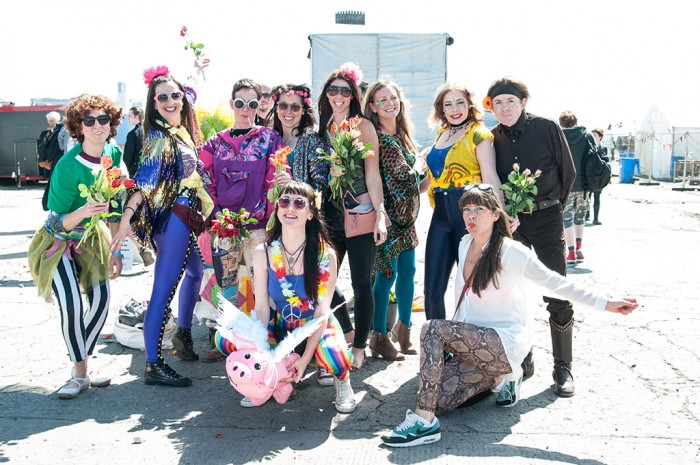 Louder Than War’s photographer Melanie Smith and reviewer Rick Leach are back for round two of Sound City 2015 in Liverpool – the sun is out and there was a raft of amazing music, plus lots of entertaining performers.

A whole lot about any festival (in the U.K. at least) hangs on how the weather turns out. Rainy, windy and muddy, then it’s generally a bit rubbish; if it’s warm and sunny then everybody is happier and a good time can be had by all. Luckily, out of the three days, the Saturday was forecast to be good and so it turned out to be. Maybe it was because the weather was good that I rattled through as many artists as I could from when I arrived at just after 2.p.m.

First off, I caught The Vryll Society playing what I thought was some seriously good improved stuff to ten punters and a few security guards at the Baltic Stage. Unfortunately, they were just soundchecking and when it kicked in properly their songs appeared to be a bit of a rehash of Syd Barrett-era Pink Floyd. Is it me or should this stuff have been despatched to the dustbins of history a long time ago? Are we supposed to be impressed with sallow youths reheating musical styles from nearly half a century ago?

Next up some unknown three piece playing the North Stage. (Unknown because stage timings seemed to go astray a lot of the time; something more than I struggled with. This is something Sound City should look at next year. If they are going to have more than one stage and artists are going to be juggled around then maybe they should at least have some sort of signage thing to show who exactly is playing. There did seem to be a lot of scratching of heads and “who’s this?” “I have no clue?” conversations happening.) Anyhow, it didn’t matter because the three plaid-shirted, lank haired chaps on stage didn’t do anything for me and the 30 or so others watching. They’d have been just about alright if they hadn’t started singing. There was no passion, no verve, no interest. Isn’t that what music has to be all about? I was ending up with more questions than answers and the day wasn’t getting off to a very good start.

Things didn’t improve much when I saw Moats at the Baltic. I am as much of a fan of mindless shouting as anyone but sometimes being bombastic and shouty for the sake of it doesn’t count for much. There does need to be something underpinning it and there were scant foundations with Moat. 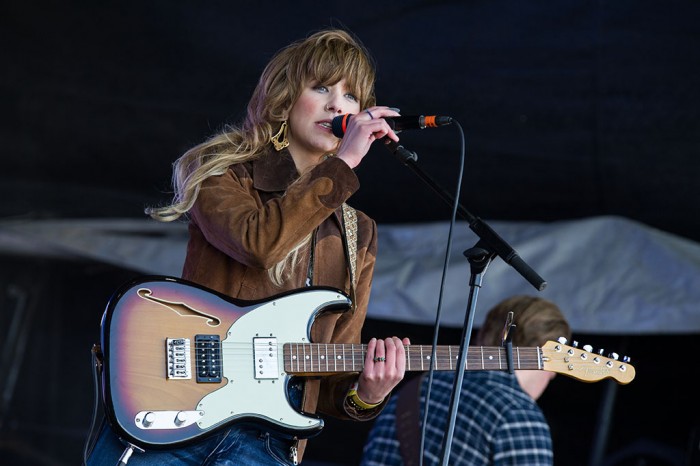 I was getting increasingly grumpy. Surely there was more to it than this, or had I picked the wrong bands to see? I stomped across the site to see The Sundowners play the main stage and my mood was immediately lifted. First off, it was good to hear women singing after having to put up with a whole bunch of fey and/or angry male singers. Second, their slightly heavy psychedelic/soft rock flavours fitted perfectly with skies that had turned cloudless and summerlike. I stuck with them for their whole set and was especially impressed with their last song, which rocked and rocked out. Someone to look out for.

All my preconceptions combined with what little I’d heard before had led me to think that R. Seliog (who I caught next at the Baltic Stage) would be an Aphex Twinny ambient noodling chap. I hadn’t expected to hear a great percussive, Krautrock groove, complete with a live drummer who drove the whole short set on at a great rate of knots. Another good surprise!

The Serpent Power back at the Atlantic Stage. Suede jackets. Acoustic guitars. Like a mix between softer tracks from Pebbles compilations and early Neil Young. Like a young Crazy Horse. Crazy Pony maybe? A bit too over thought, all the right boxes ticked, but it didn’t move me.

However, on the way back (yet again) to the Baltic Stage I caught one of the most bonkers acts I saw all weekend at the North Stage. I had no idea who they were at the time and I couldn’t really tell if they were singing in Hungarian or some obscure mid European language but they were ace! (It turned out to be French by the way.) There surely is a place for more clarinets in contemporary popular music as well as massive saxophones. Playing difficult time structures helps as well as doing it all with a sense of humour and a smile on your face. They went down very well with the crowd and it was good to know that it all didn’t have to be something too obvious. They are Aquaserge by the way. 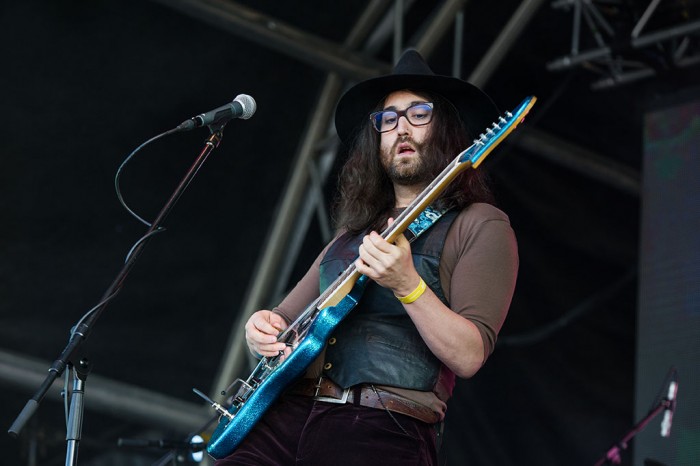 A few people had recommended Sean Lennon and Charlotte Muhl Hemp’s psychedelic band GOASTT to me beforehand. I had therefore expected good things, but sadly it wasn’t how it turned out. I’m afraid I found them a bit of a let down. This of course is all subjective and I believe Mel found them highly entertaining.

Next up Bohicas and Stealing Sheep. Not together, but consecutively. The former a loud, straight away rock r.o.c.k. band, ok if you like that sort of thing, but heading close to Bon Jovi at their rockiest and the latter, jaunty electro-pop with a nice unique twist. 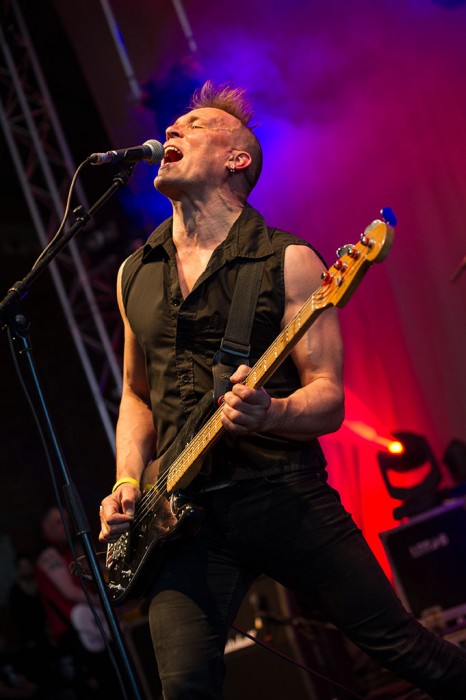 Now we come to The Membranes. or rather I did (featuring our very own John Robb on vocals and bass) for the first time. A band I had heard of, but have to confess I had never heard. I don’t really know why; just one of those bands that has passed me by. I wish they hadn’t. Where some of the bands earlier had shown a lack of passion, interest, enthusiasm joy and verve then The Membranes made up for it in spades. They were also extremely loud and for one of the very few times that weekend (not the only time, but one of the very few) they demonstrated a direct connection with the audience. It was more than that though as the line, that invisible but ever-present separating line between artist and audience seemed to disappear. Or rather, didn’t seem important anymore. This was what music should be all about!

Post Membranes, it was the turn of The Thurston Moore Band, who played to a large crowd in front of the main stage (who were mostly there I was sure for the Flaming Lips). Nevertheless, I enjoyed his Sonic Youth-y stylings. Nothing spectacular nor unexpected, but why change a winning formula anyway?

Mel in the meantime caught up with some of the festival frolics, like the Morning Gloryville Dance Club people,  handing out free hugs and flowers, a wander around the moored boat, and caught several new artists such as Black Honey, Hooton Tennis Club, Femme, Flo Morrissey and Tei Shu.

So, after a fair bit of pissing around and setting the stage up, it was time for Flaming Lips. Predictably, it was crammed at this point, with barely an inch to spare. It isn’t the largest of venues and I was surprised when I saw it. I think that one of the problems that Sound City may end up with if they carry on using this as a venue for the future is that they may be limited by the size of the artist they can book. When you have a space that’s restricted by water on two sides then there’s really nowhere else to go. Flaming Lips may have been at the upper end of it all.

However, that is all a bit pragmatic and boring and that’s not what Flaming Lips live are all about. What Flaming Lips are all about live is the chance for an hour and a half to forget the humdrum everyday things and lose yourself in a world of magic, confetti, strobes, Wayne Coyne dressed in a batshit crazy costume, happiness and all the rest. There was a big silver balloon sign that read “Fuck Yeah Liverpool” which was launched over the crowd. Everywhere you looked around, everyone was smiling. 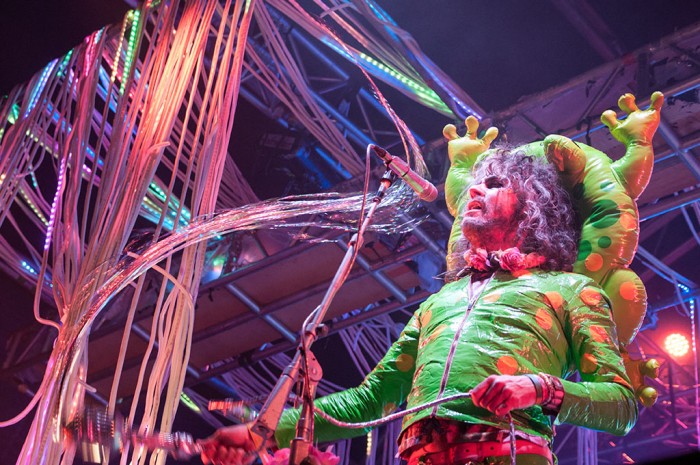 What shouldn’t be forgotten within the showmanship is that they have a complete raft of brilliant tunes, built up and honed live over many years. Flaming Lips not only know how to put on a good show, but they all know that without good music it counts for nothing. “Yoshimi Battles the Pink Robots” had everybody singing along and punching the air. I had thought that we wouldn’t see the inflatable ball make an appearance, but thankfully it did towards the latter part of the show; Wayne Coyne rolling deep into the audience during “Vein of Stars.”

They ended the show with “Do You Realise?”; a great anthem to close the second day. Our voices drifted across the river at midnight and we all went home with a song in our heart and a smile on our faces, ready for the Sunday.

All photos by Melanie Smith whose website is here. More by Melanie on Louder Than War can be found here. She can also be found on Facebook and Twitter.
Words by Rick Leach, find him on Twitter and Blog.