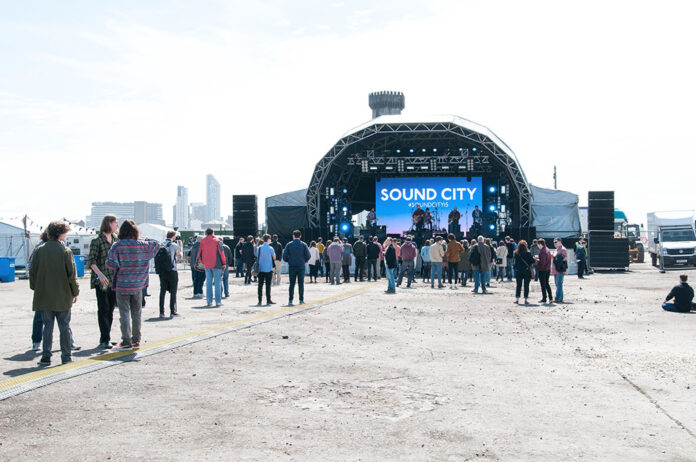 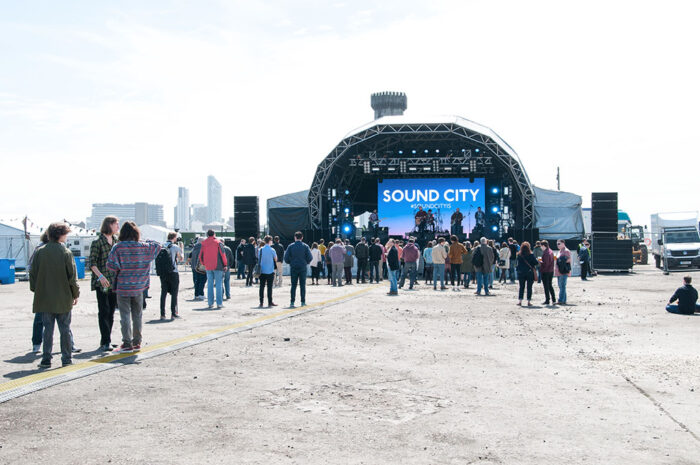 Louder Than War’s photographer Melanie Smith and reviewer Rick Leach team up for the first time at the wonderful Sound City 2015 in Liverpool – its a bit of an overcast gloomy day but the music and atmosphere was far from it.

Usually at 5.30 p.m. on a Friday evening I would be driving along Regent Road in Liverpool on the way home from a week in work, possibly thinking of nipping to the chippy for tea. However, on Friday 22nd May 2015, it was a bit different. I was heading in the opposite direction and towards the venue for Liverpool Sound City 2015, relocated from a myriad of venues scattered across the city centre to a new single bespoke location for 2015 by the side of the river at the Bramley-Moore Docks. Behind the thick dock walls, three days of music was lined up, some by artists I loved, some by artists I’d heard of (but never really heard) and some by artists completely unknown to me. Here follows my brief and pretty subjective review of what I saw those three days. I definitely missed some artists because I couldn’t be in two places at the same time and some, well, maybe I caught them on a bad day…

First off to kick off the whole shebang were Neon Waltz at the main (Atlantic) stage. Under a grey and blowy sky they threw a mild West Coast/ mid 70s vibe to a crowd of a couple of hundred or so curious punters who’d walked past the other stages beyond the entrance. (At this point, it might be helpful to put it into a bit of context. This wasn’t a vast Glastonbury-sized site, stretching on for acres and acres. Along with the main, open air Atlantic stage, the other main stage is an old and large brick warehouse, The Baltic Stage. There were two or three other tents doubling as stages and one smaller open air stage. You could walk stroll slowly from one side of the side to the other easily in 10 minutes or so.) 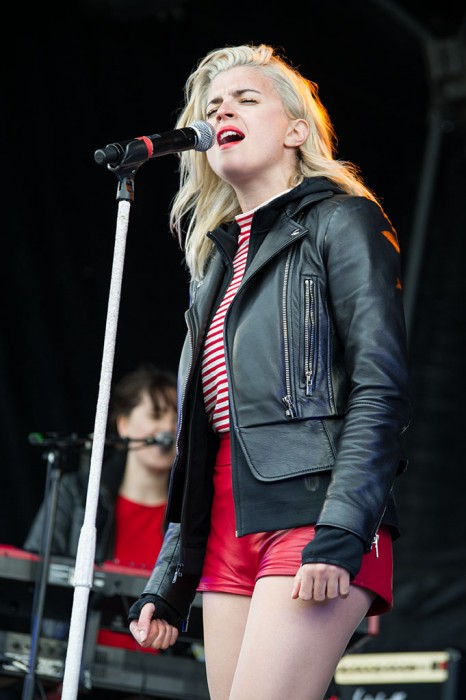 So Neon Waltz seemed to go down fairly well. Not an easy slot to fill, the opening slot on the main stage, but maybe people were willing to give them a bit of a chance just because of that. It was a curiously laid back choice to start the festival off with, though. If they played a tad slower, then they would have been a carbon copy of Tame Impala, all blissed out and the like; or if they sped it up a notch then they could have passed off for The Monkees. Not a wholly bad thing, I supposed.

After this, I wandered back past the other small open-air stage to see what I found out was Holly Siz ripping it up, like the offspring of Blondie and The White Stripes. Holly Siz is a French singer who was certainly not short of self-confidence. Anyone who can shout “Sound City, are you ready?” at the top of her voice to a bunch of 50 of so people wrapped up against the elements, without seemingly displaying a trace of irony has to have something going for her. It was all a very poppy feeling and she totally threw herself into it, crashing to the stage floor on a number of occasions and striking such clichéd poses with the lead guitarist that you couldn’t help but smile at the sheer ridiculousness of it all.

Next up, I ended up watching Liverpool’s own Bad Meds at the Baltic Stage. My scribbled notes read “odd in a good way and good in an odd way.” This lot would be worth looking up again. If you can cover the KLF’s “It’s Grim Up North” and make it sound as if Big Black are playing it then you have to have something going for you. 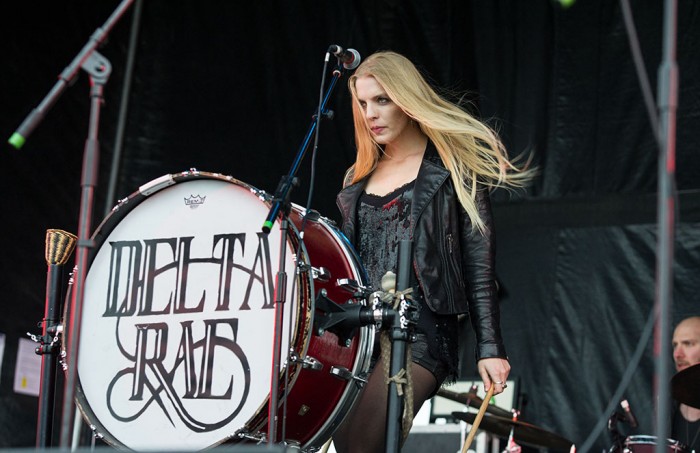 After this, a bit of Delta Rae at the small outdoor stage. They sounded slightly Americana/big hair and radio friendly, but didn’t look that way. Harmonising female vocals, good musicianship, all very professional and that, but it wasn’t my cup of tea.

It started to drizzle, so I drifted back to the dry and frankly cavernous Baltic Stage to see YAK where I was met with a wall of sound. Very, very loud. And if it was this loud at half six, god know what it would be like when Swans headlined at the end of the night. A very good sign of things to come. There was a loud rumble of bass, like a twisted 50s surf song, mangled almost beyond recognition followed up with a whole bucket load of shoutiness. It was how I’d imagine Spacemen 3 would sound if they’d necked a whole crate load of Sunny D in 10 minutes then jumped on stage. Were there two drummers? No, but it sounded as if there were. An older security guard standing next to me looked especially unimpressed. This was not normally what you would hear along Regent Road on a Friday evening but it would do for me! 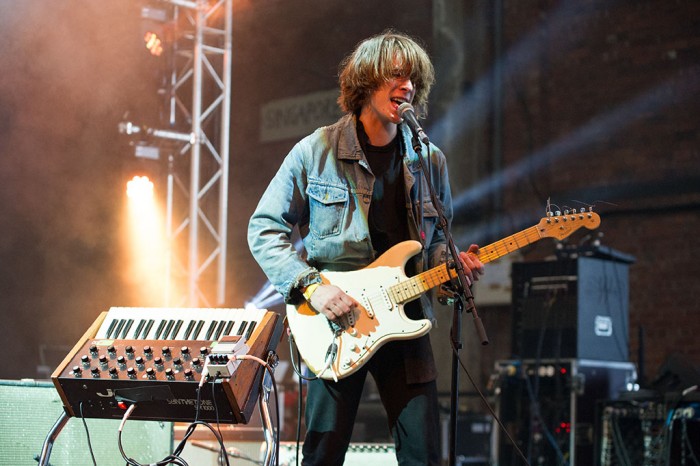 I followed this great noise fest up with Circa Waves at the small North outdoor stage. Local heroes, all young lads, and incredibly boppy and poppy. How you would imagine Arctic Monkeys would sound if they hadn’t turned shit. Hook-ridden songs, short and snappy. Smiles all round, both in the crowd, which grew and grew as the set carried on, and from the band themselves, who all seemed to have a good time. This was music to warm you up.

It was now nearly 8 o’clock and I’d been there for three hours or so, seen a fair few bands and missed a whole lot more. The best thing about festivals (as opposed to ordinary gigs) is that you never know what you might end up seeing. Something unexpected and unplanned. Sometimes this doesn’t work out too well and that’s what you have to live with but, on the other hand, sometimes you may just stumble across something magical. And that’s for me what happened at the Baltic Stage where some unknown band were replacing the cancelled Slaves. Swirly as swirly could be. Space rock from the outer reaches of the galaxy. Waves upon waves of crashing sounds, crashing storms yet storms in a good way; math rock, intricate prog rock with a loud and intense, almost jazz and funky background. This doesn’t sound very promising, does it? I can assure you that it was far from Mahavishnu Orchestra bollocksy noodlings. This was the sound of collapsing stars and universes dying and being born again. It went on for ages and ages. A guitarist with big, big hair, lost in the moment, a bassist plonking the very life out of his instrument, a shaven-headed chap bent over keyboards squeezing previously unimaginable sounds out of electronics and a drummer who seemed to have the prowess of a very well coordinated octopus. It was magnificent and it wasn’t only me who thought so. The warehouse was filled with people similarly transfixed. This bunch- a late, late addition- were Tiny Fingers, an unknown entity to me, from Israel. They are well worth looking into and if you have the chance to see them, then please do. You won’t be disappointed. 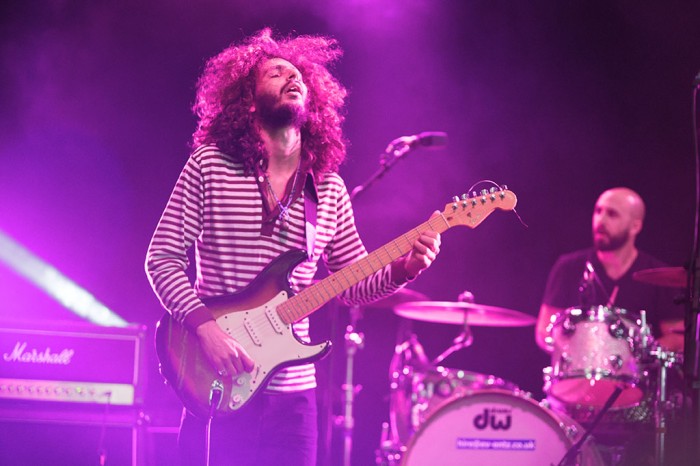 Which, I am afraid I was by Everything Everything back at the main stage. I only lasted two songs, so probably I hadn’t given them a fair enough chance to impress. It was getting really cold as well. The wind was blowing off the river and chilling everyone to the bone. Maybe they weren’t the right band to play at that time of night. Maybe I have some unfair prejudice about any band who wears colour coordinated, matching stage outfits. It all seemed a bit Summertime Special, end-of-the Pier, Radio 1 stuff to me. A bit forced, and a bit too studied. No passion. So after 15 minutes of it all I sauntered off to get ready to see Swans headline the Baltic stage and finish the night off. Ah Swans! A band, who although I’ve liked from a very early stage, I’ve never actually managed to see live. Tonight was going to be that night!

Swans opened with an improvised cello performance that lasted about 10 minutes. A few people headed for the exit; this was not what they expected from a festival headliner. Meanwhile, I was sitting at the back of the Victorian warehouse with a coffee and unwrapping a Werthers Original, rad as fuck and ready to rock. I glanced through massive open doors to see the sky turning black and night falling as Swans came on stage. Very appropriate. I have never, ever heard anything as loud as Swans were that night. It was beyond loud; the very bricks and mortar of the building were quaking. And yet, it isn’t just noise for the sake of volume alone. There was a preciseness to it all, an orchestral quality, something measured and truly considered. At one point Michael Gira gently rattled some small thimble bells very closely to his microphone; it sounded like a tiny sparrow on the edge of a hurricane, fighting against the elements, fighting against nature, struggling (and succeeding) to survive. 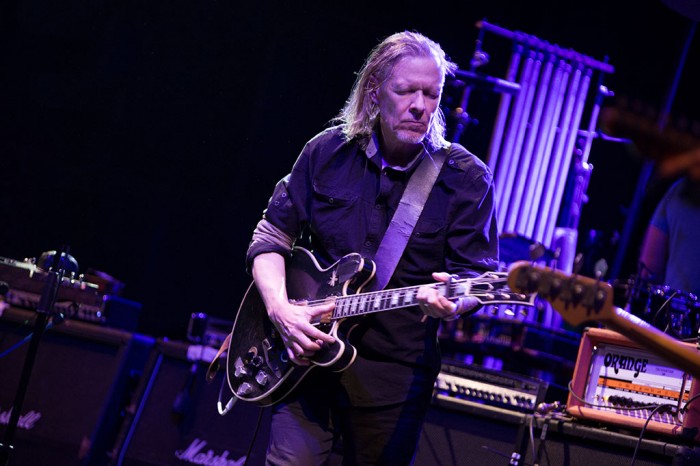 An hour in and I think we’d heard maybe two or three songs, but that hour went by so quickly. Just when I thought it couldn’t get any louder, then it did. I swear that one of my eyeballs started to vibrate in sympathy with the music. Because that what it is; music, rather than noise. It’s much too simplistic to write Swans off as mere noise merchants; there is a distinct point to what they do.People were drifting in and out. I am sure that at one stage there were definitely less people in the audience than when Swans started and yet I do think that without staying for the whole thing then you would have missed out. After nearly two and a half hours it was all over. Two and a half hours! Almost Springsteen-like.

Sticking Swans on to headline the opening night was a very brave choice for Sound City and even if the rest of the weekend was going to turn out crap well, at least, I was going home with ringing ears and the jolly tunes of Gira and the lads to send me to sleep.

*Note: Louder Than War photographer Mel in the meanwhile was scouting around most of the smaller venues checking out the bands of the future, bands from across the seas, plus established bands such as The Vaccines and Spector, who both went down a storm on the main Atlantic stage..

All photos and by Melanie Smith whose website is here. More photos by Melanie on Louder Than War can be found here. She can also be found on Facebook and Twitter.
Words by Rick Leach, find him on Twitter  and Blog.