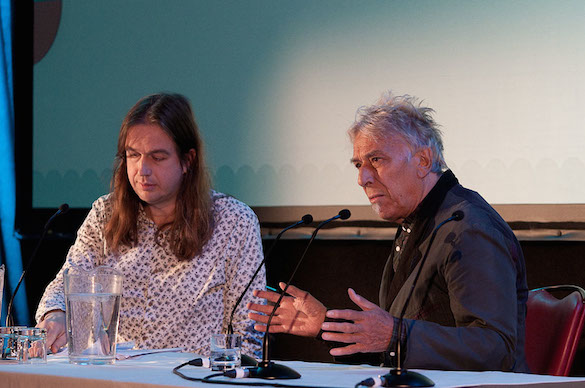 My alarm tells me it’s time I got up, I can’t believe how much I ache from trawling my camera gear around the streets of Liverpool all night, but what a blast.

It’s the last day of the music conferences, and they started promptly at 10am, meanwhile I was in my room, trying to recover, plan my agenda, and do some research on the LSC app. I’ve chosen 21 bands in all, but in reality not doable, due to clashes in stage times. I exit said room in plenty of time for another music legend waiting to be interviewed in The Circus Room – John Cale (see photo above). It was an excellent interview conducted by John Doran from The Quietus online magazine. They even have to open up the room to make way for the massive crowd who have entered to hear the Welsh man speak. He’s certainly looking very good, and regales us with tales from his musical past and present. As John was introduced he spied upon a certain someone on the front row – Warner Brothers / Sire records director Seymour Stein (he also happened to sit behind me for breakfast the following morning). You can see videos from the interviews on the Sound City webs site.

So yet another eclectic day of music ensues, kicking off in the outdoor space known as Moon Museum, starting with all girl band from Canada Powder Blue, a bit of a chilled start to the day. 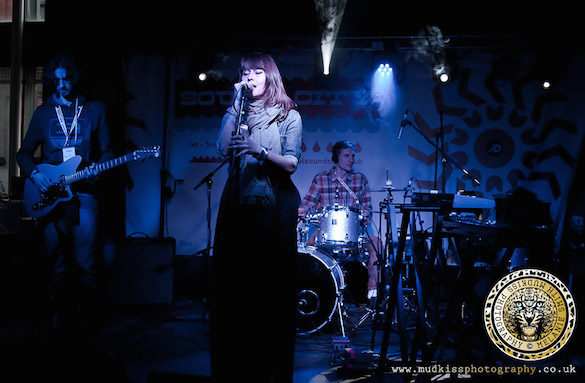 Russian band Cats Park (see photo above) are over at The Factory, they sounded pretty interesting, so I dash over there, a bit of melodic soft rock. Liverpool based Female cappella trio Barbieshop (see photo below), described as “like modern day Andrews Sisters” are on the bill next, but now I’m wanting something a bit more thrashy and loud. I charge back to The Factory for the mighty guitar sounds of Dolomite Minor, a talented duo from Southampton. 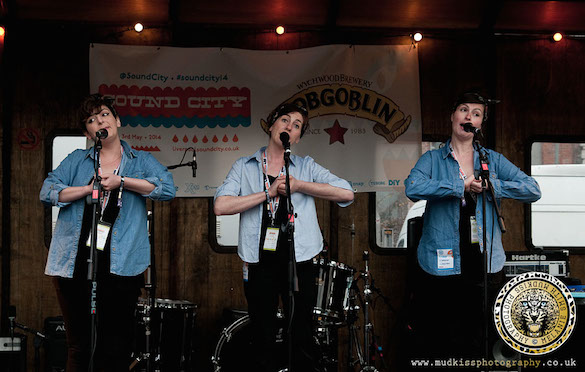 I was tipped about the next indie pop style London band Happyness, so checked them out at The Shipping Forecast, finally meeting Keith Goldhanger (reviewer for Louder Than War) inside. A place I’d yet to visit was Screamadelica at The Black-E, it looked an amazing place from the outside, with a huge dome, inside is even better, it’s like an American prison with a huge ceiling with three floors where you can view bands from balconies all round the room. By far my favourite venue of the festival, it also has an amazing collection of original posters. A band just so happened to be playing, and they happened to be fantastic, they were Vault of Eagles, a three piece rock band from the Midlands. 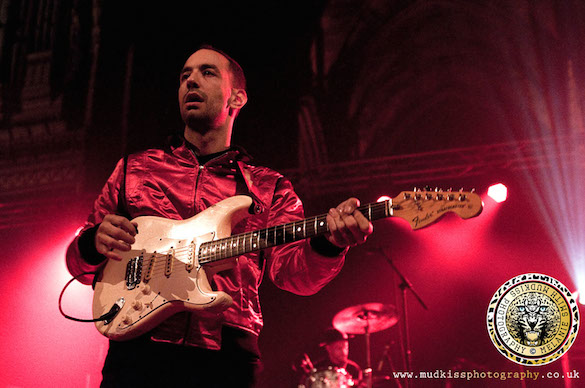 We are halfway to the Cathedral now so we check in with Strokes Man Albert Hammond Jr (see photo above), he is pretty good, and its great to photograph someone who chooses his outfit with a bit of style. Taking the road back to the main streets I check out former Kid British vocalist Bipolar Sunshine, at the East Village Art Club Loft, I can’t stay for more than one song as its rammed, boiling hot and claustrophobic. I head upstairs to see Wolf Alice, but that’s even worst, no room in the pit, so dismayed I moved down the road to The Zanzibar to catch Blackpool’s darling Rae Morris for a bit of a mellow soulful session.

Heading out I bump into Keith again and we chew the fat for 10 mins before catching William Doyle’s latest project East India Youth at the Nation. It’s a man and his keyboards and apple macbook, but he’s churning out some awesome sounds, with a backdrop of moving images.

I catch the last song from soul singer Moko from London at The Factory and bump into the lovely Amazing Radio Dj Shell Zenner checking her out too. 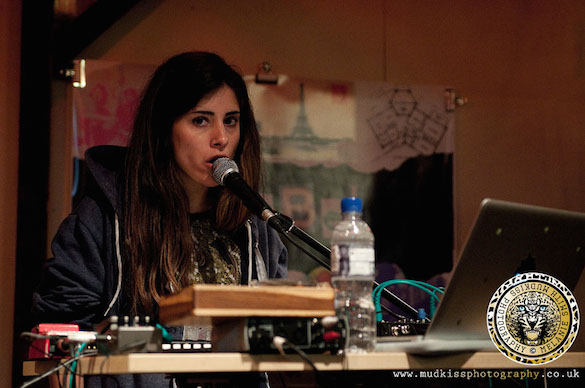 The electronic folk artist Nadine Carina (see photo above) from Switzerland is playing over the road in the Kazimer Gardens, she’s very tiny and sweet. Mello Mello is a great chilled out bar on the corner of Parr Street, I head there and catch up with Andy Von Pip from VPME website, thevpme.com (he knows his stuff) Sheffield band Blessa are playing their last song as I arrive. The super cool girl of the moment seventeen year old Chloe Howl is on at The Factory, she is great to photograph and sounds amazing too. American rock band The Hold Steady are playing the Garage, I get there quick before the queue starts, its all kicking off the band are on fire, and its my last band of the night. My work is done here for another night.