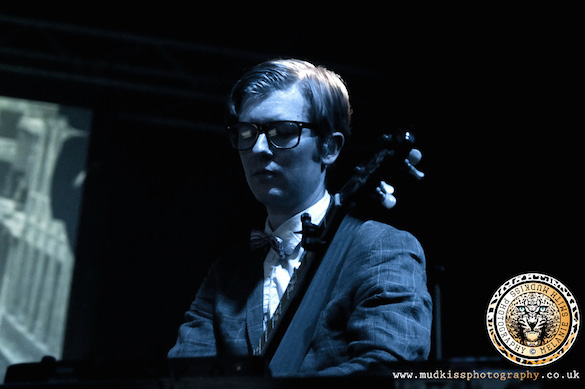 It’s check out of the hotel today, the music industry people have left the building as the conferences are over and I’m off home for a few hours.

Back just in time for tonight’s shenanigans to catch a big noise on the local scene Bird (see photo below), fronted by the petite Adele Emmas at the Anglican Cathedral; they’re such a perfect band for this type of setting. I last saw them in 2012 at LSC playing in a small venue, with dinky fairy lights and flowers, but my how they have matured, a lovely little set with dreamy atmospheric vibes. 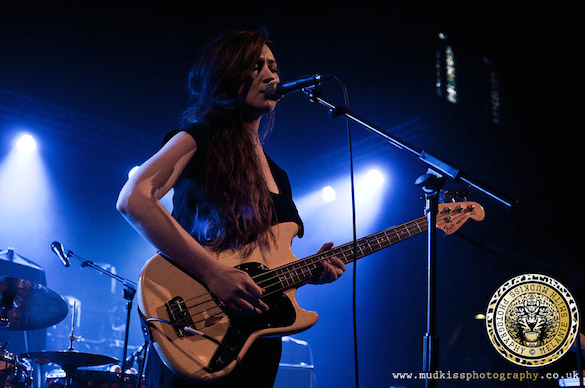 There’s something about Liverpool and its people, it’s bursting with creativity, the 30 or so venues chosen are so imaginative; warehouses, grand buildings, clubs and old garages are all pretty close by. It’s a blast going from one to another at night without any hassle. I did notice tonight there was a lot more people about, and not all at the festival, stag and hen party gangs are out and the local women stagger and sway in towering heels which they can barely walk in … but back onto the music.

It’s the turn of Dublin based September Girls next to show us what they can do with their dreamy pop riffs, heavy drumming and fuzzy guitars in the EVC Theatre. It’s a tight squeeze in the pit (I had to blink twice when I saw someone with an ipad in there). The stage has a misty haze with a splattering of yellow lights, all conjuring up a decadent 60s poppy feel. Across the road in Studio 2 is a multi-instrumentalist from Dublin, an artist whose name I wouldn’t even try to pronounce – Fjokra (see photo below). A colourful bunch, wielding dustbin lids, and a playing a variety of musical instruments and styles. 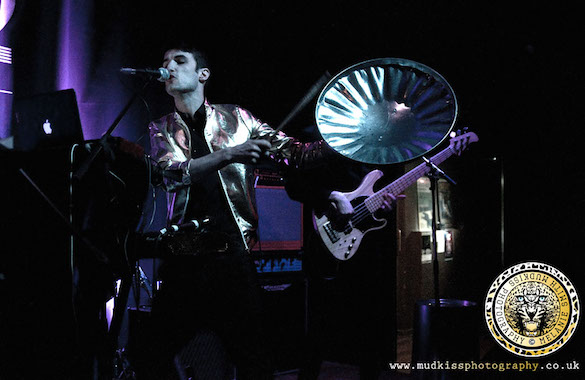 Four piece ‘ones to watch’ Manchester band Embers are creating some waves at the moment. Their sound is massive down at the Garage, and I was so into them that I had to jump a taxi to get to the Cathedral just in the nick of time to photograph the Irish rock band Kodaline. Singer Steve Garrigan seemed genuinely honoured to be playing here tonight and took a moment or two to look around at its vastness. The place was packed out, with a further massive queue outside, hoping to be let in, I enjoyed what I saw, but had to dash out again to shoot a band I’d been waiting to catch live. The Shimmer Band are a five piece from Bristol, who recently supported The Strypes, and I’m so glad I caught them at The Factory, with its atmospheric lighting whipping up a storm of psychedelic rock music. From some angles the singer reminded me of a crazed Nick Cave, mixed with traces of Iggy Pop, and it was certainly entertaining. Definitely ones to watch out for! 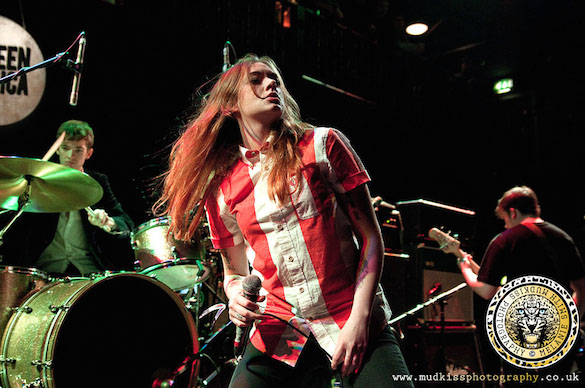 One of the highlights of the night for me was undoubtedly the chaotic, mash up metal rock band the Marmozets (see photo above), (although being pinned up against the tightest of photo pits wasn’t that much fun, but it certainly made it memorable.) Escaping onto the balcony to watch further, it was frenzied and exciting and towards the end of their set the drums were dismantled and hauled into the centre of the mosh pit and this is where I departed for the next act, which was rather tame and controlled in comparison. Ladies and Gentlemen let me present widely acclaimed London based duo Public Service Broadcasting (see photo at top of page), who appear like University lecturers, showing old public information film reels to music samples, drums and all kinds of techno wizardry. The house is full and I shoot a couple of photos and with no chance of getting in for Jagwar Mar or The Kooks I decide to head home. Exhausted yet feeling a sense of accomplishment, my journey has ended at Liverpool’s Sound City 2014, and what an adventure its been!