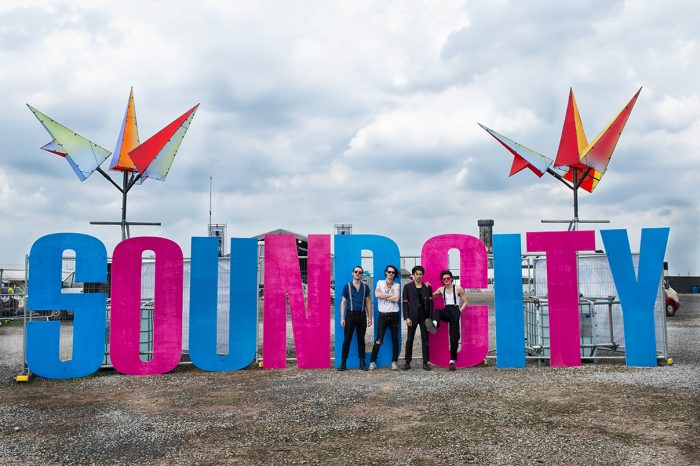 10 years have passed since Sound City Music Festival started out amongst the venues around town, this year it was taking place at the Clarence Dock over 4 days.  Roxy Gillespie (words) and Melanie Smith (photos) went to check it out for Louder Than War on Saturday.

The weather may have taken a downward turn from Friday’s sunshine but the early crowd at Liverpool Sound City didn’t seem deterred. With exciting music coming from all over the site, they were already spoilt for choice.

The smaller stages were in full swing by 12.30, kicking off with energised local band Generation, who really tore into their set with such passion and excitement, channelling the likes of The Ramones and Johnny Thunders.


Solo artist Mozart’s Sister had the 2 o’clock slot on the Pirate Stage bringing some R n’ B with interesting Kyoto-style electronic beats to the stage.

The Baltic Stage had a ‘Brass Off’ with two brass ensembles vying for the crowd’s approval. Bringing some unusual pieces such as an S-Club 7 number to the stage, the crowd were loving it.

On a completely different theme, Tim Peaks Diner had some treats in store with an hour or so of Burlesque from the Martini Lounge. 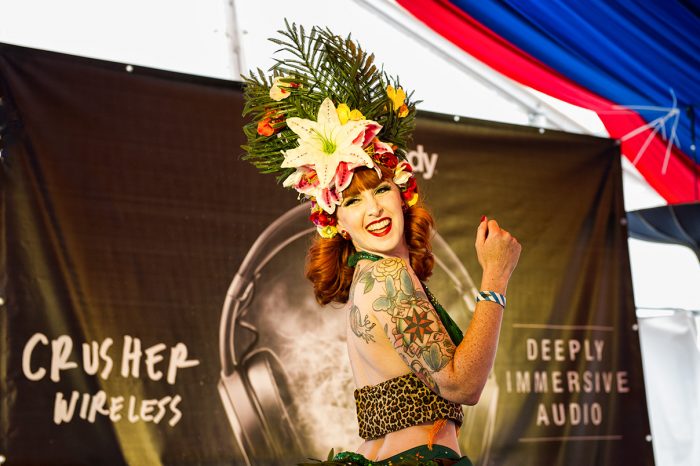 A little later we had an audience with the Legendary John Cale. The tent was packed for the interview conducted by Dave Haslam. We were given a fascinating insight into the musical life of the performer who had wowed Sound City the night before with his Velvet Underground & Nico Re-imagined evening, which featured guests The Kills, Nadine Shan and Fat White Family amongst others (see review and photos on Louder Than War).

This was followed by an interview conducted by Jennifer Bickerdike with equally interesting New York music legend Danny Fields, renown for signing Iggy Pop & the Stooges, MC5, Publicist for The Doors, hanging out with Andy Warhol and the Factory crowd and managing The Ramones. If you want to know more about Danny check out the film called Danny Says, now showing on Netflix.

Fickle Friends brought sunshine on a cloudy day to the main Atlantic Stage with their up-beat vibe and some sweet female vocals. Music to dance to.

Lucy Whittaker brought her lively young sound to The Cavern Stage with some out-and-out pop to the delight of the gathered onlookers.

Back at the Pirate Stage there was some serious rock and roll going on. The Surrenders were bringing some bluesy, meaty music to the gradually increasing crowd. This assured performance included some fine guitar work. A number of influences such as surf on the track Pursuit of Love came into play making this a vital performance. 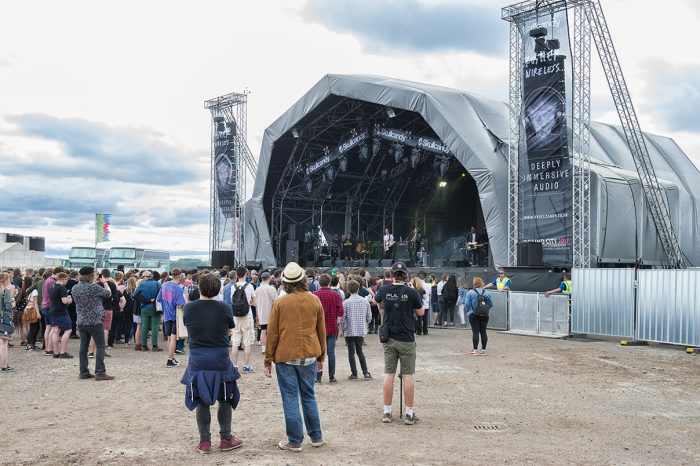 On the Atlantic Stage, Carl Barat and The Jackals where bringing their brand of indie rock. When Barat sung ‘We are not afraid anymore’ the crowd were with him. There were hints of The Clash in his vocal style on some of the tracks. He had a cockney swagger that went well with the fine guitar work and general high standard of the music. The set was an argy-bargy rock and roll extravaganza.

Bang Bang Romeo had a great stage presence and excellent vocals from Anastasia Walker. The keyboards also brought a lot to the set. This performance on the Pirate Stage was hard hitting and impassioned. Another indie rock winner.

Touts on the Baltic Stage gave a rip-roaring performance, tearing through songs like new single Gloria with vicious intensity. Just the thing to brighten up the increasing greyness of the weather outside.

The Paves had a Mick Jagger 1960s look-alike for a singer in Luke Shield so they had a lot to live up to. Their music was more animated indie than anything retro, topped with gutsy vocals. Another crowd-pleaser of a set on The Pirate stage.

Gang of Youths started late at Tim Peaks Diner. It was worth the wait for the expectant audience as they tore through their high-octane set once things got going. The vocals had a Phil Lynott edge, but the content was very different than Thin Lizzy. The band were very physical from the outset, with singer on and off the drum podium and into the audience. The sound was in-your-face rock with plenty of indie guitar work and the crowd lapped up every last musical drop. Another great act at Sound City 2017. 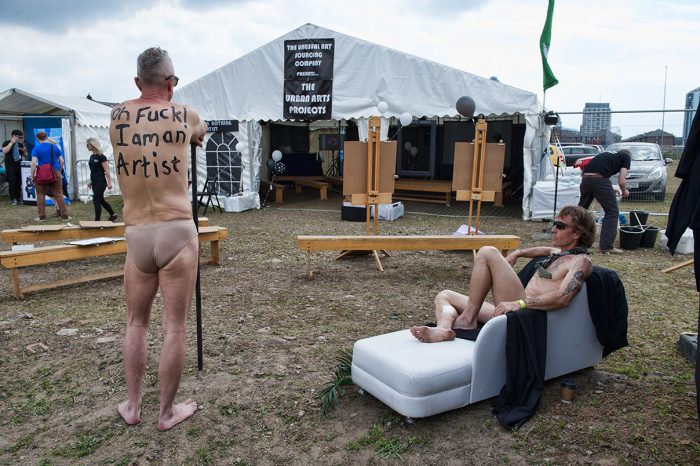 The current buzz around The Hunna saw a good crowd at the Atlantic Stage. The band have a lot to offer for lovers of pure indie rock and they were not disappointed. The crowd lapped it up.

Francobollo on the Baltic stage had a brilliant quirky sound and a bubble gum edge that really set them apart. The high-pitched vocals overlaid some pretty bombastic music, which worked much better than you would think. One of the most intriguing and original bands of the day.

For pure showmanship, the vocalist Tom Nosek of Sleeptalking won best in festival. The fiery rock and pure adrenaline-fuelled feel of their incendiary set was bolstered by the on and off-stage shenanigans. No barriers could keep them contained with Nosek singing from the audience on tracks like Lazy Bones. Scaling the staging, Glasshouse was delivered from the canopy to the consternation of security. A stunning show that should only increase the fan base of this new band.

The guys from Vant took to the main stage with swagger and attitude and managed to pull a decent crowd.

Slaves are a known quantity with their furious punk and the Sound City 2017 crowd loved it. The music is visceral. The drums beat the rhythm to the tribes of discontented youth, pulling them from their stupor. Their set had all their hits, including White Knuckle Ride. The huge crowd were with them all the way and they certainly raised both the tempo and expectations for the rest of the evening.

If melodic feel-good indie was more your scene, Echotape played a terrific set for the Pirate Stage crowd. The lively set and stand-out vocals saw the crowd increase throughout the set. There was even some crowd participation as a crowd member was invited to play on stage for the last track Somebody. Echotape have played the festival before and hopefully will be back again.

Pink Kink always bring something exciting to their stage show and their Baltic Stage performance was no exception. This was a powerful set with their mix of bouncy, riot-girrl numbers, colourful outfits and extreme melodies. The variation makes for an exciting Sound City 2017 show. 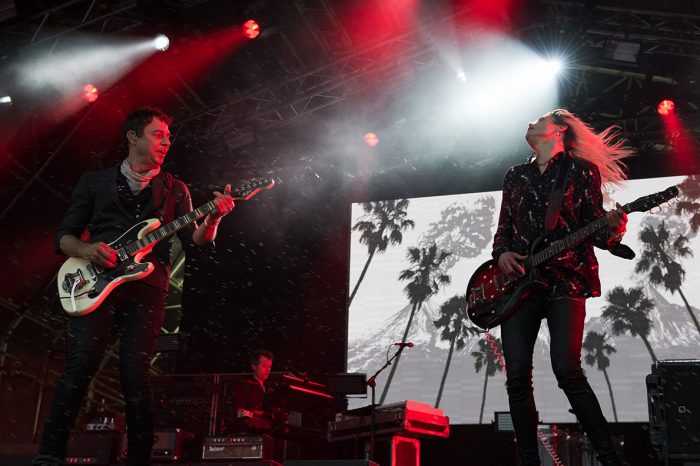 The Kills were another great line up for Sound City this year and they didn’t disappoint, far from it. Explosive and powerful on the Atlantic stage, blasting out songs both new and old.

Yak seemed to have everything against them. Kept late by over running of the previous set the band had virtually no time to set up. The drizzle may also have deterred the crowd who had headed to the inside spaces, but the front of the stage was by no means empty. The set may have been short, but it was sweet; a real gem. Oli Burslem was a little discouraged but still gave the crowd real favourites like Hungry Heart, Victorious and Smile. Fighting the curfew till the last the band played till the instruments were turned off, joined by members of Sleeptalking, whose guitarist made another upwards excursion on the staging, whilst Tom Nosek sung with Burslem as the set dissolved into chaos. A sorry way to treat a band who deserved better and strove to give the crowd their usual excellent set under the most difficult of circumstances. 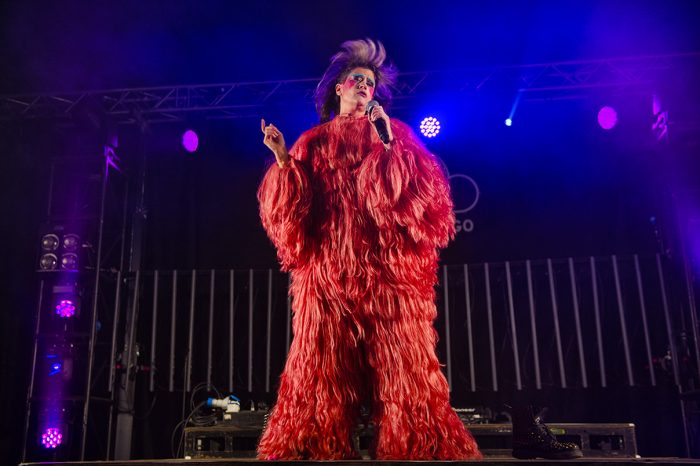 Our final act of the night was in the Baltic tent, it was packed for Peaches, always popular with the Liverpool crowds. Her mix of over the top costumes and explicit lyrics and show makes for a hedonistic treat. Starting the night with a vagina hat in situ, she tore through her hits. Shocking and exciting, this was always going to be the highlight of the festival and what a great end to the day.

Find out more about the Festival here at their website